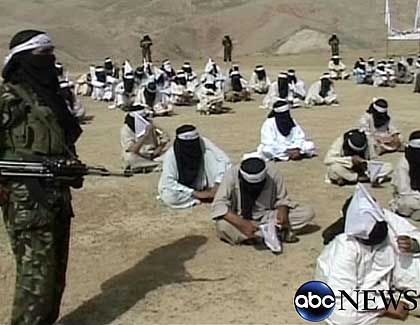 A Taliban training camp in the Afghanistan-Pakistan border region.

A small welcoming committee was waiting for the two Afghans, arriving from Karachi, when they landed at Zürich airport. Agents from Germany's Federal Intelligence Service (BND) received the men at the gate and immediately bundled them into a limousine for the five-minute drive to the Hilton Airport Hotel. The two robed Muslims were welcome in Zürich, but secrecy was a top priority. The guests had to use a service entrance at the hotel -- and the BND had reserved a suite on the sixth floor under an assumed name.

Just who the Afghan visitors were has remained a carefully guarded secret to this day. But the reason for the discretion is clear: The men, who visited in Zürich in July of 2005, were delegates from the Taliban, a group allied with al-Qaida and which regularly plants bombs in Afghanistan, targeting US citizens and soldiers, and sometimes Germans. On Wednesday of last week, three German policemen were killed by an anti-tank mine buried by the side of a road. The Taliban took responsibility for the attack, but it remains unclear whether it was directed at the Germans or at a platoon of US troops traveling along the same road.

The sensitive question as to whether or not the German government should begin a dialogue with the group -- considered a terrorist organization by the United Nations -- is currently nagging politicians in Berlin. The country's official policy is unequivocal: no contact with terrorists is allowed. Chancellor Angela Merkel's conservatives (CDU) have been particularly clear on this point.

Like last week. Thomas Steg, deputy government spokesman and a member of the Social Democrat Party (SPD), made a careful remark saying that the issue was that of getting "moderate, reasonable Taliban who are interested in reconstruction and reconciliation" to commit to the peace process. The conservatives promptly intervened.

Chairman of the Committee on Foreign Affairs Ruprecht Polenz (CDU) warned that such suggestions could "undermine the moral basis for German and international engagement in Afghanistan." Karl-Theodor zu Gutenberg, a conservative foreign policy expert from the Christian Social Union -- the CDU's Bavarian sister party -- remarked mockingly that, aside from Steg and SPD party leader Kurt Beck aside, he knows "no one who has ever met a 'reasonable Taliban.'" Germany's conservatives reacted similarly in April, when Beck pondered the participation of "moderate Taliban" at a new peace conference.

The SPD, on the other hand, cites studies such as one by the German Institute for International and Security Affairs (SWP), which cautiously suggests there may be hope of creating rifts within the amorphous, decentralized Taliban.

The SWP's Afghanistan experts have identified a hard core of ideologically and religiously schooled mujahedeen leaders surrounding Taliban leader Mullah Omar. This hard core is surrounded by a second circle of Taliban, consisting of indoctrinated students from religious schools in Pakistan and foreign sympathizers. But the periphery consists of militants from Pashtun tribes and other groups that fight as paid mercenaries against US troops. The gangsters who kidnapped German engineer Rudolf B. five weeks ago and have since been trying to obtain a ransom for him probably come from this layer.

Talking with the Taliban

Such "local, non-ideological agents of the insurrection" could at least be integrated into the reconstruction process, according to the SWP study. Volker Perthes, director of SWP, believes that, given the current situation, "there will be no way around negotiating with parts of the Taliban" at some point. He is backed by high-ranking German military officials, one of whom takes a particularly sober view of the situation: "When you go to a party, you just have to dance with whatever gals are there," he says.

The Zürich talks in July of 2005 -- which officially never happened -- are instructive in this regard. Under the supervision of then BND director August Hanning, contact with the Taliban was established via a middleman in Afghanistan. Two Taliban from what the intelligence agents call the "middle management" were selected: a stocky, impulsive man nicknamed "the commander" and said to already have fought the Soviets under Mullah Omar; and a younger, more reserved Afghan who acted as an advisor. Both allegedly belong to the circle of people around the Quetta Shura, the Taliban's council of leaders.

Getting the two visas proved easy enough. The lower right leg of the "commander" had been amputated following a battle injury, leading agents to invent a plausible story. The "commander" told visa authorities he had lost his leg in a traffic accident and that he and his companion were now "on their way to a special clinic." The orthopaedics department of Zürich's Balgrist University Hospital is considered one of the top addresses for prosthetics.

The BND is probably the only German agency capable of manoeuvring in such a sensitive gray zone. The foreign intelligence agency has already negotiated with Hezbollah and the Khmer Rouge, and it does not shy away from contacting murderers and rogue states when that seems helpful. The secret meeting in Zürich, which was coordinated with the chancellery in Berlin, took place on neutral territory in Switzerland for good reasons. It was important not to create the impression that the government was negotiating officially. It was a question of learning more about the Taliban without officially embracing them.

Everyone Talks with the Taliban 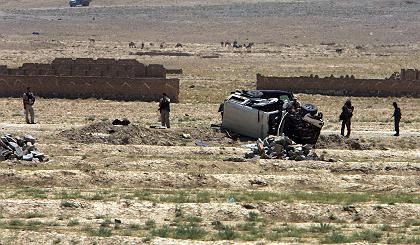 The intelligence agents went out of their way to ensure their Afghan guests had a comfortable stay. No maids interrupted the talks. Lunch and dinner were delivered directly to the suite - but only by men, so as not to offend the Afghans' sensibilities. The hotel staff removed all alcoholic beverages from the mini bar; they were replaced with tea, water and Coca Cola. The talks lasted three days, with prayer breaks in between.

The BND was pursuing one goal in particular: It wanted to know whether or not the Taliban were prepared to withdraw from al-Qaida's embrace. Creating a rift between the two groups is considered by the West as a precondition for the lasting success of Operation Enduring Freedom in Afghanistan. In return, the German government would intensify its involvement in reconstruction by building hospitals, roads and mosques -- the sorts of projects that the German public tends to support.

The Taliban demanded political recognition of the kind once given to Yasser Arafat's PLO. "We do not want to be considered terrorists. We want to be treated as a political force," the "commander" is said to have demanded, whereupon the agent leading the BND's three-man delegation is said to have responded: "Then break with al-Qaida." The BND agent outlined a multi-stage process in which Berlin would begin by offering civilian aid, to be followed by regular talks - at which point recognition of the Taliban as a political party could be discussed.

The current debate in Germany makes it seem as though the offer made by the BND was a uniquely German idea. As though Berlin had opted to do an end run around the back of its allies. As it happens, nothing could be further from the truth.

In September of 2006, for example, British troops in the city of Musa Qala in southern Afghanistan agreed on a highly controversial truce with the rebels: The British soldiers promised to withdraw from Musa Qala in return for the Taliban guaranteeing that they would stay away from the city and allow the Afghan government in. The agreement was mediated by local tribal elders.

Even the US, which officially refuses all contact with the Taliban, have repeatedly used mediators to discreetly gauge the willingness of the insurgents to talk. The BND coordinated its secret talks with the US intelligence agencies, and European countries such as France were also in the know. "There was a time when many Western countries spoke to the Taliban," says one German government official.

For Afghanistan President Hamid Karzai, keeping the door open for the Islamists has become a survival strategy. In 2005 --- simultaneously with the talks conducted by the BND -- Karzai created a commission to prepare negotiations with the Taliban. In May of this year, the upper house of the Afghan parliament voted in favor of direct talks with the militants. "Afghan Taliban are always welcome. They belong to this country," Karzai said. Still the "atrocities" committed by men like Mullah Omar were a matter for "the people to judge," he added. Early this year, Karzai admitted there were "meetings between Taliban representatives and delegates of the Afghan government for an extended period of time." He also said he himself had participated in these talks.

The German talks eventually collapsed, apparently due to the insurgents' refusal to distance themselves from al-Qaida. The BND took that refusal to mean that the Taliban is not all that interested in civilian reconstruction. But the negotiations only came to an end after eight to 10 weeks of secret diplomacy. The German intelligence agency organized about half a dozen flights from Afghanistan to Europe, shuttling Taliban delegates back and forth. Sometimes the trips were disguised as family visits and sometimes as medical emergencies like that invented to explain the arrival of "the commander" and his advisor.

When the three days of talks in Zürich were over, the two Afghans did indeed travel to the University Hospital in Balgrist. They explained their request to the doctors responsible in English and showed them the wound, which had long since healed. The "commander" even shook the female doctor's hand, albeit unwillingly, and promised to return.

But that never happened: The BND terminated the sensitive project because the delegation from Afghanistan was unable to prove it was negotiating in the name of Mullah Omar and the Quetta Shura. Back in Afghanistan, the Taliban leadership is said to have criticized the "commander" and his advisor for this unsuccessful result. Since then, there have been no more talks.

From the BND's point of view, the decision to end the talks has since been proven the correct one. Since 2005, the Islamists have changed their strategy and -- like al-Qaida in Iraq -- are avoiding face-to-face battles with their technically superior enemy. Instead, they are focusing on explosives buried inconspicuously along roadsides, as well as on suicide bombers. Moreover, many civilian aid organizations have moved into the Taliban's crosshairs - such as the 19 South Koreans (out of a group that originally numbered 23) who have been held by the Taliban for about four weeks. The BND is sceptical as to whether renewed talks represent much of an option at present -- especially with its former negotiating partners.

In late summer of 2005, when the talks had already ended, the BND agents discovered that the names of both the "commander" and his advisor featured on a blacklist issued by the US authorities. The men were among the 200 most wanted terrorists in Afghanistan.