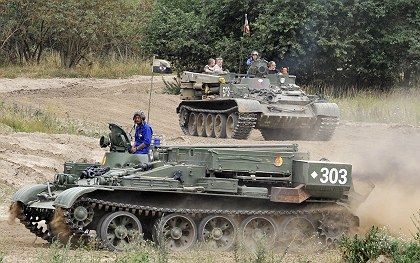 To the uninitiated, Father's Day in Germany comes as a bit of a shock. Motley crews of men drink until they drop, either in traditional fashion, tugging a handcart full of beer and spirits across the countryside, or by downing schnapps in a local bar.

This idiosyncratic celebration of fatherhood is held on the public holiday of Ascension Day. Also known as Herrentag or gentleman's day, a holiday dating from the 18th century, it is not just fathers who join the festivities.

But the rowdy gangs of inebriated men are not to everyone's taste. The annual event has long been criticized by feminists. Germany's Family Minister Ursula von der Leyen, a mother of seven, has also urged dutiful dads to spend the day playing with their kids -- and be rewarded with flowers and chocolates rather than booze.

The German travel agency TUI this year has come up with an alternative alcohol-free present for dads: tank-driving lessons.

"Tanks fascinate all boys, big and small," the company wrote in a press release this week. "We offer trips in armored tanks, driving around Germany's biggest playground for men -- it's an ideal gift for Father's Day."

Participating dads will get a short course in how to control the 14 tons of metal. Then follows a supervised half-hour drive in vintage Soviet armored vehicles, roaming a rugged practice field in the eastern state of Brandenburg. For an extra fee the pupils can plow their tank through an old car.

The courses at the Panzer Fun Driving School were the brainchild of Axel Heyse, 49, whose hobby started with an old Soviet T-55 battle tank he renovated with his brother in 2002. Now the business has some 13 tanks and 12 employees. Despite advertising themselves as "a men's playground," they say many women also take tank-driving lessons -- making up some 40 percent of their customers.