Typical 16 and 17-year-olds enjoy sleeping in on Sundays. But on May 22, those in the German city-state of Bremen will have a reason to greet the day a bit earlier. For the first time in their nation's history, they will be allowed to cast ballots in state elections after the local government decided to lower the voting age to 16 from the nationwide standard of 18.

Politicians in the northern port city have made great efforts to reach the young new voting bloc, with candidates spending an entire morning speaking with students at the city parliament and taking time to visit most of the area's schools. Local sports stars have also tried sparking interest among teens. Sebastian Prödl, a player for football club SV Werder Bremen, even made a bet with a number of school classes that their under-20 demographic couldn't beat voter turnout among 21- to 35-year-olds. If they prove him wrong, he'll teach an hour-long lesson for each class.

Prödl, 23, is from Austria, which in 2007 became the only European Union member state to change its voting age to 16 for all election levels. With a number of Germany's 16 states -- particularly those led by opposition parties -- working to follow Bremen's lead, the trend toward younger voting privileges could make it to the national level in the not too distant future.

In country's most populous state, North Rhine-Westphalia, the governing coalition of the Social Democrats (SPD) and Green Party wrote the measure into their coalition contract when they took the helm in 2010. Similar plans are underway in the state of Rhineland-Palatinate, also led by an SPD-Greens coalition, and in the southern state of Baden-Württemberg, where the Greens recently teamed up with the SPD to govern. In the city-state of Hamburg the Greens also recently presented a draft law to lower the voting age, which they hope to pass with the help of the SPD and the far-left Left Party. Meanwhile the SPD in the northern state of Schleswig-Holstein aims to add the change to the state constitution before the next election in 2012.

While the idea remains unpopular among Chancellor Merkel's conservative Christian Democrats (CDU), the zeitgeist seems to be turning against them as opposition parties continue gaining ground during the "super election year" of 2011, during which there will be a total of seven state polls. Advocates say that more youthful voters counteract voter apathy and the country's growing number of pensioners. They also say that bringing adolescents to politics at a younger age helps mould them into more responsible, civic-minded adults.

But opponents worry that the teens aren't mature enough to make a meaningful contribution to the country's political landscape. According to a study conducted by the University of Hohenheim, 16-and 17-year-olds possess "significantly more limited political knowledge" than legal adults -- regardless of their level of education. Others argue it is illogical to separate voting rights from those of legal adulthood. Why should adolescents be allowed to vote at 16 when they still have to wait two more years to drive a car or sign their own mobile phone contract, they ask.

"If you're trying 21-year-old suspects in court as youths, you can't simultaneously declare 16-year-olds to be mature citizens," says Heinz Buschkowsky, mayor of Berlin's Neukölln district.

Still others point to low youth voter turnout in municipal elections, a privilege allowed in about half a dozen states already. Sixteen and 17-year-olds in Lower Saxony have been welcome at municipal elections since 1996, but their turnout is consistently below average.

"There is nothing that points to increasing interest through cutting the voting age," writes election researcher Renate Köcher of the Allensbach Institute.

'Closer to the Problems'

Local Bremen political researcher Lothar Probst agrees. In 2007 he analyzed a "junior vote" conducted at 46 schools. While the majority of the students said they planned to vote, many ended up staying home. "Changing the voting law won't get young people interested in politics," he says.

But what studies like Probst's do reveal is that young people tend toward protest votes for opposition parties -- which may help explain why Germany's center-left, in opposition at the national level, is pushing for the change.

Young candidates also stand to benefit. Though the party rejected lowering the voting age, Bremen's CDU leadership approached 21-year-old Luisa-Katharina Häsler and asked her to run for state parliament this year in a bid to attract new voters. The political science and law student's political experience extends only as far as an internship with the party, but now she's considered to be a shoo-in for a parliamentary seat.

"I am just closer to all the problems," she says. 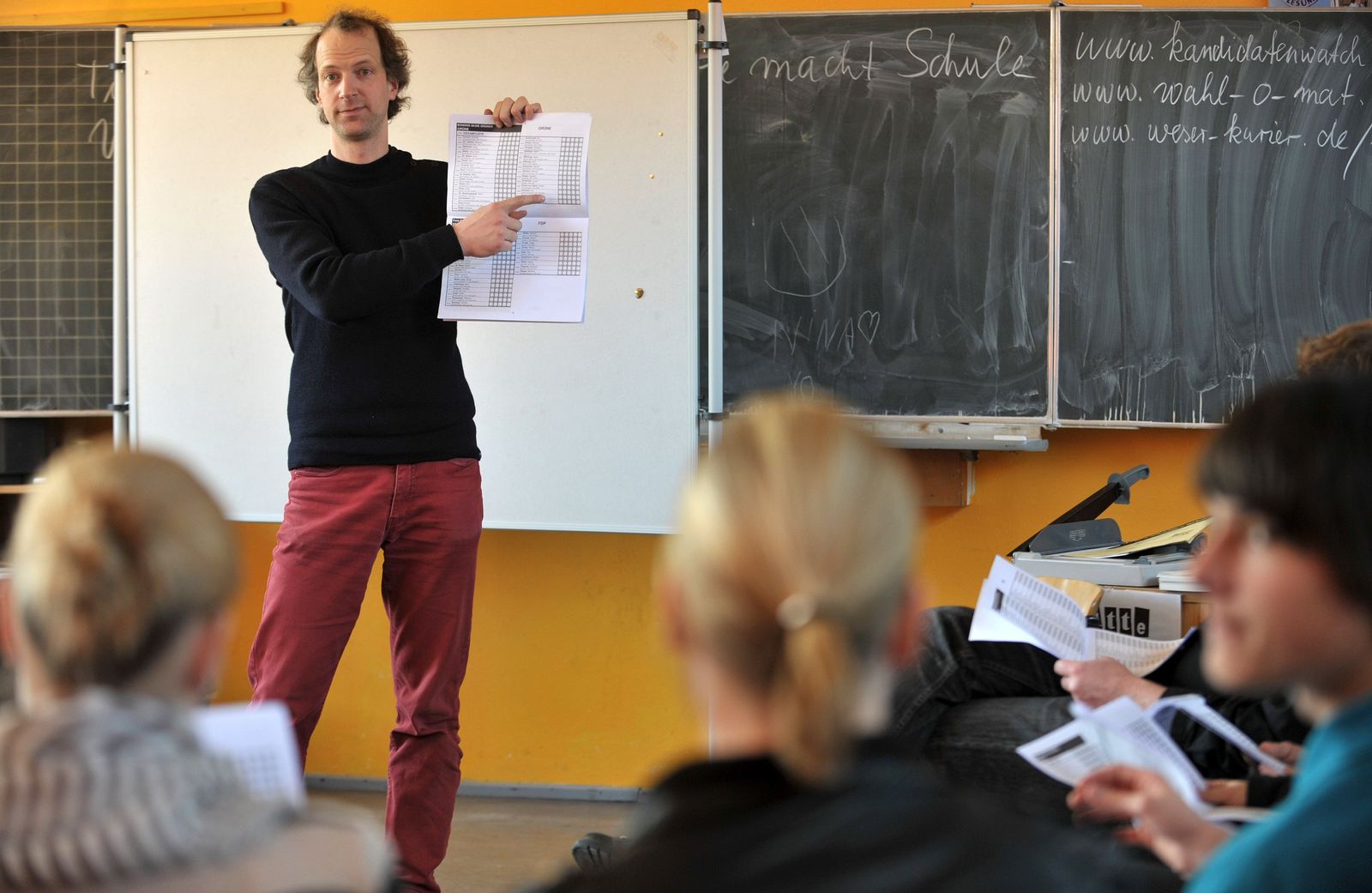 Tenth-grade Bremen students get instructions on filling out their ballots. For the first time in German history, this weekend 16- and 17-year-old will be allowed to vote in a state election.