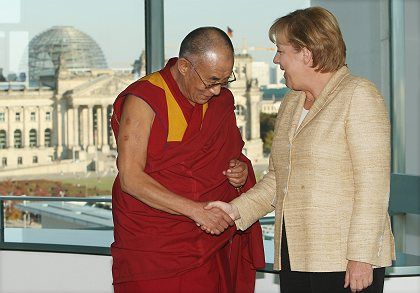 The Chinese government has canceled human rights talks with Germany in protest over a recent meeting between German Chancellor Angela Merkel and the Dalai Lama, SPIEGEL has learned.

Last Thursday, the Chinese leadership called off the annual human rights dialogue between Germany and China, which was scheduled to take place in Beijing in December, in a show of its fury over Merkel's meeting in September with the exiled Tibetan leader.

Officials in Beijing told SPIEGEL that the Dalai Lama meeting would have "long-lasting effects" on German-Chinese relations, and that the basis for trust between the two countries had been destroyed. By meeting the Dalai Lama, Merkel had crossed a "red line," Chinese sources said, adding that the German government must now "take steps" to repair the damage.

Diplomatic sources in Beijing said that Chinese leaders were especially irritated that Merkel had failed to announce her planned meeting with the Dalai Lama when she visited China in August.

The German Foreign Ministry confirmed the cancellation to the Associated Press on Sunday but declined to specify why the meeting had been called off. Chinese Foreign Ministry spokeswoman Jiang Yu recently told reporters that the meeting "hurts the feelings of the Chinese people and seriously undermines China-Germany relations."

On Monday, Germany's Commissioner for Human Rights Policy Günter Nooke told the broadcaster Deutschlandfunk that he hoped to set a new date, possibly in early 2008, for the annual human rights dialogue between Beijing and Berlin. He said Merkel had not met with the Dalai Lama "in order to irritate China," but added that the chancellor couldn't take orders from other governments on who or who not to meet.

China regularly complains about the Dalai Lama's trips abroad. The Tibetan leader and Nobel Peace Prize laureate has lived in exile in India since 1959, after a failed uprising by Tibetans against Chinese rule. China claims Tibet as its territory, and considers any meeting between world leaders and the Dalai Lama as interference in China's domestic affairs.

The Dalai Lama has recently traveled to Australia and Spain as well as Germany. He is scheduled to receive a Congressional Gold Medal in the United States on Wednesday. Beijing has lodged a complaint with Washington, but President George W. Bush still plans to attend the ceremony.