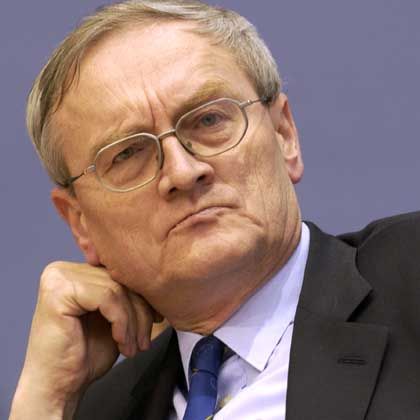 Germany faced an elevated threat of terrorism on Friday because of its involvement in Afghanistan, according to officials who say the risk of an attack here is as high as it has ever been since September 11, 2001. "We are alarmed," the normally mild-mannered August Hanning, Deputy Secretary at the Federal Ministry of the Interior, told reporters on Thursday evening.

Hanning said the level of so-called "chatter" from intelligence sources reminded him of the weeks just before September 11. German as well as foreign intelligence agencies have received hints about plans, groups, and individual extremists who may be planning an attack in Germany.

"We have moved fully into the target range of Islamist terror," said Hanning, who used to lead Germany's intelligence service, the BND.

One source of concern for the government is a video that surfaced on the Afghan-Pakistani border on June 9. The video -- which has since been broadcast on ABC News in the United States -- shows the brother of a recently killed Taliban commander, Mullah Dadullah, in front of a group of his hooded followers, who crouch on the ground. What bothers German authorities about this clip is that four groups of these men -- supposedly suicide bombers -- leave Mansour Dadullah's presence to mount attacks in four separate countries: Germany, Canada, the United States, and Great Britain. The supposed reason is revenge for the NATO-led peacekeeping mission in Afghanistan.

Supporting suspicion raised by this video -- which may just be propaganda -- is US intelligence arising from surveillance of known German extremists. Based on US information, the German Interior Ministry believes at least 10 Islamist radicals with roots in Germany are currently in Pakistani training camps.

On June 10, in fact, two Germans and one Kirghiz man were arrested along the Afghan-Pakistani border on terrorism charges. Pakistani officials say they were outfitted with satellite phones and radio devices and were either on their way to or from a training camp. A German TV broadcaster, N24, reported that they were planning suicide attacks in Germany.

Border security measures have been tightened as a result of the new intelligence, according to German officials.