A German police trade union called on Tuesday for the army to help protect the population from terrorist attacks. Klaus Jansen, the chairman of the Federation of German Criminal Police Officers (BDK), said the police didn't have enough personnel to maintain their current heightened levels of deployment following last week's terror warning by Thomas de Maizière, the German interior minister.

"We must assume that the police state of emergency caused by the acute terrorist threat will last until well into next year," BDK chairman Klaus Jansen told the Neue Osnabrücker Zeitung newspaper. He recommended using the army's military police because of their police training.

The German constitution, mindful of the abuses of state power during the Nazi era, attaches strict conditions to the deployment of troops inside Germany. It stipulates that the police is in charge of providing domestic security and that the army may only be used on German soil to respond to a "grave accident or a natural disaster."

Chancellor Angela Merkel's conservative Christian Democratic Union party has repeatedly argued that the constitution should be amended to allow the pre-emptive use of the armed forces in Germany to avert terrorist attacks, but it has failed to win the necessary backing of other parties.

Jansen suggested that the tens of thousands of soldiers that will be made redundant as a result of planned army cutbacks should be retrained as police officers.

Germany has beefed up police patrols of airports, major train stations and public places since de Maizière warned last week that Islamic terrorists were believed to be planning a terrorist attack in Germany at the end of November.

On Monday, the dome of the Reichstag parliament building in Berlin, a popular tourist attraction, was closed until further notice. A report in the latest edition of SPIEGEL, published on Sunday, said terrorists may be planning an attack on the Reichstag. There are also increased checks and patrols at the Christmas markets, many of which have opened this week, following speculation that they could become targets for terrorist attacks. 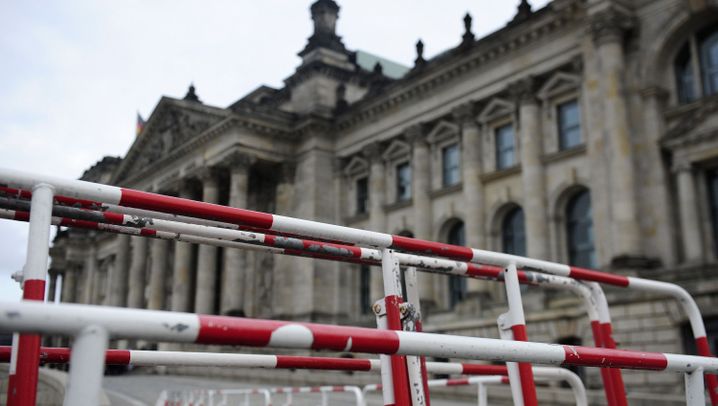 The alert has revived a public debate about tougher security measures and is causing a rift within Merkel's center-right coalition of conservatives and the pro-business Free Democratic Party (FDP).

The FDP, which regards itself as a defender of civil liberties, is strictly opposed to CDU calls for a reintroduction of legislation to permit the mass storage of telephone and Internet communication data. The Federal Constitutional Court ruled in March that a law introduced in 2008 requiring phone companies to store phone, mobile and e-mail communications for up to half a year was flawed and that stored data must be deleted. The CDU wants to reintroduce the law in an amended form.

"The police needs more officers, not more laws," Max Stadler, a senior official in the Justice Ministry and a member of the FDP, told the Stuttgarter Nachrichten newspaper. Data storage represented "a major infringement of civil rights" and would not help fight terrorism, said Stadler, adding that existing laws were sufficient. "Whenever a person is under suspicion, existing law already allows telecommunications surveillance and data storage," he said.

Meanwhile, media reports said Germany was planning to beef up both its foreign intelligence service, the Bundesnachrichtendienst (BND), and the domestic intelligence agency, known as the Federal Office for the Protection of the Constitution. Representatives of the coalition parties had agreed on an increase in staff for the two agencies, senior FDP politician Christian Ahrendt told the Neue Osnabrücker Zeitung. The additional staff would come from the military intelligence service MAD, which Ahrendt said is due to be dissolved as a result of upcoming army cutbacks.

Separately, Die Welt reported that de Maizière was planning to reorganize the federal police forces in response to the heightened terrorism threat. The newspaper said de Maizière planned to submit proposals in December that included a possible merger of the Federal Criminal Police Office (BKA), Germany's version of the FBI, with the Federal Police Force -- which is in charge of counter-terrorism operations and guarding borders, government buildings, airports and railway stations -- and with parts of the customs service. 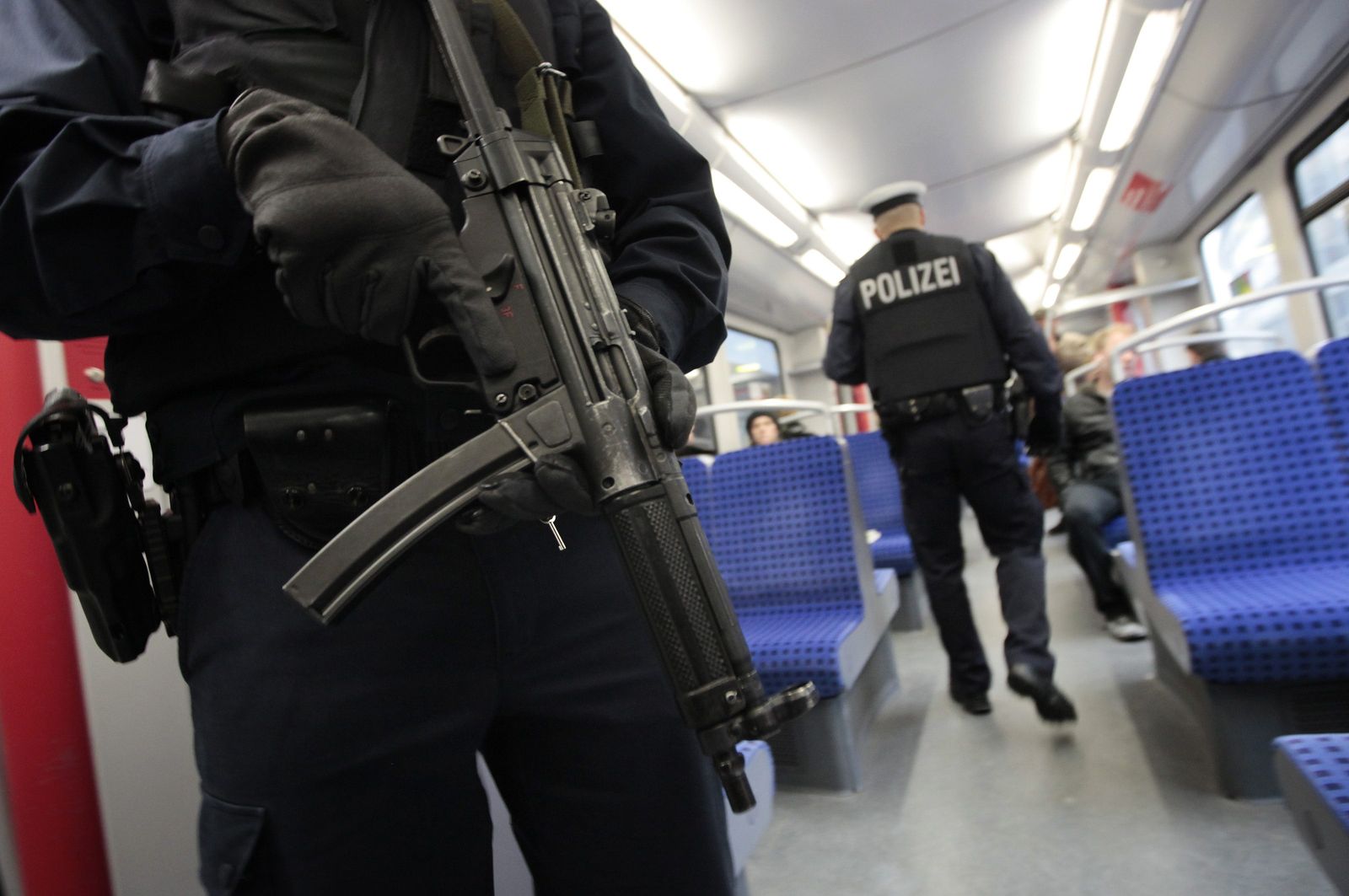 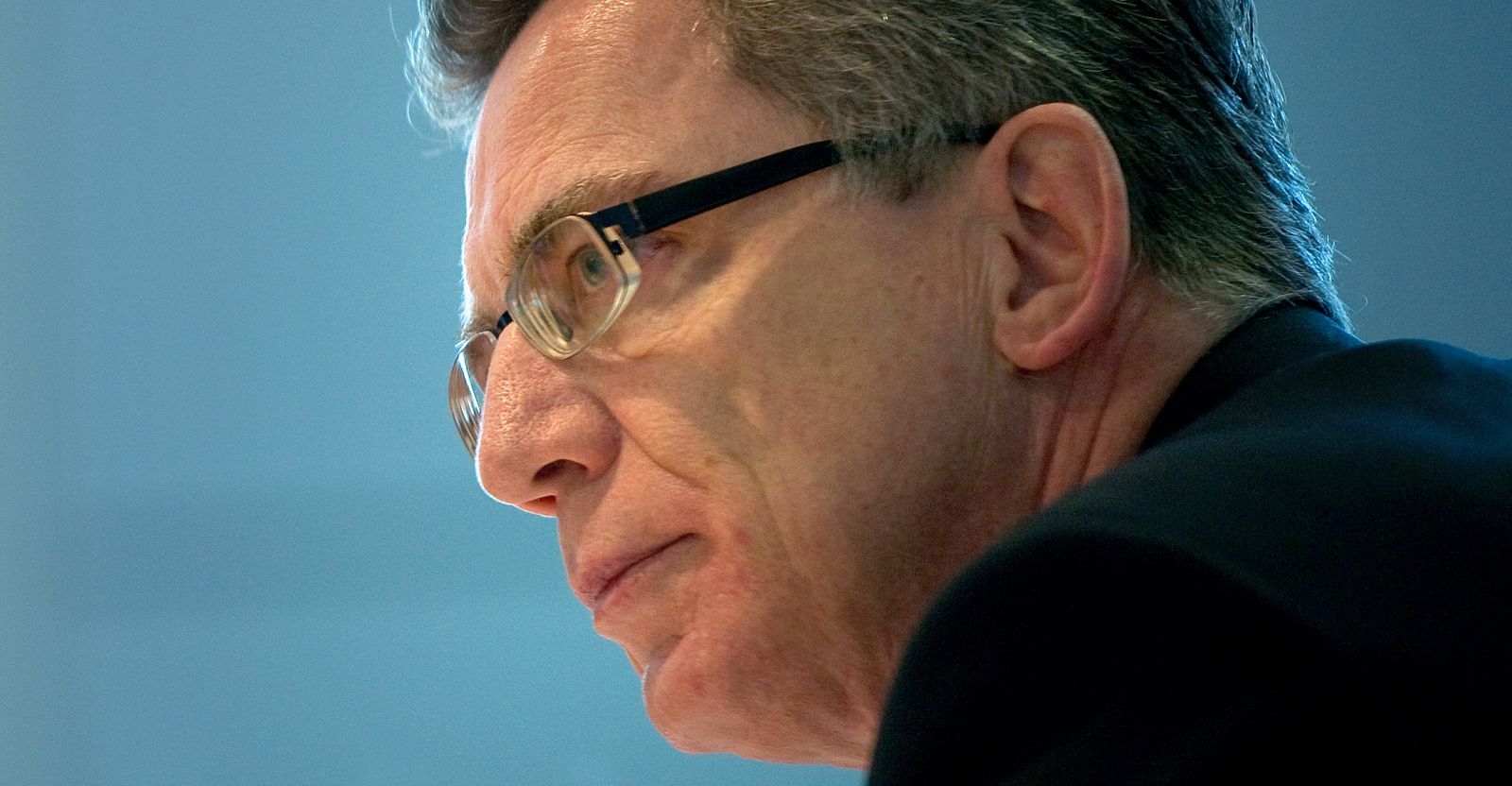 The warning, along with other information, prompted German Interior Minister Thomas de Maizière, who is generally reserved about issuing such warnings, to announce the threat in a televised speech. As a result, security measures have been increased across the country.

The Reichstag is surrounded with barricades, police armed with submachine guns are patrolling major railway stations and airports, and vacations have been cancelled for many security officials in light of the recent threats. Here, police monitor a commuter train in Hamburg.

Or Berlin's Brandenburger Gate landmark, located just a stone's throw away from the Reichstag. 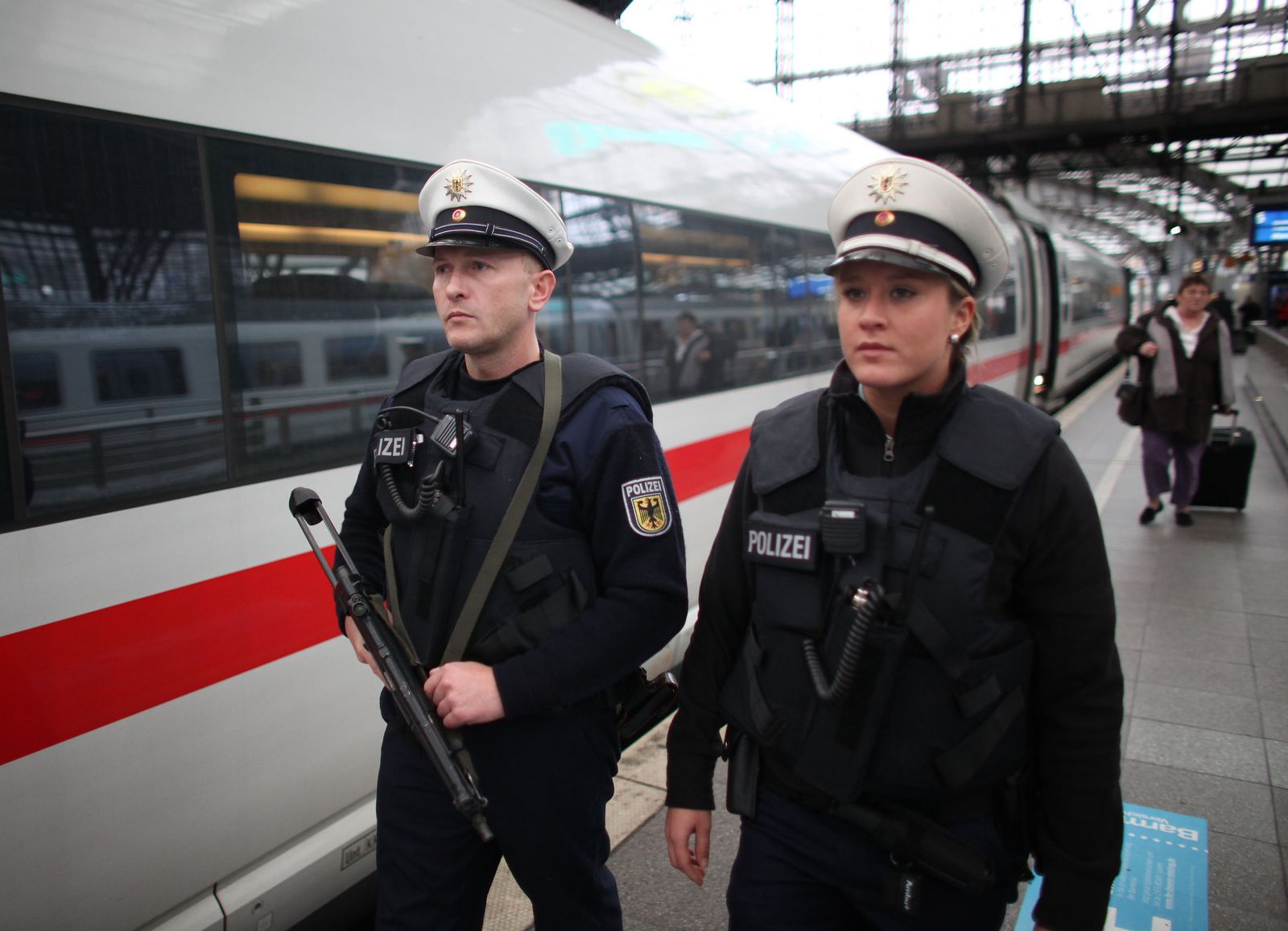 The Cologne station is a vital hub for rail passenger traffic to Paris, Amsterdam and the Frankfurt international airport. 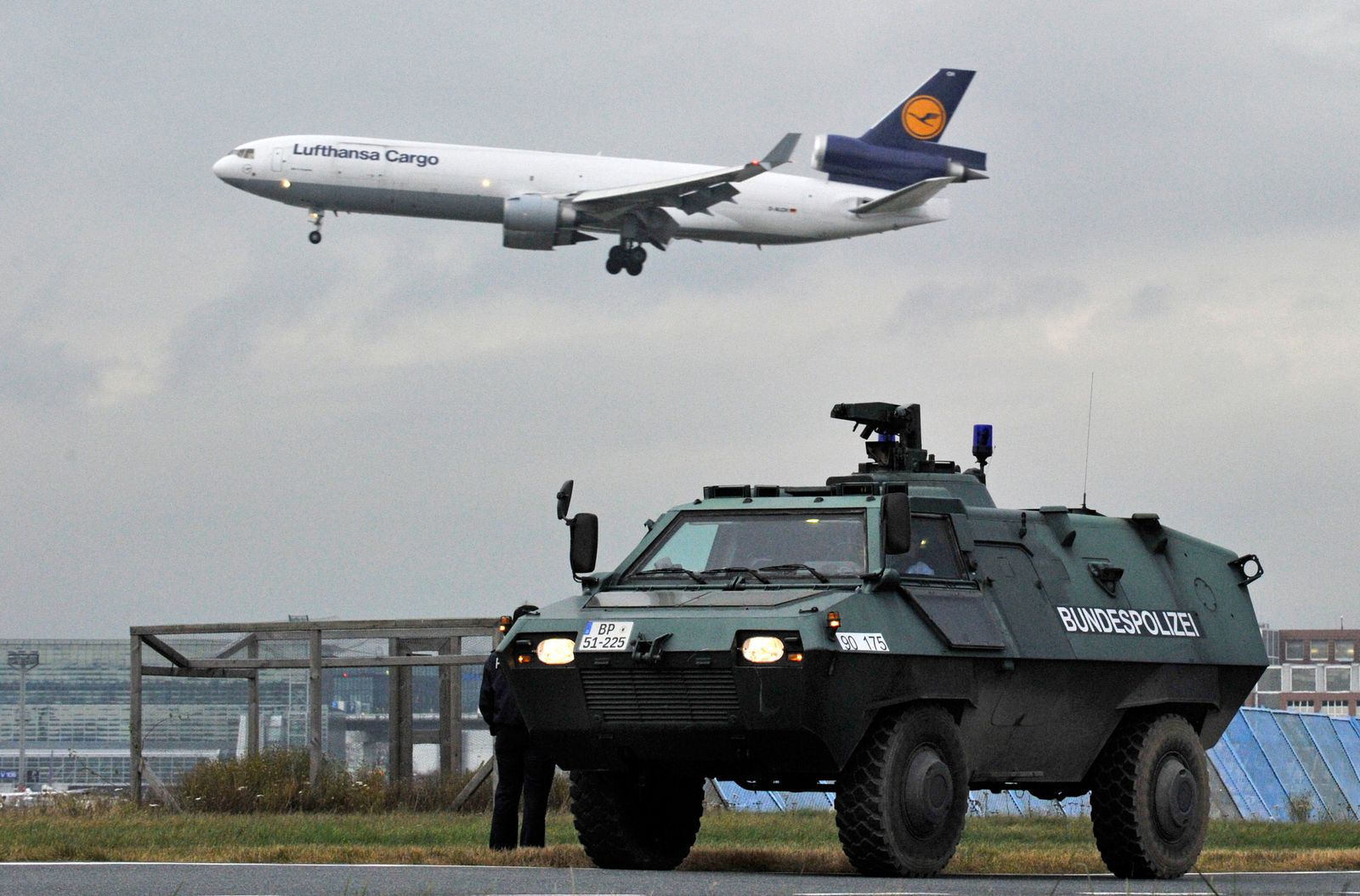 There, security measures have also been intensified. Here, an armoured police vehicle can be seen patrolling the airport, Germany's biggest and one of Europe's busiest.