For months, it looked like Germany might have put a stop to its shrinking birth rate. Indeed, in 2007, the country actually managed a bit of population growth. And, with a fast graying population that will be knocking on the door of the local pension office in the next few decades, it was high time, too. 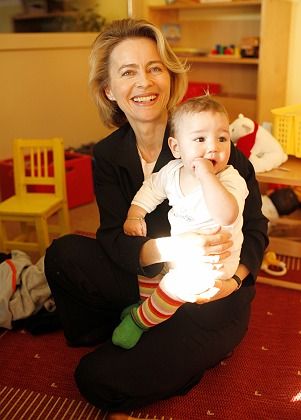 Ursula von der Leyen: Was the German family minister premature in heralding the success of her policies?

But a reversal of Germany's demographic fortunes has proven to be a mirage. In October 2008, the number of births in Germany suddenly dropped. According to preliminary numbers released by the German Federal Statistical Office on Wednesday, in absolute terms, the figures dropped by 11.9 percent over the same period in 2007. For November, the drop was 11.7 percent. December figures haven't been released yet, but in order to make up for the drop in the two previous months, the number Christmas season babies would have to be 20 percent higher than a year previous.

Preliminary figures won't be released until April and final numbers in July, but for the months of January to November, a drop of 1.7 percent in the number of births over the previous year is expected.

At the release of her "Family Report 2009" in February, German Family Minister Ursula von der Leyen heralded a rise in births for 2008 and attributed that success to her own family policies introduced in January 2007 aimed at encouraging both parents to take time off from work to have children.

Under the new benefit, introduced in January 2007, the state pays the parent who stays home with the child 67 percent of that parent's current net income, up to a maximum of €1,800 ($2,810) a month for up to 12 months. If both parents elect to take time off, the total number of months the benefit is paid, split between both parents, goes up to 14 -- a measure intended to encourage fathers to take time off work. Parents seem to be taking advantage of it, too. Figures released in February suggest that some 15 percent of fathers are taking at least two months off work under the scheme.

Von der Leyen's report, however, was based on data for 2008 through September, before fears of the global economic downturn had gripped Germany. On Wednesday, her ministry spokesman said he would not comment on preliminary data.

Germany's Kölner Stadt-Anzeiger newspaper is calling it "Von der Leyen's premature birth." And editorial in the Süddeutsche Zeitung is titled "the minister's statistical tricks" and notes that von der Leyen has been skillful at interpreting numbers aggressively and spinning them into positive publicity. "Of course, now she has to endure critical views when the world turns out to be less rosy than promised.... Now she'll have to live with the fact that her policies will be assessed as a disappointment."

The real test for van der Leyen will be the extent to which the drop in births affects the country's birthrate. In 2007, the Statistical Office placed that rate at 1.37 children per woman, a slight increase over the previous year. The official birthrate for 2008 won't be released until this summer.