The hoopoe is an impressive-looking bird with its long beak, red plumage, black-and-white striped wings and tail, and exotic crown. "If you come along with me, you're pretty sure to spot a hoopoe," says Engelbert Mayer of the Kaiserstuhl wildlife conservation association in south-western Germany. He has been organizing excursions to see the rare bird for years.

The migrant hoopoe is currently heading south and will be back next March. The male returns to the breeding place he chose the previous autumn. He'll sit there and call until a female flutters by to mate. They breed in holes in tree trunks or in small sheds.

The Kaiserstuhl, a range of low mountains, has had a conservation program for the hoopoe for the last 23 years, and its population has grown from a handful of pairs to more than 100 as a result. Mayer and his colleagues have put up breeding boxes, which is why the ornithologist knows the best places for observing the attractive birds.

"The special thing about the hoopoe is his looks," says Mayer, "especially when he spreads his fan." It takes a lot of concentration to witness the spectacle. When the hoopoe approaches the nest or flies out of it, it always briefly sits down somewhere nearby. That's the moment. Only when it sits down does it spread its fan. When it's sitting, it folds its feathers back down.

Just Passing Through -- Cranes Near Berlin

With its long legs, black-and-white feathers and red crown, the crane is an elegant species. In the 1970s it was almost extinct in Germany with fewer than 600 pairs. But the number of cranes has grown tenfold since then.

In autumn, the cranes leave Germany, Scandinavia and eastern Europe to head for sunnier climes. The birds are among the few beneficiaries of global warming. Because the winters in Europe are getting milder, many of them no longer bother to make the dangerous journey all the way to Africa, and spend the winter in Germany instead.

"The autumn is the best time to watch cranes," says Henrik Watzke, a wildlife expert from Linum near Berlin. "We get up to 80,000 birds in a single day here." The area around Linum is one of the biggest inland resting areas for cranes in central Europe. Watzke runs a group that provides regular crane tours from Sept. 24 until Nov. 13.

During the day, the birds stand in the harvested fields, eating, resting and cleaning themselves in preparation for their long journey south. They sleep at night in the shallow waters. "The evening mass takeoff to the sleeping areas is a fantastic spectacle," says Watzke. "Tens of thousands of cranes crowd the sky and emit ther typical trumpet-like calls. It's an incredible atmosphere."

Beaver meat is tasty and their fur is warm -- two reasons why the beaver almost became extinct in Germany by the end of the 19th century. Conservation projects and targeted repopulation have increased their numbers since then, and there are many places where they can be observed, such as the "Dübener Heide" nature park near Leipzig in the eastern state of Saxony, or the "Feldberger Seenlandschaft" park in Mecklenburg-Western Pomerania.

The observer can hide in a small wooden shed with viewing cutouts, and with a bit of luck watch beavers at work. In the Spessart mountain range in southwestern Germany, groups run beaver excursions to inspect signs of activity such as gnawed trees and dams. An impressive beaver colony can be seen on Lake Chiemsee in Bavaria. "The lodge is five meters long and three meters high," says Heinz-Jürgen Pohl, the local beaver expert. Up to six beavers live together here. "You can see into the lodge, especially in the winter when there are no reeds or leaves on the trees. There's a 50-50 chance of spotting a beaver," says Pohl, who offers guided tours.

The northern German state of Schleswig-Holstein is home to 15 different types of bats. They spend the winter under bridge arches or in the caves of Kalkberg mountain near the town of Bad Segeberg. The Kalkberg is the largest known winter habitat for bats in central Europe. Even the very rare Bechstein's bat and Brandt's bat can be found here, along with the Greater mouse-eared bat, Germany's biggest species of bat, which is threatened with extinction in Schleswig-Holstein.

It is possible to inspect the Kalkberg Cave up until Sept. 30, before the winter season starts. During that time only a few bats are there, mostly young ones checking out their winter quarters before they move in during October. But to preserve their habitat the cave is closed to visitors during the winter months. There are also bat-spotting excursions elsewhere in the region until the end of September.

Things get really spectacular again in the spring, when the bats awake from their hibernation and leave the cave. In the dusk, thousands can be seen fluttering out into the night sky.

Cute Seals in the North Sea

Everyones has seen photos of impossibly cute seal pups with their thick white fur and big, black eyes. The two indigenous species of seal, the grey seal and harbor seal, were once almost extinct in Germany. Fishing deprived them of food and many seals were killed because they were seen as a threat to the industry. There was even a time when premiums were paid for dead seals.

But the grey seal and harbor seal are now protected species and and their numbers are growing again in the North Sea. The grey seal, weighing up to 300 kilos and twice as big as the harbor seal, is Germany's largest predator. The island of Helgoland in the North Sea is a favored place for seal-watching. The animals lie on the nearby island of Düne, close to restaurants and beaches.

The Jordsand conservation group organizes regular trips to see the seals. "Up to 200 seals lie on Düne during the breeding season," says Ulrich Kieschnick, a local guide. The highlights of the year are in May and June when the harbor seal cubs are born, and in December and January, when the grey seal cubs are born. The little white cubs spend four weeks on the beach and are suckled by their mothers before they learn to swim in the sea.

"The harbour seals are pretty quiet but the grey seals are always noisy," says Kieschnick. Grey seals communicate through grunts in various pitches. "If you keep quiet and avoid hectic movements you can get as close as 30 meters to the seals."

Wolves Make a Comeback in Saxony

Wolves roamed the whole of Europe for centuries. But intense hunting by livestock owners protecting their animals made wolves virtually extinct in western and central Europe by the end of the 19th century. It wasn't until the 1990s that wolves were sighted in Germany again. They had wandered in from Poland. In 2000, the first wolf cubs were born in the Lausitz region of Saxony, which now has its own wolf museum and organizes regular tours.

"Unfortunately you don't get to see wolves on the excursions," says Helene Möslinger of the Wolfsregion Lausitz office. But the trips offer interesting insights. "Visitors follow the tracks and the droppings and learn a lot about the wolf, his expulsion and return to the region."

Wildcats in the West

If you walk through the woods and spot a cat, it could be a normal domestic feline -- but it could also be a wildcat. The greyish-brown animals are a little larger and more powerfully built than their domesticated relations and have a bushy tail with black rings. Wildcats are very shy, even if they have been hand-reared.

In Germany, wildcats live in central and southwest regions, such as the state of Rhineland-Palatinate. The region's wildlife conservation agency has published a brochure with local hiking trails through areas populated with wildcats. But as the the animals are rare and shy, direct encounters are very unlikely. In the spring, however, hikers sometimes spot kittens playing on the path. The mother is probably away hunting and will return soon, so the kittens must under no circumstances be disturbed.

Like wolves and wildcats, the lynx is a very shy animal and it takes a lot of luck to spot one in the wild. "I have worked and lived in the national park for 36 years and I've only seen a wild lynx once," says Rainer Pöhlmann of the Bayerischer Wald national park. The last wild lynx in the Bayerische Wald forest region was shot in the mid-19th century, and the species didn't return until the latter half of the 20th century.

But it is nevertheless possible to see lynx in the park because several are kept in an open-air enclosure. "Visitors can hike through our nature park and then take a look at the animals in the enclosure," says Pöhlmann. Between four and six adult lynx can be seen roaming around the spacious 14,000-square-meter fenced-off area. "Lynx are loners and avoid each other. With enclosures that big, it works quite well," says Pöhlmann. But in the wild, their territories ae much bigger, in some cases bigger than the entire 240-square-kilometre nature park, he added.

Otters and Badgers in Lower Saxony

In the Gut Sunder park in the northern state of Lower Saxony, wildlife experts have found a special way to permit the observation of rare animals. Visitors who don't spot one while hiking around the park can go to an animal film center which has livestream camera transmissions from 10 locations that are inaccessible to visitors. The cameras film animals such as otters, badgers, kingfishers and pine martens. And if the animals happen to be out of view of the cameras, highlights can be sampled in the film archives.

Kingfishers All Over Germany

You don't always have to go on a guided tour to see rare animals in Germany. You just need to be alert and lucky. You might see a flash of turquoise diving into the water -- it's likely a kingfisher. The red-breasted bird with a shiny blue back is indigenous all over Germany. But it is choosy about where it lives. Only natural flowing streams and rivers will do. That's because kingfishers dig holes in the steep slopes of brooks and rivers to bring up their young. The slopes must be at least a meter high so that the offspring is protected from floods. Kingfishers breed up to three times per year. While one parent, usually the father, looks after the older chicks, the female cares for the youngest offspring.

So if you're walking along a stream or a river that weaves its way through the countryside, there's a chance you'll spot a kingfisher, maybe sitting on a branch jutting out over the water, waiting for food. If you're lucky, you can even witness a scene like this: as soon as a little fish comes close to the surface of the water, the kingfisher dives into the water, returns to his branch with the fish in his beak, knocks the hapless fish against the branch once or twice and devours it, head first. 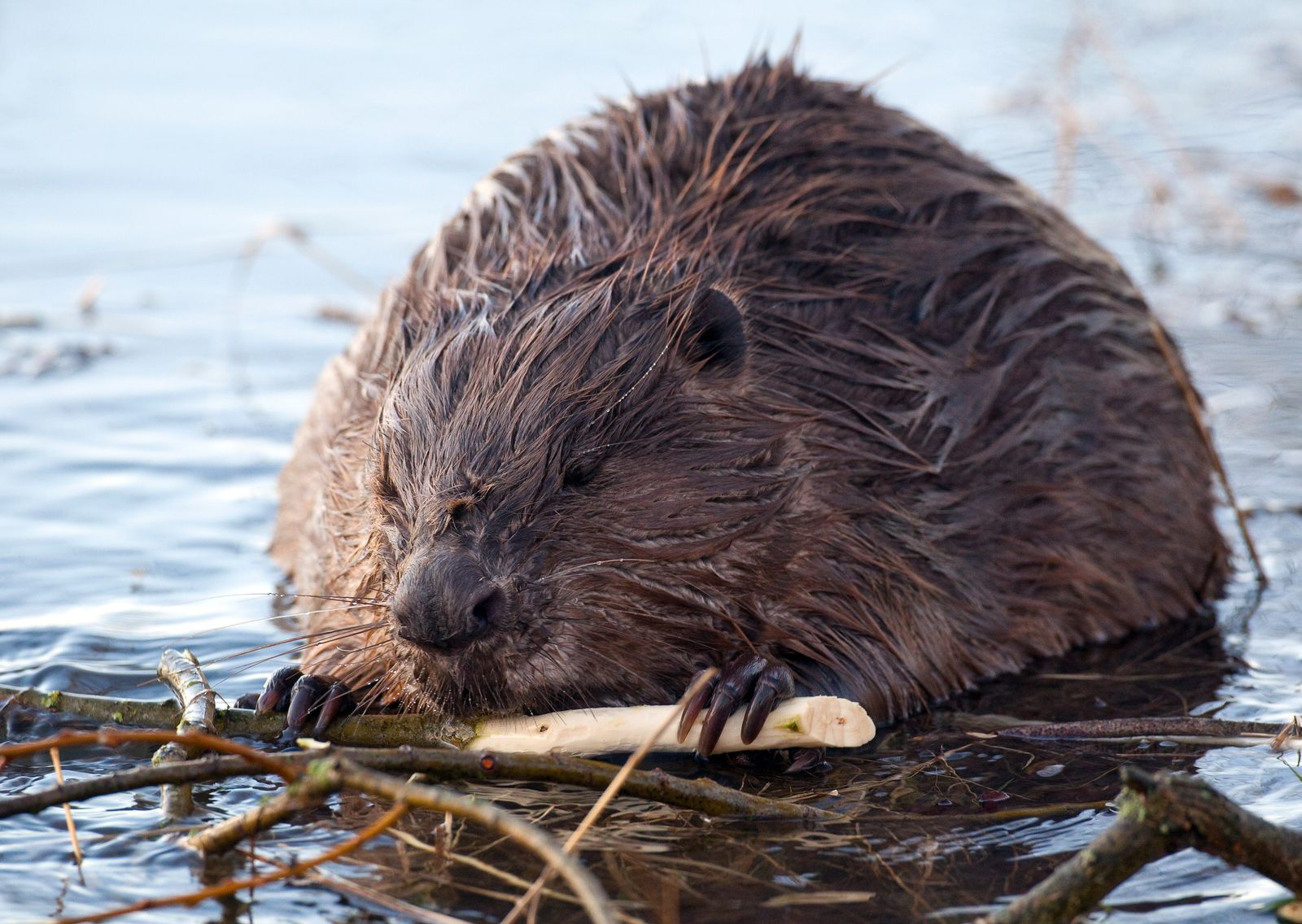 Beavers were almost extinct in Germany a century ago. Now they're back. 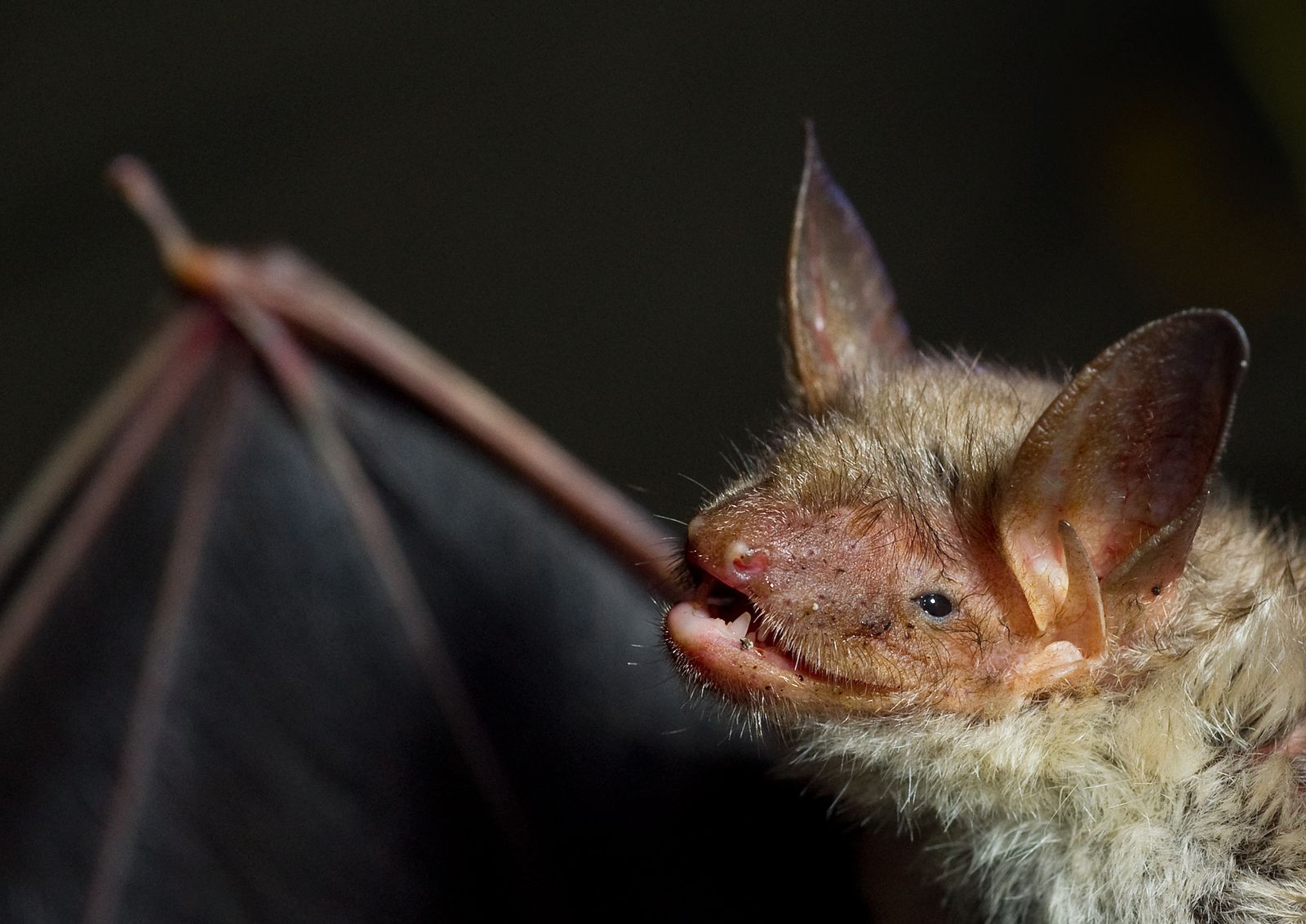 The great mouse-eared bat, one of various species of bats that hibernate in caves in Germany.