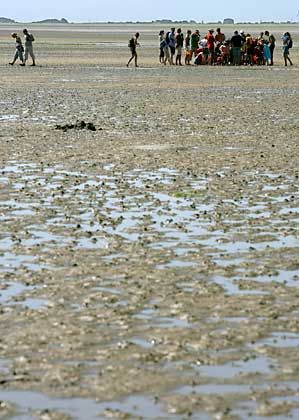 Nature fans exploring the Wattenmeer, one of Europe's richest biospheres. The coastal tidal flats face the North Sea -- and underneath them may be black gold.

Werner Schuhbauer's talents are in strong demand these days. Few other employees of RWE Dea, a German oil and gas exploration and production company, have his talent for playing the role of the bad guy.

Whenever a puddle of oil is found on a North Sea beach, Schuhbauer swings into action. His company is pumping oil from the bottom of the North Sea, and when there is any hint of a possible oil spill, all fingers point directly at RWE Dea.

When that happens, Schuhbauer, 60, knows exactly how to respond. An engineer with a degree in chemistry, he has spent years practicing the fine art of dealing with environmentalists: He keeps a respectful tone when discussing their concerns, cites guidelines that sound sufficiently positive and hands out friendly reminders of his company's strong environmental track record.

Schuhbauer's job is to convince conservationists, citizens and officials from environmental agencies of his company's noble intentions. For a man in his position, it's always reassuring to discover that the black sludge that periodically turns up on beaches in the area isn't coming from the local RWE drilling platform but rather from some dilapidated, leaky oil tanker.

But this time Schuhbauer isn't dealing with one of the usual oil dreck incidents on the beach. In recent weeks, the news became public that German energy giant RWE has plans to drill six new test wells deep into the bedrock off the German North Sea coast, five off the state of Schleswig-Holstein and one near the beaches of Lower Saxony. The technicians involved in the exploratory drilling -- to be conducted from existing platforms -- hope that the drill water being brought to the surface will contain initial traces of the black gold they believe lies in the bedrock.

Schuhbauer's problem? The Wattenmeer, a unique tidal flat biome, is a national park, which places it firmly under the protection of the toughest conservation laws in the Western world. It's no surprise that Greenpeace floated a protest buoy off the coast soon after RWE's plans became public.

"A drilling platform on the tidal flats," says Hans-Ulrich Rösner of the World Wildlife Fund (WWF), "is tantamount to putting a french fry stand inside the Cologne Cathedral." Rösner's analogy is no coincidence. The Cologne edifice is a UNESCO World Heritage Site, and if the governments of Germany and the Netherlands have their way, the Wattenmeer will soon be named a UNESCO biosphere reserve. If the petition is approved, the Wattenmeer coastal wetlands region will join the ranks of existing biosphere reserves like the Grand Canyon and the Galapagos Islands. 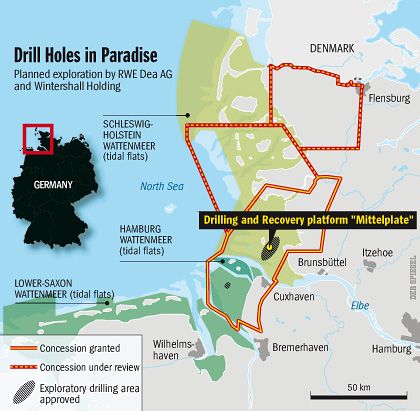 The Wattenmeer deserves the UNESCO pedigree -- or at least that was Chancellor Angela Merkel's opinion when she was still the Germany's environment minister and launched the application process back in the 1990s. The glittering expanse of North Sea coast is an unparalleled ecological treasure worldwide. A diverse array of plants and animals uniquely adapted to the rhythmic play of the tides thrive in the region's vast expanses of sand and tidal flats. There are up to 4,000 species in the saltwater wetlands of the North Sea coast, and 250 of them exist nowhere else in the world.

For a species to thrive there, it must be capable of withstanding salt water, flooding and dry periods. Animals that can survive under these conditions are richly rewarded with an abundance of mussels, worms, snails and shrimp. Of all habitats on earth, only the tropical rainforest contains more living biomass than the Wattenmeer.

As a result, there are more birds there than anywhere else in Central Europe. Up to 12 million migratory birds use the Wattenmeer as a resting place, gorging themselves on its abundant food sources in preparation for breeding. Up to 200,000 shelducks converge on the region around the Elbe River estuary each summer. They are protected there when they shed their flight feathers and have to survive for weeks in this vulnerable state.

And it is in this paradise, of all places, that RWE now hopes to prospect for oil?

"We are convinced that drilling for oil and protecting the environment are not mutually exclusive," Schuhbauer insists. He argues that drilling would not pose any danger to the region's flora and fauna.

Because the Wattenmeer is so unique, it irks conservationists to know that drilling has been going on in the region since 1985 -- the year when the Wattenmeer National Park was created. That same year, German authorities issued a permit to a consortium of oil exploration companies to install the Mittelplate drilling platform in the Wattenmeer. It's the only oil platform located in German waters.

WWF's position is that the Mittelplate oil platform is a "deep wound in the Wattenmeer." The platform's operation, the environmental group claims, constantly interferes with the sensitive habitat. "A pipeline was built, power cables laid, dredgers excavate the ocean surface and supply ships disturb national park's birds and fish," the organization writes on its Web site. "WWF is calling for the oil production to be stopped." 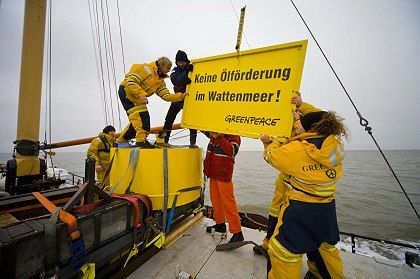 "Stop the oil exploration in the Wattenmeer": Greenpeace and other environmental activists say oil companies have no businesss drilling in national parks.

But the consortium, which consists of RWE and Wintershall, a subsidiary of German chemical giant BASF, produces more than 2 million tons of oil a year from wells as deep as 2,000 to 3,000 meters (6,500 to 9,750 feet). This represents more than half of Germany's total oil production, making the reserves under the Wattenmeer Germany's equivalent of Texas.

"The reserves are roughly the equivalent of the oil we import from Azerbaijan, Saudi Arabia or Nigeria," Schuhbauer proudly points out. "With this operation, we are helping to secure Germany's oil supply."

Still, environmentalist Rösner argues that the amount of oil RWE extracts through its Wattenmeer wells is "so small that we could just as well do without it."

Whether or not the drilling would seriously disturb the region's ecosystem, Rösner has decided not to inflame the public with images of suffering seals and eider ducks. Rösner is against drilling in the park as a matter of principle, insisting that industry must must begin respecting the environment, at least in national parks.

'Imagine the Outcry if Corporations Started Drilling in Yellowstone'

"If we want to take climate protection seriously, we have to start leaving the fossil fuels in the earth somewhere," the environmentalist says. "And where should we begin putting an end to drilling? The best places are rich countries like Germany. And where in those countries? In national parks, of course. Imagine the public outcry if energy corporations would suddenly start drilling in Yellowstone National Park or the Serengeti!"" 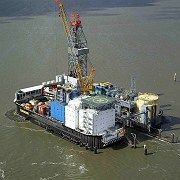 In 2003, Shell agreed to never again exploit natural resources in biosphere reserves. But German companies RWE and Wintershall aren't interested in making similar commitments. They are concerned that the North Sea's accessible oil reserves are running out. Although RWE geologists estimate the entire Mittelplate reserve at 100 million tons, they can only bring up another 30 to 35 million tons using current technology. At some point, their pumps will begin pushing more water and less crude up through the drilling holes. "Currently, our efforts are geared toward maintaining the current production volume," says Schuhbauer.

To address the problem, RWE Dea has already applied for two new concessions with the German Federal Mining Authority. The concessions correspond to two large claims -- both in the Wattenmeer National Park, where the company's exploration teams hope to expand their hunt for oil.

The true temptation for RWE is the high price of oil, which makes expected profits high enough to offset the bad PR that comes with being seen as a defiler of national parks. According to RWE, at a price of $90 a barrel of North Sea Brent crude, it's even worthwhile "skimming off the few puddles of oil on the water surface" that are still bubbling up from an almost empty well near the town of Hankensbüttel in the western German state of Lower Saxony. From RWE's standpoint, test drilling is an indispensable method of scouting for new reserves near the Mittelplate.

Tapping these reserves is mainly a technical problem for RWE's executives. Under both Schleswig-Holstein's national parks law and the trilateral Wattenmeer Plan between Germany, Denmark and the Netherlands, test drilling will only be approved if RWE and Wintershall can demonstrate that they can tap the wells from land or from the existing Mittelplate drilling platform. No one wants to see a new drilling platform erected amid flocks of shelducks.

But critics also question whether the test drilling can even be successful. To satisfy the legal requirements, engineers would have to perform complex diagonal drilling procedures in order to reach the suspected reserves. In Lower Saxony's Wattenmeer, this would mean sending drill bits diagonally downward through 12 to 15 kilometers (seven to nine miles) of rock.

And that would be a first for RWE, at least at the Mittelplate oil platform -- the longest diagonal well in the reserve, and it passes through an easy to drill salt deposit, is only slightly longer than nine kilometers (five miles). "Whether they'll succeed is questionable," says Rösner. 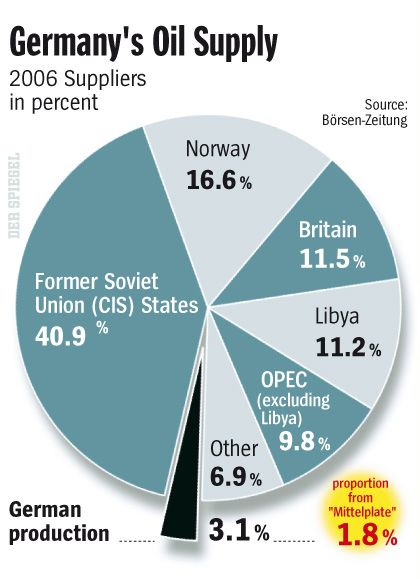 RWE Dea already had to withdraw the first application for permission to begin test drilling it filed with the Schleswig-Holstein national parks department because it was unable to prove that the drilling could in fact be done from the shore or from the existing platform. Meanwhile, the consortium has submitted a new application to the parks department, but it is still unable to prove that it can conduct its proposed test drilling in a way that won't harm the Wattenmeer. "We're working on it," says Schuhbauer.

The timing of the news of the test drilling plans is in no way coincidental. Opponents of the plan to turn the Wattenmeer into a biosphere reserve are attempting to drum up public dissent against the UNESCO listing. The city of Hamburg removed itself from the application at the last minute, fearing, in an election season, that the UNESCO pedigree could interfere with its plans to dredge the Elbe River to make the city's port accessible for a new generation of super-size container ships. RWE's Schuhbauer is also concerned about the possible "restriction, and perhaps even obstruction, of our activities."

German politicians, however, claim efforts to scupper the biosphere listing will fail.

"It's all propaganda," says Christiane Paulus, who is charge of biosphere reserve issues at the Federal Ministry of the Environment. According to Paulus, biosphere reserve status will not affect oil exploration or dredging of the Elbe. That's because the authors of the German biosphere reserve application have already noted all of the factors that could disturb the Wattenmeer in the application dossier. If UNESCO decides to recognize northern Germany's environmental gem, it will do so knowing full well that these projects were already planned, and that they will come to fruition if allowed under local conservation laws.

The comments by the city of Hamburg and by RWE executives can do nothing to change the application to grant biosphere reserve status to the Wattenmeer, which has already been delivered to UNESCO's Paris headquarters. "It's already in the bag," says Paulus, clearly pleased.