Editor's note: Documents released last Thursday by the British Foreign and Commonwealth Office illustrate how Prime Minister Margaret Thatcher, a bitter opponent of German reunification, insisted that her government resist the historic development. The 500-page collection of long-secret letters and memos about the reunification process date to between April 1989 and November 1990. They show that the British government played a far more constructive role in German reunification than had been previously thought. Only Thatcher had serious doubts about the change.

SPIEGEL ONLINE has also posted an interview with former French Foreign Minister Roland Dumas, who discusses Thatcher's resistance as well as the initial misgivings of his own boss, then French President Francois Mitterand.

SPIEGEL: Sir Christopher, how bad was the relationship between Prime Minister Margaret Thatcher and Chancellor Helmut Kohl when the Berlin Wall came down?

Mallaby: Very bad. It was a question of personal chemistry. They didn't naturally enjoy each other's company. Mrs. Thatcher had easier relationships with Reagan or Gorbachev.

SPIEGEL: Kohl's ultimate effort in befriending world leaders was to invite them to his home in provincial Oggersheim for a meal of pig's stomach, a quite questionable treat for many. Did this help at all?

Mallaby: I was not there on that visit, but I don't think it had the effect of making the relationship an easier one.

SPIEGEL: Did this mutual resentment strain the German-British relationship?

Mallaby: No. The two governments found ways to work together, in spite of everything. And Foreign Secretary Douglas Hurd struck up a good relationship with Helmut Kohl. 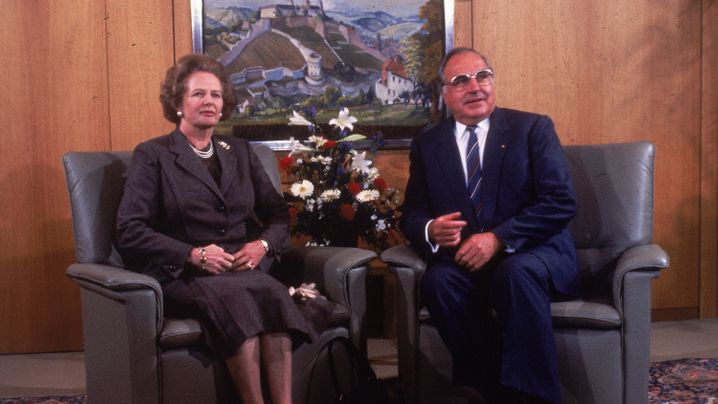 SPIEGEL: Nevertheless, Mrs. Thatcher took a tough stance on the question of German reunification. Did she actually achieve anything with her fierce opposition?

Mallaby: I think she would claim that the creation of the very successful 2+4 Forum (a conference attended by the two Germanys and the four Allied Powers -- the United States, the United Kingdom, France and the Soviet Union) partly resulted from her pressing for more consultation. Her objections at the beginning were mainly about speed and about lack of consultation. Think of Kohl's speech of Nov. 28, 1989, the "10-point" speech: He spoke without consulting the Allied Powers.

SPIEGEL: Mrs. Thatcher complains about you in the documents that were released last week by the Foreign Office. She says with bewilderment: "Christopher Mallaby seems to welcome reunification."

Mallaby: My reporting was a faithful reflection of how things looked from Bonn at that time. I was convinced that a unified Germany would not be a danger again. I told Mrs Thatcher we would not see a mixed model of East and West Germany. We would see the West German system extended over East Germany. To me, West Germany was the most successful state in German history and the most successful state in Europe after 1945. But there was not much agreement in this regard between the Foreign Office and No. 10 Downing Street.