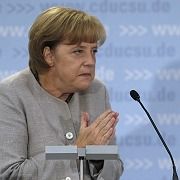 German Chancellor Angela Merkel: "That cannot be allowed in the international sphere."

The United States government is campaigning around the world for support for its multibillion-dollar Wall Street rescue package. The reaction has been skeptical at best -- and in Europe the plan has been met with bareknuckled criticism.

German Chancellor Angela Merkel has accused the US government of serious failures which she believes contributed to the current credit crisis. In particular she blamed Washington for resisting stricter regulation.

On Monday she also said the crisis could hurt the German economy. "The whole thing is going to set the pace for the economy in the coming months and perhaps years," Merkel said at a meeting of her party, the conservative Christian Democrats.

Over the weekend the US said it would provide $700 billion to cover bad debt on Wall Street and ensure the survival of some financial institutions. On Sunday US Treasury Secretary Henry Paulson then called on foreign governments to launch similar bailouts for their own banks. "We are talking very aggressively with other countries around the world and encouraging them to do similar things and I believe a number of them will," Paulson told ABC News.

But the governments of Germany and Great Britain have shaken their heads.

While her finance minister said German banks would not need a similar bailout, Merkel said the world community should react by forging international agreements that could be voluntary rather than anchored in law. "The crisis on the international financial markets shows us that you can do some things on the national level, but the overwhelming majority must be agreed to on the international level." Instead of codifying these deals in law, Merkel suggested binding agreements between major economic players. "This is about greater transparency," she said.

A day earlier, during a visit to Austria, the German chancellor had even firmer words. "I'm criticizing the self-image of the financial markets -- which have unfortunately resisted voluntary rules for too long with the support of the governments of Great Britain and the United States."

'This Cannot Be Allowed'

At a political rally in Linz, Merkel indirectly attacked US President George W. Bush. She suggested that American obstinacy had dragged other industrial nations into the credit crisis. Many European countries, she said, had already imposed stringent conditions on their banking sectors. "We dutifully adopted a nice EU directive into national law, and we had to deal with numerous complaints from small- and medium-sized companies in doing so. When the day came, the Americans said, 'We won't'," Merkel said. "That cannot be allowed in the international sphere." Merkel complained that taxpayers would be forced to foot the bill in countries far beyond the US and Britain.

She was referring to the "Basel II" agreement, a set of international standards which tightened capital requirements for credit institutions. Much of the EU has signed up to Basel II, and Germany codified it in 2007. But Washington still hasn't set a date for working its principles into American law.

Europe, she said, "must now push to get greater transparency on the financial markets and to get clearer regulations so that a crisis like the current one cannot be repeated."

German Finance Minister Peer Steinbrück of the left-leaning Social Democrats is also calling for tighter rules. In an interview with German television he said he wouldn't rule out the idea of an international authority to hammer out regulations -- as opposed to the international agreements favored by his boss, Chancellor Merkel.

The European Commission in Brussels said it would announce its own plan for improved financial market regulation. EU Internal Market Commissioner Charlie McCreevy is planning to consider the first measure on Wednesday, according to a report in the Financial Times Deutschland. On the agenda is a proposal that would require banks to disclose whether they are retaining a stake in loans they sell to other banks.

The requirement could serve as an incentive for banks to pay closer attention to the quality of the credit risks they pass on to others.

But Finance Minister Steinbrück said Monday there was no need for Germany to fall in line with the Americans in bailing out its banks. After a telephone consultation with the finance ministers and heads of the central banks of the G-7 states, he said no other member planned to follow the US example. He described Washington's program as "remarkable," but said the situation wasn't as grave in the other six G-7 countries as in the US.

The German government has officially greeted the US program, saying Washington "takes its special responsibility seriously" in the crisis unleashed by the American subprime mortgage problem. A government spokesman said the measures would help to defuse the crisis.

Others were less certain.

"I have doubts about whether this is the smartest way to deal with the issue," Michael Meister, the deputy head floor whip of Merkel's Christian Democrats (CDU) told Handelsblatt, a business daily. Meister said the US could be laying a foundation for the next crisis with its multibillion dollar bailout -- mirroring the decision after the Sept. 11, 2001, terrorist attacks to massively lower interest rates, a move which he said triggered the current turbulence on the financial markets.

Joachim Poss, deputy parliamentary whip for the center-left Social Democrats, also rejected calls from Washington to participate in the bailout. "The Americans can't make Germany liable for their own failure and arrogance. A similar action is neither planned nor necessary in Germany," he said. However, he wouldn't comment on whether he thought the US bailout was necessary. "That's an issue for the Americans," he said.

In Britain, Prime Minister Gordon Brown told the BBC: "People were taking risks that were excessive -- and that was mainly in my view in America and we are paying a price for what has come out of America."

"We're not working toward implementing a US-style resolution regime, said a spokesman for Chancellor of the Exchequer Alistair Darling, Britain's finance minister. "But the prime minister and the chancellor have made clear that we will take whatever action is necessary in the interest of financial stability."

As a result of the crisis, European countries including Germany, Britain and the Netherlands have announced temporary bans on short sales, which many experts say helped bring Wall Street's powerful investment banks to their knees.

The global financial crisis could also have a stronger and lengthier impact on the German economy than previously believed. According to information obtained by SPIEGEL, the German government plans to reduce its forecast for economic growth in 2009 from 1.2 percent to 0.5 percent.