It isn't often that German Chancellor Angela Merkel shows her displeasure at something. One of the chancellor's strengths is that she is able to keep her emotions in check, which explains why her fellow party members were so surprised when the subject of Germany's Federal Constitutional Court was raised in a meeting of the executive committee of her center-right Christian Democratic Union (CDU) two weeks ago.

The judges had just admonished Merkel for disregarding the rights of the parliament during efforts to rescue the euro. It was already the second ruling in this vein this year. Criticism of Germany's highest court is generally viewed as inappropriate in political circles, but this time the chancellor had had enough.

How, she asked, could she pursue reasonable policies if she had to reveal her negotiating tactics before every meeting with a European leader? "This takes me to my limit," Merkel complained, to a murmur of approval from her fellow CDU members. They quickly realized that the chancellor views the judges as unrealistic law professors with no understanding whatsoever of the challenges of everyday politics.

Keeping the Government in Check

Things have never been easy between Berlin and the Karlsruhe-based court. The Federal Constitutional Court was set up in 1951 to ensure that the state's institutions complied with the constitution of the newly founded Federal Republic of Germany. Since then, government politicians have often viewed the court as a gadfly that can declare laws invalid with the stroke of a pen. A sentence attributed to the late Social Democratic Party politician Herbert Wehner has become legendary: "We won't allow the assholes in Karlsruhe to destroy our policies."

It's in the nature of things that there is occasionally disagreement between the court and the political world. The court's job is to ensure that the government sticks to the guidelines laid down in the German constitution. Politicians, on the other hand, don't appreciate it when the court portrays them as underhanded rogues who bend the constitution to conform to their backroom deals. It also doesn't help matters that the court's judges generally enjoy a level of popularity that many politicians can only dream of.

Since the eruption of the euro crisis, however, there has been more at stake than the usual vanities. If the court's landmark ruling on the European Union's Lisbon Treaty is also taken into account, the judges in their trademark red robes have already crossed Merkel three times in the last few years. The Karlsruhe decisions read like indictments of a chancellor who, in the judges' opinion, is ignoring the basic rules of democracy with her bailout policies.

Citizens applaud them for their decisions, and it is of course the judges' job to keep the executive in check when necessary. There are those in Berlin, however, who increasingly suspect that the court is in league with those populists and euroskeptics who are fundamentally opposed to the project of European integration.

German Environment Minister Peter Altmaier, a member of Merkel's CDU, recently raged against the judges' criticism of Europe in a meeting of fellow party members. In Altmaier's view, the judges are motivated by a fear of irrelevance. And it's true that further steps toward integration typically do lead to a loss of power for the constitutional court, with the European Court of Justice gaining importance as more and more power is transferred to Brussels.

A powerful German institution has already fallen victim to Europe once before. When Germany was still using the deutsche mark, its central bank, the Bundesbank, had the last word on all questions of monetary policy. Since the introduction of the euro, however, the Bundesbank has lost its old luster, shrinking into a sub-organization of the European Central Bank (ECB). The Federal Constitutional Court is apparently determined to avoid a similar fate.

The power struggle is happening at precisely a time when the judges bear an historic responsibility. This time, the issue at stake is not some domestic political question like the national census or the subtleties of electoral law. Instead, the guardians of the constitution have nothing less than the country's prosperity in their hands.

If they stop the efforts to save the euro, it's possible that not only could they drag Germany and Europe into a deep recession, but they could also deal a death blow to unity on the continent. For this reason, Merkel's now-famous remark that "if the euro fails, Europe fails" was also intended as a warning to the Karlsruhe court.

The power struggle is entering a new round this week. On Tuesday, the court will consider requests for a temporary injunction on the permanent euro rescue fund, the European Stability Mechanism (ESM), and the fiscal pact, which is intended to force signatory countries to practice stricter budgetary discipline. Nothing has been decided yet. But just the fact that the judges have set a date for a hearing indicates how seriously they take the arguments of euroskeptics like Peter Gauweiler, a politician with the conservative Christian Social Union (CSU).

Are Judges Safeguarding Democracy or Their Own Power?

No one embodies the constitutional court's new approach quite as much as its president, Andreas Vosskuhle. When Vosskuhle, the head of the University of Freiburg at the time, joined the court in May 2008, he was only a second-choice candidate. In fact, the SPD had intended Horst Dreier, a well-known law professor, for the position. But the CDU and its Bavarian sister party, the CSU, rejected him because, among other things, he had mused over qualifying the ban on torture.

Instead of Dreier, a pro-European, Vosskuhle rose to the presidency of the court in March 2010. Since then, the court's Second Senate, which Vosskuhle chairs, has made a series of decisions that many in Berlin and Brussels see as a rejection of the idea of European integration. "The preamble of the constitution makes Europe into a major premise of our constitution," says Alexander Graf Lambsdorff, the head of the pro-business Free Democratic Party (FDP) group in the European Parliament. "Today's judges treat it like an annoying postscript. That's alarming."

It would be too easy to brand Vosskuhle himself as a euroskeptic. Of course, the Constitutional Court has an obligation to consider how the citizens of Europe can be given more democratic powers, rather than being reduced to mere spectators.

But many in Berlin are troubled by Vosskuhle's somewhat academic worldview. While the euro had politicians rushing from one crisis summit to the next, the professor was discussing the monastic calm on the Federal Constitutional Court in the newspaper Die Zeit. "Politicians need more moments of deceleration and reflection to think about fundamental decisions," Vosskuhle told the newspaper in an interview. It's like telling a mother of three adolescents to sit back and relax.

It isn't just a matter of form. In 2009, for example, the court, under then Vice President Vosskuhle, reached a decision on the Lisbon Treaty that weighed heavily on politicians. Many interpreted the decision to mean that the limits of the German constitution had largely been exhausted, and that further European integration was only possible if Germans voted on a new constitution.

The decision can be seen as a call to take the "gamble of democracy," as Vosskuhle once said. In fact, there are indeed good reasons to allow citizens to decide whether they want to see the country they know dissolved into a new entity called Europe. Seen in this light, the Constitutional Court is the keeper of the will of the people.

But a less charitable interpretation of the verdict is also making the rounds within the government. Critics of the court say that because the judges knew that the Germans would never agree to give up their sovereign state, they used the decision to safeguard the importance of their own court.

It is difficult to say which interpretation is correct. It is clear, however, that the Lisbon verdict presents politicians with nearly impossible tasks. The problems begin with the fact that the judges' decision is open to interpretation. Naturally, politicians could heed the advice of former Constitutional Court judge Udo Di Fabio and simply continue with the old constitution, as if nothing had changed. There is still a lot of room left in the constitution for further European integration, Di Fabio said in a SPIEGEL interview.

But do the current judges agree? Vosskuhle, at any rate, said in a discussion about the limits of the constitution last fall that one shouldn't behave "as if there were still an incredibly large amount of the sausage left."

It is unclear which opinion applies -- that of former judge Di Fabio, who authored the rulling on the Lisbon Treaty, or that of current President Vosskuhle.

A New Legal Basis for the State?

Merkel's people, at any rate, are already planning for the possibility that the Karlsruhe court will stop a further transfer of power to Brussels. One option would be to convene a constitutional convention, which would then establish a completely new legal basis for the state.

This is a nice idea, in theory. In practice, however, such a convention would occupy the energies of politicians for years to come, at precisely a time when the common currency is tottering. Not surprisingly, key members of the coalition rule out this scenario.

Another option would be to amend the German constitution to include a new article on Europe. It would open the door for an integration process that would end in a European federal state.

Just how far the government's thinking has come was evident in a SPIEGEL interview given by Finance Minister Wolfgang Schäuble two weeks ago. Schäuble said that a referendum on the constitution could "happen more quickly than I would have expected a few months ago." At first glance, Schäuble's words sound like a kowtow to the will of the Constitutional Court.

A different point of view is being disseminated within the government, however. According to government sources, Schäuble has made a subtle threat to the court. If the constitution is absorbed into a European federal state, this would also lead to a loss of power for the Constitutional Court. For this reason, so goes the argument, the Karlsruhe court should beware of getting in the way of Merkel's European policy.

The pro-Europeans are rooting for Schäuble in his fight with the Constitutional Court. Some of its verdicts are "characterized by great ignorance," says Martin Schulz, the Social Democratic president of the European Parliament.

The members of parliament would probably be less sensitive if the judges would adhere to the same standards they establish for others. When it comes to their own election, the judges are not overly keen to embrace transparency. For the last six decades, the judges on the Constitutional Court have been chosen in backrooms. The judges themselves have repeatedly resisted having to appear in a public hearing, like candidates for the United States Supreme Court.

Last Thursday, Karlsruhe decided on whether the selection of Constitutional Court judges is in keeping with the constitution. It ruled that decisions made out of the public eye are completely acceptable. 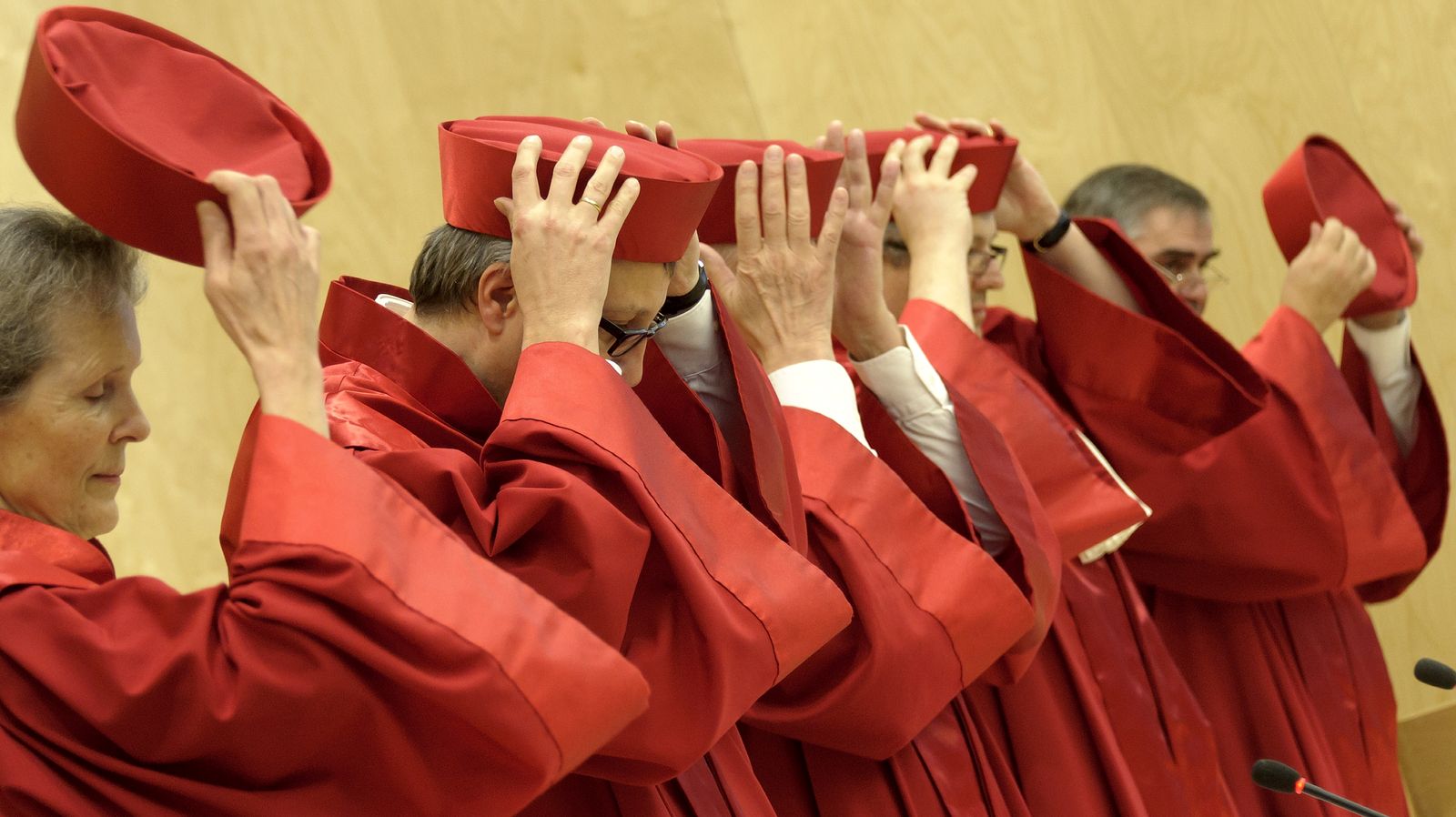