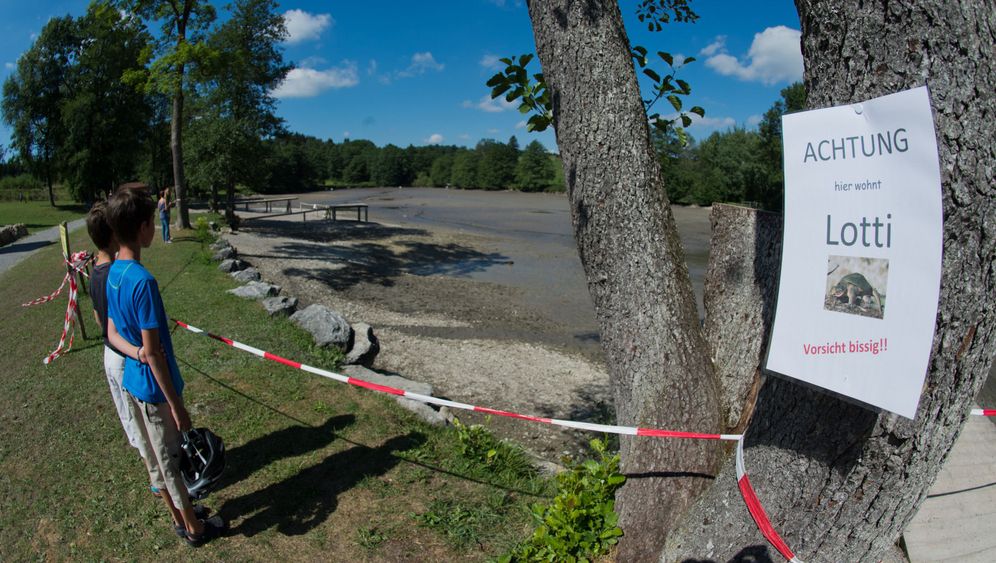 Even at night, the Bavarian village of Irsee isn't able to settle down. The town's mayor, Andreas Lieb, was at the nearby lake Oggenrieder Weiher on Tuesday evening when he came across four people busily working away in the darkness. Lieb promptly asked the unwanted guests to leave. "They were pros," says Lieb, adding that they were equipped with high-powered flashlights and protective clothing.

The night-time visitors were attracted to the lake due to an incident that occurred there last week: An eight-year-old boy's Achilles tendon was severed while playing in the water -- and experts believe that the injury was caused by an alligator snapping turtle.

Since then, locals have been searching for the beast, which has been christened "Lotti." It is a name that is likely to go down in history as the official mascot of the 2013 silly season. She has big shoes to fill, preceeded as she is by the likes of Heidi the cross-eyed opossum, Bruno the ursine interloper, Yvonne the escaped cow and Petra, the swan who fell in love with a pedal boat.

Lotti, though, is different. While Heidi et. al. were documented in various video clips and photographs, Lotti's actual existence has yet to be proven. Strictly speaking, the Bavarian village is still looking for its summer mascot, and it's all hands on deck.

Many things have changed in Irsee since the incident: The lake has been drained, the surrounding grounds fenced off and the lake's fish have been temporarily relocated to another body of water nearby.

The village has even set up a crisis committee, consisting of the mayor, a representative from the local administrative office, the head of the fire department, a policeman and a nature conservation expert. Eight representatives of Munich's reptile redistribution agency spent the day in Irsee on Tuesday, trudging through the mud in search of Lotti. A canine handler and his sniffer dog also got involved.

The search was unsuccessful. On Wednesday, five beaver traps were installed and baited with fish in the hopes of attracting Lotti. The hope, Mayor Lieb says, is to capture Lotti alive.

Nobody has yet laid eyes on the reptile. But there are several indications that the object of the search does, in fact, exist. According to Markus Baur of the reptile redistribution agency, the boy's injuries are consistent with the bite of an alligator snapping turtle. He says that it is not impossible that such a reptile, which are native to North America, is to be blamed.

Baur himself spent several hours on Tuesday wading through the mud. The unsuccessful search was almost as frustrating as the crowds of curious onlookers that gathered at the site, making the hunt for Lotti significantly more difficult. "There were even elderly men with walkers", he says. "Self-declared animal mediators and esoterics" also gathered at the scene in an attempt to impart their knowledge.

According to Baur, it is important that a sense of calm return to the lake, otherwise the alligator snapping turtle may choose to remain hidden in the mud. Members of the search committee have their work cut out for them: on one side of the site, there is a stream running into the lake, while on the other, there is access to other bodies of water. It is not unlikely that Lotti has already made her way into a neighboring pond.

So far, the search for the turtle has not been particularly expensive. The voluntary fire brigade has done much of the heavy lifting, and other volunteers have also come forward. The mayor says that if Lotti is not found within two to three months, there will be no other option but to excavate the lake. Such an endeavour would cost in the region of €100,000 ($133,000).

Baur, a veterinary expert with a focus on reptiles, warns people not to get too hysterical. Alligator snapping turtles, he says, are sluggish and not naturally aggressive. They only act out when feeling threatened. But, he says, Irsee's reaction to the threat has been the correct one.

The phantom turtle's origin is unknown, though police are following up on a phone tip-off from a man who claims to know who released the turtle into the lake.

Mayor Lieb is hoping that the commotion in his community will soon die down. The 50 year old has departed on holiday for a couple of days, one that he was forced to postpone due to the week's unfortunate events. His deputy Bertram Sellner is taking the reins while Lieb is gone. On Wednesday, his replacement already announced several further measures in the search for Lotte, including night-vision goggles. "We are lying in ambush," he says.