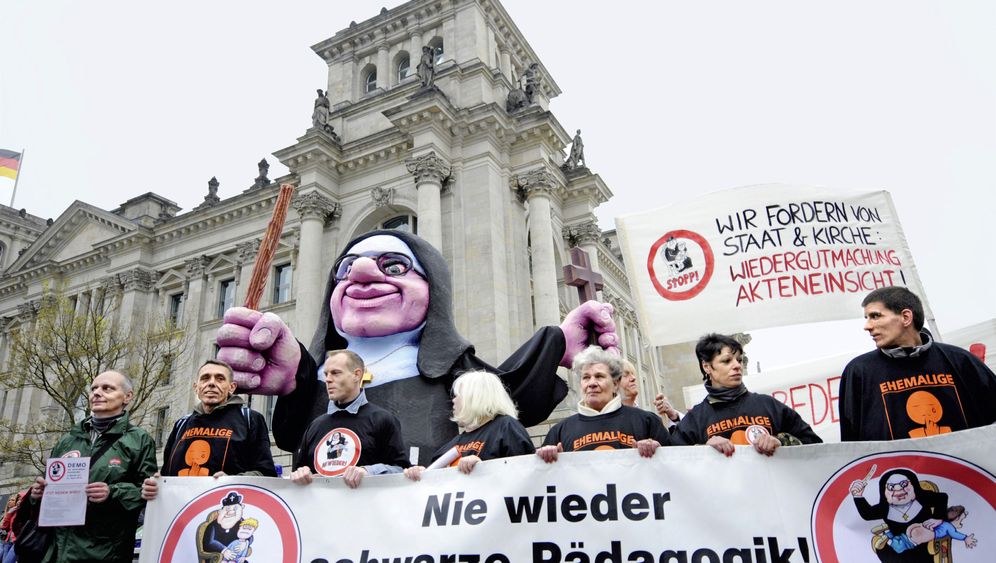 Heinrich Mussinghoff, the Roman Catholic bishop of the western German city of Aachen, is relentless when it comes to investigating abuse cases. "We make sure that such deeds are thoroughly investigated, and we punish the culprits if they are found to be guilty," he said in an Easter Vigil sermon. "We pay attention to the victims and offer humane, therapeutic and pastoral support."

Christopher, 19, lives in his diocese. He claims that he endured several years of sexual abuse at the hands of Georg K., a Catholic priest, up until 2007. It is one of the most recent cases in the Catholic Church in which serious accusations have been made.

But Christopher says he has seen no evidence of the Church's alleged "investigation" and "support" to date. "I want Father K. to finally be punished, and to be prevented from having access to any other children," he says. He accuses Mussinghoff and the German Bishops' Conference, the Catholic Church's leadership body in the country, of doing more for his tormentor than for him. "I have lost confidence in getting any help from the Catholic Church," he adds.

The German bishops bickered for months and suppressed the sex scandals in their ranks. But now even Pope Benedict XVI is promising "transparency" and an uncompromising investigation into the crimes, as well as calling for "penance" and "atonement." And this Friday, when the German government holds round-table talks for the first time with representatives of the church and society, the word "reconciliation" will be on the agenda. The discussion will also focus on "recognizing the suffering of the victims."

But how believable can such promises be? Is the church truly prepared to come to terms with its sex problem? Or will its characterization of the press's reporting on the issue as "gossip" come back to haunt it given that its strong words have hardly been followed by convincing actions?

Despite the church's efforts -- which have come in the form of telephone counseling hotlines, advice centers, officials appointed to address abuse cases and verbose statements in which the church expresses its dismay -- many victims' hopes for justice are turning into disappointment. The hotline installed by the Bishops' Conference shortly before Easter was so overloaded from the start that only a few hundred out of thousands of attempted callers were in fact connected to counselors.

Abuse Victim: 'Investigations Are Avoided if at all Possible'

Many of those who overcame their own reluctance to break the silence in recent weeks are now disappointed by the response. They feel palmed off with empty phrases, boilerplate e-mails or answering machines. "There is no uncompromising investigation going on," Alexander Probst, who was sexually abused when he was a member of the famous Regensburg Domspatzen Catholic boys choir, said on a prominent German talk show two weeks ago. "Investigations are avoided if at all possible," Probst said. Instead the church is trying to ride out the scandals, he claimed.

In this vein, many a bishop is seeking to downplay sex abuse as a problem of past decades, in which violence against children was supposedly "normal." The bishops also point out that there were more abuses in those days because there were more priests. But current cases don't fit into this picture.

One of these current cases is that of Catholic priest Georg K.. On Jan. 8, 2010, abuse victim Christopher's parents reported to the diocesan office in Aachen. "Our son was sexually abused by Georg K. for years," they claimed. But the parents say the have yet to receive a response from the relevant officials.

The alleged misdeeds would not fall under a statute of limitations, either. The presumed culprit is known, and the diocese is responsible for the priest. Evidence could be obtained, and other victims and witnesses could be found.

Nevertheless, Mussinghoff -- who is also the deputy to the chairman of the German Bishops' Conference, Chairman Robert Zollitsch -- and his diocese have not reported the case. And because the church apparently did nothing, despite Bishops' Conference guidelines, the victim's family, following the advice of a group called the Initiative Against Violence and Sexual Abuse of Children and Youth, went to the police.

"Because the church has not lived up to its promises, despite the parents' complaint and despite months of debate over sexual abuse, those responsible must step down, starting with Heinrich Mussinghoff, the Bishop of Aachen," said Johannes Heibel, the initiative's spokesman.

The public prosecutor's office in the western city of Krefeld has now launched an investigation into charges of serious abuse and sex games involving children under the influence of alcohol and drugs, as well as pornographic photos and videos.

Georg K. is believed to have seriously abused Christopher starting at the age of 10. Other children were apparently also victims. Several years ago, a pastor and parishioners made the diocese aware of dubious parties with ministrants and of minors using the sauna in the parsonage.

Priest Allowed Boys to Smoke and Drink, Gave Them Gifts

Mussinghoff's staff spoke with K., who denies the sex abuse to this day and claims the allegations are the result of "machinations." But it appears that they did not investigate the charges thoroughly enough in the community and among its youth. In 2007, they transferred the priest, without further ado, to a German parish in Johannesburg, South Africa, but neglected to provide officials there with the details of K.'s past.

The alleged incidents in K.'s parish were nothing if not reprehensible. Abuse victim Christopher has now told investigators that the pastor systematically used false pretenses to secure the trust of underage boys. Another victim reports: "In his parsonage and on outings, he let us do things that we weren't allowed to do at home: smoking, alcohol, hashish. He gave away mobile phones, game consoles and notebook computers."

But apparently Father K. expected something in return. After a party at the parsonage, where a great deal of alcohol was consumed, the pastor allegedly fondled S., an underage boy, in front of witnesses and then placed the boy in his bed. Christopher also reports a similar experience: "He gave me drugs to make me defenseless. We smoked hashish in the parsonage garden and burned bowls of incense so the neighbors wouldn't notice." There was pizza and beer after one youth event, when Christopher was 12, and the boys were allowed to drink schnapps until late at night. "I had no experience with alcohol and I was no longer in command of my body," says Christopher.

"Georg K. carried me into the parsonage and put me in a bed. First he took off all my clothes, and then he undressed. Then he laid on top of me and abused me." According to Christopher, the pastor was obsessed with sex. "K.'s computer was filled with pornography, and he he was active in the relevant online forums. As a child, I had to assume the role of a partner." He mentions sex toys and that there was always lubricant on the night stand. To this day, Christopher hates all lotions and creams, and he even avoids suntan lotion. "I always felt incredibly dirty and taken advantage of. After being abused, I always had to take long showers to rid myself of that feeling."

The young man believes that there are still many other victims. He recalls the priest's collection of pubic hair, which he kept in precisely organized plastic jars in a desk in his private study. Christopher also says that K. made videos and digital photos of sex acts. "The people from the diocese ought to come here and finally talk to everyone," says Christopher.

When his father reported Christopher's abuse accusations to Heiner Schmitz, the head of the personnel department in the diocese, in January, Schmitz apparently replied: "Oh, and I was under the impression until now that these were merely rumors and that there was no truth to them."

Father K. is far away in South Africa. Nevertheless, both the diocese and the German Bishops' Conference, where the priest has been employed since 2007, will not be able to rid themselves of the problem quite that easily.

Shortly before Easter, there was an altercation in the German parish of St. Bonifatius in Johannesburg. Peter Lang, the head of the foreign office of the German Bishops' Conference, was visiting the parish to attend its annual meeting. The matter of Father K. was raised, but only as a secondary issue. Nevertheless, a number of parents present -- who had also filed a legal complaint over his alleged molestation of children receiving communion in 2008 -- had a strong need to finally discuss their concerns with someone.

"What I find so sad and disappointing is that when the five sets of parents needed support, asistance and guidance, where did it come from?" said one of the affected fathers. "Not the Church! ... Not a word from anyone here or from the Church. Not a phone call to ask how the boys were. No contact to ask how they were coping. Not a question, do you need any help. Not a word. ... Where were you?"

A parish official put an end to the discussion by pointing out that it was not on the agenda, and the parents of the affected children left the church auditorium. Lang did not object and did not speak with the parents again. Instead, he offered to speak with anyone in the parish and said that he wanted to visit the accused priest.

Because the priest's contract in Johannesburg has already expired, he will not return to the parish. Despite the accusations in Germany, however, a decision has not yet been reached as to whether he will be assigned to work as a pastor again.

In the case of Father K., Bishop Mussinghoff has not lived up to the promises of his Easter Vigil sermon. "We've only received a phone call from the father. The boy, as the victim, should have contacted us directly," says a spokesman of the Aachen diocese, commenting on the accusations. "We shouldn't be contacting him."

Even After Conviction, Pedophile Priest Worked for Church

The case of Georg K. isn't the first time Mussinghoff has been confronted with the issue. Most recently, he was involved in a case in Krefeld that had many similarities to the Georg K. abuse allegations. But no one seems to have learned anything from it. The Krefeld priest had also invited underage boys to use his sauna, and in the end it was discovered that he was part of a local pedophile ring with connections to the European pedophile community. The priest, a church educator and a senior official in the city administration were apparently involved.

"In light of these experiences among senior leaders in the diocese, the first suggestions of Georg K.'s sauna activities should have sounded alarm bells in the diocesan office," says Johannes Heibel of the Initiative Against Violence and Sexual Abuse of Children and Youth, who is sharply critical of the church turning a blind eye to the abuse allegations.

But the Aachen diocese's treatment of the pedophile priest in Krefeld was lenient at the time. Even after his conviction, the man continued to work for the church for a long time. Despite another relapse, and after being removed from the clergy, he worked in the archives of the Aachen Cathedral. "That," says 19-year-old Christopher, "is not something I want to see happen with Georg K."