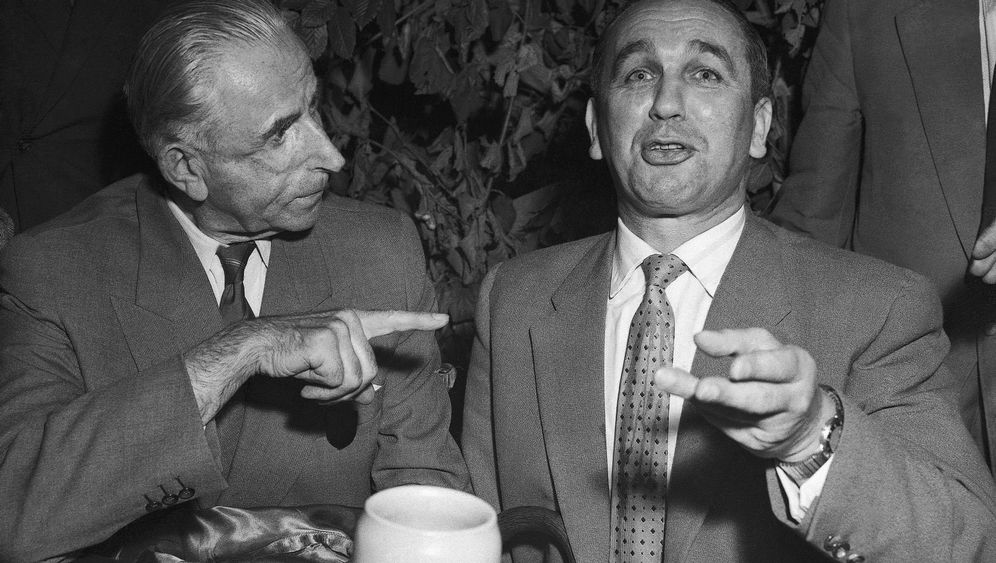 Photo Gallery: The Postwar Role of the Brown Shirts

On the evening of Aug. 7, 1953, the art nouveau room at the Fährhaus (ferry house) in Hamburg's Winterhude neighborhood was filled to capacity. A grayish-blue cloud of cigarette smoke hung over the heads of the hard-faced men in the audience. Under their shirts, many had their blood types tattooed onto their left upper arms. They were veterans of the Waffen-SS, who had gathered at the ferry house, a popular Hamburg destination.

Parliamentary elections were around the corner, and the speaker, a short, dashing former lieutenant, was courting the one-time members of Hitler's elite unit. As a former fellow soldier he told the men that he had "always felt particularly confident" when he was fighting alongside the Waffen-SS. It was unfortunate, a newspaper for Waffen-SS veterans later wrote in reporting on the event, that its members were often confused with those of the Gestapo and unjustly prosecuted.

There is no record of the audience's reaction to the speech, but it seems likely that the Hamburg transportation official's words were met with roaring applause. He was a member of the center-left Social Democratic Party (SPD) and an economist, and he was about to embark on an unparalleled political career. His name was Helmut Schmidt, and he would later become West Germany's chancellor.

Courting Members of a 'Criminal Organizaton'

Schmidt wasn't the only one courting the Waffen-SS veterans. Chancellor Konrad Adenauer of the conservative Christian Democratic Union (CDU) party and SPD postwar leader Kurt Schumacher also tried to garner votes among members of the former elite unit, which the Allied judges at the Nuremberg military tribunal had defined as a "criminal organization."

Adenauer even visited former Waffen-SS General Kurt Meyer ("Panzer Meyer," or "Tank Meyer"), who was then imprisoned in the town of Werl, near Dortmund, for his involvement in the 1944 execution of about 20 Canadian prisoners of war in France.

Conservatives like philosopher Hermann Lübbe later praised the founding generation for their mild treatment of the SS unit, noting that this "integration" had guaranteed the stability of the young democracy. But younger historians have repeatedly called this assessment into question.

Karsten Wilke, an academic in the city of Bielefeld, has now put this hypothesis to a special test. Wilke has turned his attention to a group known as the "Mutual Help Association" (HIAG), the traditional association of the Waffen-SS, which was dissolved at the national level in 1992, and whose records he has been able to analyze.

The records suggest that although the former Nazis claimed to have been reformed (making statements like: "Camaraderie ends where crime begins"), the brown demon still ruled their internal thinking. The efforts to accommodate the former Nazis by democrats like Schmidt and Adenauer remained fundamentally unrewarded.

Instead, HIAG representatives used the widespread, but unfounded, fears of their members to help secure retirement pensions and, through public falsification of history, aided in ensuring that crimes remained unpunished for years. Wilke concludes that HIAG wrote "the Waffen-SS into the 'legend of the clean Wehrmacht.'"

But it was precisely the Waffen-SS that was particularly brutal in its treatment of prisoners and civilians. The divisions, which originally consisted only of volunteers and later included conscripts who saw themselves as the armed wing of the SS, also encompassed the SS Totenkopfverbände (skull associations), which guarded the concentration camps. This was one of the reasons the Nuremberg judges accused the Waffen-SS of war crimes and crimes against humanity.

Although these veterans had no political ambitions after 1945, they did want to receive the same attractive temporary allowances and pensions as members of the regular German army, or Wehrmacht. Of course, they also wanted to rehabilitate their image in the wake of the Nuremberg trials.

For this reason, HIAG maintained close ties with both the ruling CDU and the opposition party, the Social Democrats (SPD). The SPD, having been a resistance party to the Nazis, was a moral force. Schumacher, who had lost one of his legs after spending years in several concentration camps, nonetheless still met with a HIAG delegation in Bonn in 1951, thereby opening a door to the SPD for the Waffen-SS veterans.

The organization's influence was based largely on their vast exaggerations. HIAG's spokesmen claimed to represent up to 2 million people, and they lured the Social Democrats with the prospect of "winning millions of German votes." In reality, however, only 250,000 Waffen-SS veterans were living in West Germany at the time. Of that number, only 8 percent were members of HIAG -- not a particularly impressive potential group of voters. But the bluff was successful.

Schumacher justified his meeting by pointing out that it was "not a good thing for a young democracy" for such a large group of dissatisfied people to be allowed to form.

"Panzer Meyer," who had been released from prison and later became the national spokesman of HIAG, skillfully took advantage of these fears. On one occasion, the charismatic former general threatened that his men could drift into extremist right-wing parties "out of stupidity," unless the SPD championed their cause. He also claimed that the Soviet ambassador had tried to establish contact with him, and that such attempts from the East had a "certain likelihood of succeeding if the integration of the former members of the Waffen-SS ran into difficulties in the democratic nation."

The SPD leadership was astonishingly gullible. Schumacher believed HIAG when it claimed that the majority of Waffen-SS veterans had turned their backs on Nazism and had fallen into a "pronounced pariah role," and that it was necessary to help them shed this label.

Later, both the SPD defense policy expert Fritz Erler, a former member of the resistance himself, and Helmut Schmidt remained in contact with HIAG. Social Democrats appeared at its events and helped the right-wing group remain socially acceptable. In the Bundestag, Germany's parliament, the SPD and the ruling CDU agreed that the former Waffen-SS members would gradually be granted the same pension rights as former members of the Wehrmacht.

At least the Bundeswehr, Germany's postwar military, in which the former SS officers would have liked to have continued their careers, remained largely off-limits to HIAG members.

On the surface, many HIAG members pretended to be reformed. Meyer, a convicted war criminal, assured Erler that criminals had "no business in HIAG." When a wave of anti-Semitic graffiti in West Germany caused a stir in 1959 and 1960, he offered to post former Waffen-SS members as guards in front of synagogues and Jewish cemeteries -- a PR coup that was as clever as it was cynical.

Of course, this never happened and Meyer distanced himself from the proposal. Instead, the HIAG leadership maintained contacts with right-wing extremists. Wilke discovered "consistently anti-democratic, racist and anti-Semitic positions" in the comments of HIAG members.

In 1959, for example, a HIAG member wrote to Meyer: "Unfortunately, the Israelis control and substantially influence almost everything that has something to do with the public."

A Bavarian HIAG member was even more direct when he wrote: "The Jews, who have become powerful once again, would not hesitate to politically destroy any member of parliament who dared to campaign for the rights of the family members and survivors of the former Waffen-SS."

Celebrating Their Nazi Past

In 1953, HIAG members staged a torchlit procession during a "solstice celebration" and marched up to Staufeneck Castle in southwestern Germany, belting out the Nazi song, "This Is the Guard that Adolf Hitler Loves." Kurt Meyer, Jr., the son of "Panzer Meyer," later wrote that his father, the HIAG spokesman, had kept a photo of himself with Hitler on the wall above his desk.

In the 1960s, when it became clear that no further benefits could be attained for HIAG members, the group slowly drifted into open right-wing extremism. For a time, the national organization published a calendar on which Nazi commemoration dates were marked.

It wasn't until the 1980s that the SPD and later the CDU officially corrected their positions. Starting in 1981, HIAG members were no longer welcomed into the SPD.

After that, the issue resurfaced only one more time within the SPD. In 2006, the Nobel Prize winning author Günter Grass, who had been a Social Democrat for many years and was an SPD campaigner, admitted to having been a member of the Waffen-SS. But Grass was never a member of HIAG.

3 Bilder Photo Gallery: The Postwar Role of the Brown Shirts