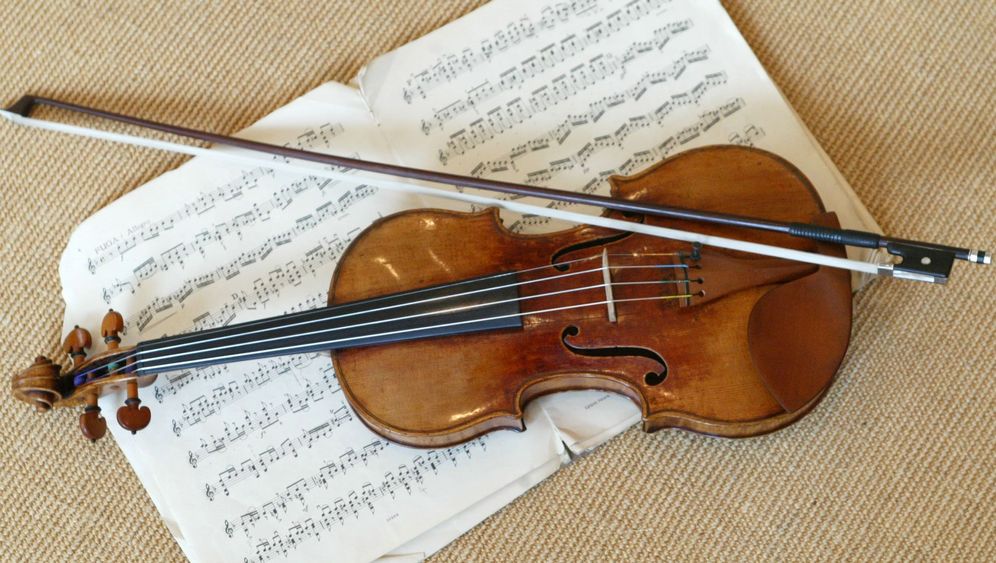 The gentlemen from the Bremen Sparkasse savings bank have gathered around a table holding two icons of Western culture, violins by the godfather of violin-making, Antonio Stradivari. They are 294 and 325 years old, respectively, and they have a combined value of €5.2 million ($6.8 million).

Or so the gentlemen from the bank believe.

They have invited violinmaker Roger Hargrave, 64, from the nearby town of Schwanewede in Lower Saxony, to join them. He glances at the instruments and quickly delivers his devastating verdict: "These are not Stradivaris." When Hargrave thinks about the meeting early last year, he remembers that the Bremen bankers were "completely shocked -- there was no oxygen left in the room." One of then, he says, urged him to exercise discretion. "They were extremely embarrassed to have fallen for such a huge scam."

It was their longstanding client Dietmar Machold, 62, who had given them the two violins as collateral for a loan in the millions. The businessman, who had lived in Bremen for many years, had a good reputation. His business had been in the family for five generations, and after moving from Bremen to Vienna, he had risen to the top of the industry worldwide.

Machold was the Stradivarius man. There are still about 600 violins, 60 cellos and 12 violas from the famous workshop in Cremona, Italy in existence today, and Machold has held about half of these instruments in his hands. His reputation was so stellar that he was permitted to prepare the appraisals himself for the two Stradivarius instruments given to the Bremen bank as collateral, and he has also appeared in court as an expert witness.

Banks Made it Easy

But Machold will appear in court in a different role -- as a defendant -- presumably this summer. The Vienna public prosecutor's office has charged him with embezzlement, bankruptcy fraud and grand commercial fraud. The prosecutors received 46 criminal complaints from Australia, the United States, the Netherlands, Belgium and Germany, where he is accused of the loss of valuable instruments.

For months, Austrian investigators and 72-year-old Jörg Beirer, the administrator in the bankruptcy proceedings, have been trying to shed light on Machold's business dealings. Their efforts have pieced together a picture of a businessman who was probably cash-strapped for years and sold violins he had taken in commission for millions -- often failing to pass on the proceeds to the instruments' owners or to banks, allegedly using the money to pay off other debts instead.

The investigators and the administrator have discovered how Machold went about his fraudulent activities, but also how the banks made it easy for him. No one noticed when he used the same violin as collateral for loans with two different financial institutions.

Last April, the gentlemen from Bremen Sparkasse, who are now unwilling to comment on the incident, citing bank secrecy regulations, finally realized that the violins in their safe were more or less worthless. The bankers had Hamburg forestry expert Micha Beuting examine the alleged Stradivari instruments. If they had been genuine, the trees used to make them would have to have been felled before 1737, the year of Antonio Stradivari's death.

In his report, Beuting noted that based on the growth rings, the trees had been cut down decades after Stradivari's death -- probably in the northern Alps or the Bavarian Forest, but clearly not in the southern Alps, where the spruce trees Stradivari used to make his violins grew.

Machold duped the bankers. "The two violins are only worth about €2,000 or €3,000 each," says violinmaker Hargrave. The bankers had no choice but to file a claim for €5.9 million in the insolvency proceedings before Vienna's commercial court.

Claims Adding Up to €100 Million

The Bremen Sparkasse is not the only injured party in what is the biggest case of fraud in the worldwide trade in musical instruments to date. Since Machold Rare Violins, the network of companies that Machold eventually renamed Kadenza GmbH, collapsed in late 2010, the scope of the damage has emerged. Banks, customers and former employees have filed claims totaling about €100 million in the case.

In the bankruptcy proceedings, petitioners have filed claims to more than 200 string instruments, the whereabouts of which, says Beirer, "are unknown, because Machold's records are missing."

Machold, the formerly well-to-do northern German businessman known for his cosmopolitan appearance and demeanor, is now in detention awaiting trial at a prison in Vienna's Josefstadt district. He has confessed to some of the charges and can expect to be sentenced to several years in prison.

In good times, Machold had offices in New York, Chicago, Tokyo, Seoul, Zurich, Vienna and Bremen. He profited from the fact that prices for Stradivarius violins and other historic violins, such as those by Guarneri del Gesù, have increased up to 200-fold since 1960. In June 2011, an anonymous buyer paid the record price of $15.9 million for the "Lady Blunt" violin.

In the world of violins, anyone who has to ask why a $6-million Stradivarius weighing in at about a pound is now worth almost 250 times the same amount of gold is considered a philistine.

A Castle and Honorary Titles

Machold made millions. After the sale of three Strads and a Guarneri del Gesù, he bought the 700-year-old Eichbüchl Castle outside Vienna in 1997 for a million deutsche marks, and spent another four million on renovations. He wanted everyone to see how successful he was. Ten years later, when he married teacher Barbara Drews, now 36, the couple drove off to the south of France in a yellow Rolls-Royce.

A lawyer by trade, Machold became a respected member of high society. In Austria, a country enamored of titles, there are few things more appealing than being named an honorary professor -- the reward the country's ministry of culture bestowed upon Machold for a collection of historic violins he had obtained for the National Bank of Austria. But the titles didn't stop there. In a ceremony at Eichbüchl Castle in 2005, Erwin Pröll, the governor of the state of Lower Austria, awarded Machold the "Grand Gold Medal of Honor for Services to the State." Best of all, he anointed Machold a "citizen of the world" in full view of the illustrious assembled guests.

The global citizen's current radius is limited to his daily walk in the prison yard. He has lost everything. His castle was sold for €3.5 million, and the inventory, consisting of period furniture, rugs and the library, for €120,000. The house in Bremen he inherited from his parents was sold for €350,000. Machold has even lost his wife Barbara, who obtained a divorce in February.

The same month, during a six-hour hearing at the State Office of Criminal Investigation in Vienna, Machold came clean about a Stradivarius violin worth more than €2 million, the "Ex-Rosé." He told police that he had used the violin as collateral with two banks. When he sold it in 2006 for €3 million, he paid off the loan with the first bank, BAWAG, he said. The second bank, Bayerische Hypo- und Vereinsbank, got nothing. This was apparently not an isolated case. "I duplicated certificates for violins when I needed one," Machold admitted.

The Gift of Persuasiveness

Jörg Beirer, one of the best-known Austrian bankruptcy administrators, is surprised. In some cases, says Beirer, Machold provided the banks with nothing but photocopies of instruments or appraisals he had prepared himself. "It isn't standard bank practice to issue millions in loans in return," says Beirer. After meeting Machold a few dozen times, he recognized a talent that could have fooled the bankers. "The man knew how to use an extremely flattering portrayal of himself, complete with castle, camera and clock collections, expensive cars, companies scattered around the globe and a network of experts, to affect something that he isn't and doesn't have," says Beirer. Machold, he adds, has the gift of "persuasiveness accompanied by self-confidence and charm."

It appears that by the middle of the last decade, the dealer was only able to make ends meet by constantly coming up with new deceptions to pay off his debts with banks and customers.

The 1765 Carlo Ferdinando Landolfis viola, for example, was taken along a strange path. The Dutch national William L. gave Machold the instrument, worth €1 million, in commission, and then it disappeared. Then the viola reappeared on a list at Flessabank, where Machold had used it as collateral for a loan.

But the lender, based in the Bavarian city of Schweinfurt, only had its collateral on paper. In reality, the viola, as well as a 269-year-old violin crafted by Camillus Camilli, ended up with an Austrian savings bank, Raiffeisenlandesbank Niederösterreich-Wien. The bankers had notified Machold in the early summer of 2009 that they would demand repayment of his loan unless he provided collateral. The end was near. The violin dealer gave them instruments that didn't belong to him as collateral in June 2009. They were seized as part of the investigation.

William L. filed a criminal complaint, setting the process in motion. With that, an increasing number of shady dealings were gradually brought to light. Machold had even cheated his friends, like Dutch citizen Gert Jan K., who had become wealthy as a director and partner in a company listed on the Amsterdam Stock Exchange. A patron of the arts, K. bought historic violins and made them available to musicians. He often entertained the Macholds in his home.

K. testified that Machold had "illegally sold or made off with" five of his instruments and a few violin bows, and he claimed a loss of €20 million.

Another Deal in the Making

Machold repeatedly tried to stall, sometimes for years, banks and customers who were waiting for their money. In late 2010, he mentioned an enormous deal that he had orchestrated in the process of more than 30 trips -- one that would save him. According to Machold, S., a billionaire living near Milan, wanted to buy instruments for €40 million. Of the money, €8 million to €14 million was to be paid "soon" as a first installment. Machold anticipated turning a profit of between €16 and €18 million. And if that weren't enough, he claimed that he expected a profit of €10 million from a deal with the Sawallisch Foundation, based near Bavaria's Chiemsee lake. Finally, a deal he had set up in 2006 with a group of companies from Beijing promised to generate €15 million in profits. But the money never materialized, and Machold's empire collapsed.

Stephan Zinterhof, Machold's lawyer, is convinced that the deal with Italian billionaire S. "would have materialized and could still be concluded today." In an email dated April 16, representatives of the billionaire assured that he was still interested in building a collection of historic instruments, and that the preliminary agreements with the owners of the violins, who wanted to sell their instruments to the Italian businessman, with Machold serving as intermediary, were still valid.

Zinterhof believes that the behavior of some of the banks was questionable. "Given the magnitude of the business, the banks that drove Machold into bankruptcy proceedings ought to be asked whether they shouldn't have been more patient."

Machold's plan to leave his business to his son Lüder one day is no longer an option. When questioned, Machold revealed that he had already told his son years ago that he would first have to "do some serious cleaning up" at the companies. That was probably an understatement.