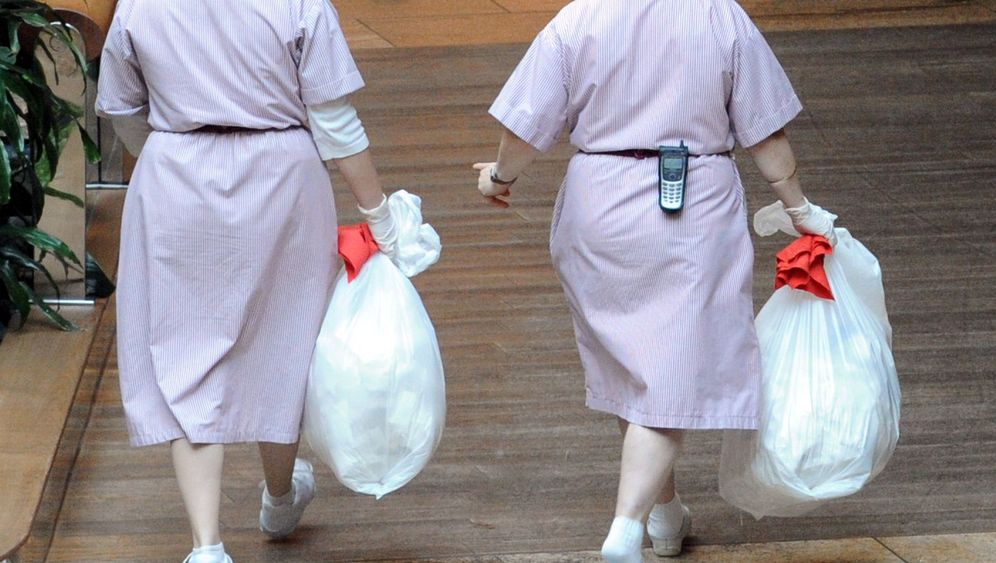 Party leaders have three ways of dealing with an approaching wave. They can resist it, duck or take a wait-and-see approach. Or they can try surfing on it.

German Chancellor Angela Merkel has chosen the third option. For weeks, the leader of the conservative Christian Democratic Union (CDU) party has seen a demand approaching her that she can neither stop nor allow to pass while remaining unscathed -- the demand that she support a push for a comprehensive minimum wage law for Germany.

The issue has broad popular support. In a poll conducted late last week, 86 percent of respondents said they were in favor of the introduction of a legal minimum wage, and even 78 percent of union members supported the idea.

Depite being regarded as one of the West's more progressive and egalitarian societies, Germany has no legal minimum wage, a fact that might come as a surprise to many. For decades, opposing a legal minimum wage was one of the core principles of Merkel's CDU. Against the resistance of the party establishment, Karl-Josef Laumann -- the head of the Christian Democratic Employees' Association (CDA), a wing of the party representing workers' interests -- has shifted the mood in the party in recent months by raising awareness of the issue within the party base. Meanwhile, the CDA wing's seven state associations, led by the chapter in North Rhine-Westphalia, the largest, are now in favor setting a legally mandated minimum wage.

With support for the initiative mounting in the party, the CDU is expected to rubber-stamp a motion with Merkel's blessing at a party conference in Leipzig next week, that carefully avoids the provocative words "legal" and "minimum wage," and yet ultimately calls for just that. According to the motion, it is necessary to "introduce a generally binding wage floor in the areas in which wages set by collective bargaining agreements do not exist."

Opposition from Party and Employers

The most recent about-face marks only the beginning of Merkel's problem, since the business-aligned wing of her party is highly unlikely to abandon its stubborn resistance to the measure. The party also risks upsetting its coalition partner, the pro-business Free Democratic Party (FDP), which still opposes minimum wages. In addition, the coalition agreement between the CDU and the FDP that paved the way for the current government expressly rules out the introduction of a uniform, legal minimum wage. Furthermore, employers are furious while the unions are dissatisfied.

Most of all, the chancellor will have to explain what exactly she means by her proposal. The CDU's internal compromise on the wording of a minimum wage proposal is producing more confusion than clarity.

The call for a general minimum wage raises fundamental questions: How will it affect jobs and competition between companies? Will it interfere with free collective bargaining, which is protected under the German constitution? And how does it fit into the existing German minimum wage system?

Legal minimum wage levels exist in many industrialized nations in Europe and elsewhere. The government sets minimum wages in the United States and France, while commissions address the issue in Japan and Great Britain.

The system in Germany is more nuanced and confusing than in most other countries. It has no uniform minimum wage, only wage floors for individual industries, and they too can be set using various legal provisions. The parties to collective wage agreements are always involved.

Ten industries have minimum wages that are negotiated by the parties to collective wage agreements, which have been declared generally binding in each case. This means that they apply to all companies in the respective industry, whether they are bound by collective wage agreements or not, and whether the employers are located in Germany or abroad.

But these industry provisions do not prevent millions of other employees from being left out in the cold, and having to work for very low wages that are not sufficient for survival. About 20 percent of all full-time employees make less than two-thirds of the average wage. Some 1.2 million people must make do with an hourly wage of less than €5 ($6.90).

With Merkel's about-face, one of the biggest symbolic issues is back on the agenda once again, one that is as controversial and fraught with emotion as Germany's two other major hot-button issues, the law governing store hours (with few exceptions, shops must remain closed on Sundays) and protections against wrongful dismissal.

It was clear to Merkel that there would be resistance in the employers' camp. The proposal had hardly been revealed to the public before Dieter Hundt, the president of the Confederation of German Employers (BDA), said reflexively: "We don't need any more regulations." Hundt noted that that there are already enough tools for setting wages, under both the law and the collective bargaining process. A general legal minimum wage, he said, would lead to job discrimination against poorly qualified workers.

The opponents of a general legal minimum wage argue that it would destroy jobs, because it would make jobs that require few skills economically unattractive for companies. But a study conducted by Germany's six leading economics research institutes and commissioned by the federal government does not support this notion. In none of the industries studied did a minimum wage adversely affect employment.

This is particularly evident in the electrical trade, a sector with many very small businesses. A minimum wage was introduced in 1997 and, starting in 2003, suspended for four years and then reintroduced. "There is no evidence, in either East or West Germany, that the introduction, suspension or reintroduction of the minimum wage had any effect on employment," the study report reads. The only thing that increased and decreased was the average wage.

The unions, led by German Federation of Trade Unions (DGB) Chairman Michael Sommer, ought to now feel victorious, after having spent years fighting a vehement campaign for the minimum wage under the slogan "Poor Despite Having a Job." But Merkel's proposal doesn't go far enough for them. They also doubt whether it will actually become law under the current coalition.

Not 'Worth the Paper It's Printed On'

"The motion for the party conference isn't worth the paper it's printed on," says Frank Bsirske, chairman of Ver.di, the amalgamated service employees union. Although he welcomes the fact that the party is generally addressing the subject of the minimum wage, he feels that the plan has inherent weaknesses. "It is incoherent and contradictory."

"More than anything, the initiative is social sugarcoating," says Michael Vassiliadis, chairman of IG-BCE, the mining, chemicals and energy trade union. "If it were implemented in its current form, bogus trade unions could position themselves to negotiate lower collective wage agreements, as we have seen in the temporary employment sector," says Vassiliadis. "The CDU plan would be a farce."

For Klaus Wiesehügel, the CDU initiative amounts to fraudulent labeling. "It is clearly a campaign maneuver," says the chairman of the construction workers union IG Bau. "In its current form, the CDU motion isn't even constitutional. The emperor looks like he's wearing clothes, but in reality he's naked."

In fact, the CDU motion is full of inconsistencies. The party deliberately uses the phrase "generally binding wage floor" instead of "legal minimum wage." Under the proposal, a commission consisting of parties to collective wage agreements would set this wage floor, using the minimum wage in the temporary employment sector, which is currently about €8, as a guideline. The CDU wants a wage floor "set by the parties to collective wage agreements," but "no political minimum wage."

This is where a serious problem lurks. Employers and employer associations that have been unable to conclude collective wage agreements with unions in their industry could see it as an intervention into their free collective bargaining rights, and they could sue against associations from other industries being involved in a commission that sets minimum wages for their sector.

Another problem is validity. The planned wage floor would only apply in areas where there are no collective bargaining agreements. In the states of the former East Germany, about 80 percent of businesses are not tied to collective wage agreements, compared with 60 percent in Germany's western states. The concept is filled with legal uncertainties, and it raises three central questions:

The debate is also far from settled in the CDU. The party's state governors are, once again, divided over the issue. The biggest bone of contention is the recommendation that the future wage commission use the wage floor for temporary workers as a guideline for setting the minimum wage. In an interview with SPIEGEL Volker Bouffier, governor of the western state of Hesse, decidedly rejects this approach, saying: "I cannot understand why the minimum wage for temporary workers should suddenly be imposed on other industries."

'In a Social Market Economy, the Government Sets the Rules'

At the same time, Reiner Haseloff, the CDU governor of the eastern state of Saxony-Anhalt, feels that using the minimum wage for temporary workers as a benchmark is correct. But he wants to eliminate the differentiation between minimum wages in the eastern and western German states. "If we arrive at a uniform wage floor, it should be uniform throughout the country."

David McAllister, the governor of the northwestern state of Lower Saxony, is even more to the point: "As governor and state chairman of the CDU in Lower Saxony, I am no longer willing to accept certain distortions in the low-wage sector. In a social market economy, the state sets the rules."

But this approach runs up against resistance from the party's economic wing, which intends to overturn the plan at the last minute. Josef Schlarmann, chairman of the CDU wing that represents the interests of small and medium-sized businesses (the motor of the German economy), plans to torpedo the national party organization's recommendation in Leipzig with his own motion. "A national and comprehensive wage determination must be fundamentally rejected," the motion reads. Where there are no existing wage agreements, says Schlarmann, "wage agreements in similar and geographically proximate sectors should be used as a benchmark."

Schlarmann is surprised by the chancellor, who clearly stated her position on the Friday before last in a speech to CDU small and medium-sized business owners in the Bavarian town of Deggendorf. "I don't want a comprehensive, legally mandated, uniform minimum wage, because the conditions in Germany vary widely," Merkel said.

Her former economics minister, Michael Glos, a member of the CDU's Bavarian sister party, the Christian Social Union (CSU), once proposed setting up a "firewall" to prevent the introduction of a comprehensive legal minimum wage. In response, Ver.di Chairman Frank said smugly: "Others in Germany failed once before with the building of a different wall."