Hans-Jochen Vogel was born in 1926, so he’s pretty relaxed about the coronavirus. "At the age of 94, you don’t have to be afraid of the end of life anyway,” says the retired politician, who once served as a minister in the federal government. "But, of course, we would like to avoid my wife or I getting this corona disease."

Vogel lives with his wife in the Augustinum Seniorenstift, an assisted-living facility in Munich’s Hadern neighborhood. For the time being, he’s not leaving his apartment and the couple have all their meals delivered to the apartment. The restaurant at the facility has closed down to avoid contact among residents and children and grandchildren aren’t making visits. "We’re keeping in touch with the outside world by phone,” Vogel says. "And only by phone, because we still live in the analog world."

Vogel was a witness to the curfews after World War II. And when the left-wing Red Army Fraction movement terrorized Germany in the 1970s, he was a German government minister. But, he says, the coronavirus is different. "I've never experienced anything like this before," says Vogel. "Today it's a global situation."

The measures that are bringing public life to a standstill are largely aimed at protecting the elderly, because the disease is often more severe or even fatal for older people. In one nursing home in the city of Würzburg, Germany, four residents died of COVID-19-related complications.

In response, nursing homes and assisted-care facilities have closed their doors to outsiders all over Germany.

"We are closing our building immediately and until further notice because of the danger of infection with corona." Notes like this one posted on a Munich nursing home can be seen everywhere. The sliding glass doors at the entrance no longer open automatically, and a dispenser with disinfectant has been placed in the entrance. The burden of responsibility that has now been placed on home managers and caregivers is considerable. And not everyone feels adequately prepared for the task.

No one wants to experience the kind of dramatic situation seen in the Würzburg nursing home or at a similar facility in Hamburg. Last week, a 76-year-old retiree with a previous condition died in the city. The doctors only detected his coronavirus infection after his death.

It wasn't initially clear whether the man had infected other residents or caregivers at the nursing home. In the following days, there were suspicions of additional cases, but they all tested negative. After cleaning and disinfecting of the facility, public health authorities in the city are keeping it open. This week, a 65-year-old woman died at the facility after having been released from hospital the day before. It is unclear, however, whether the woman died of coronavirus and she had been previously suffering from severe health problems.

Fear on Both Sides

"Everyone is also, of course, being urged to pay closer attention to hygiene measures,” a Hamburg health official says. "But we still need to make sure that people are receiving proper care. In geriatric care, a certain proximity can’t be avoided - when washing, for example." At the moment, this can be frightening for both sides: the elderly, who risk getting infected, but of course also the caregivers, who also fear for their own health.

Just a few kilometers away from Haus Alstertal is another home for seniors surrounded by high trees, the Cura Seniorencentrum Haus Lerchenberg in Hamburg’s Volksdorf neighborhood. There's a sign posted at the door here, too: "Our facility is closed to visitors until further notice!” Anyone wanting to enter has to ring the bell.

"Both the residents and relatives have considerable understanding. They want their parents and grandparents to be safe,” says Sabine Becker, who has spent the last 10 years operating the home. Nine out of 10 of the inhabitants here are over 80 years of age. Many have weak immune systems and are already ill. "So far, thank God, we haven’t even had a suspected case,” says Becker. Cura Seniorencentrum operates a chain of nursing homes with more than 5,600 employees. The company has only reported a single infected employee so far. "The mood and camaraderie are still good," she says.

Becker is also hoping that the more robust among the residents will also take seriously the warnings to keep their distance from others. There’s an outdoor market in Volksdorf on Wednesdays and Saturdays just a few hundred meters away from the home, making it easy enough for many of the elderly here to reach. The short shopping trip is quite popular among the seniors and some from the home even went there last Wednesday. "I couldn’t forbid them from doing it,” says Becker. "There’s no mandatory curfew.”

She says nurses and caregivers at the facility won’t have to worry about having enough protective clothing and disinfectant if they do get a suspected case or actual infection. "Nothing was stolen from us, and we have stocks that will last for weeks. Otherwise, I’d be nervous right now," she says. But stocks of clothing and supplies is far from a given at all nursing homes in Germany right now. This is a source of a lot of uncertainty for some nursing home operators and their employees.

The German Patient Health Foundation has also identified another problem. The foundation’s director, Eugen Brysch, says that most nursing homes or assisted-living facilities aren’t able to adequately isolate corona patients. He argues they don’t have enough nurses, doctors or space to make that happen.

Brysch is calling for the government to develop emergency contingency plans for nursing homes and outpatient services of the kind already in place for hospitals. To relieve the burden on hospitals that have been focusing on expanding their intensive care bed capacities, additional bed and treatment capacities are to be set up at other hospitals and also possibly at provisional locations such as hotels or convention halls.

The government is also moving to provide relief for nursing homes by reducing the amount of bureaucracy they have to deal with. For example, members of the medical service wing of the statutory insurance funds are no longer required to do physical examinations of the elderly to determine the level of care they need. Instead, those employees have now been freed up to help where they are much more needed – in public health departments and nursing homes.

Brysch says he’s not trying to make people panic with his calls for special quarantine and protection plans for retirement homes. His aim is instead "a realistic view of the possibilities on site.”

Frank Kadereit, the managing director of Evim-Altenhilfe, a nonprofit company providing elderly care services, agrees. It’s important to "lay out all the problems clearly,” without scaring people, he says. Still, what he has to say is anything but reassuring. His company runs 12 nursing homes in the states of Rhineland-Palatinate and Hesse that provide care to 1,200 people. "In an acute case of coronavirus infection, we would be able to act quickly for a short period of a few days," he says. But deliveries of disinfectants have been slow, he adds, and there’s a "glaring” lack of additional supplies of disposable protective gowns and masks.

Kadereit has set up a crisis management team that covers all the homes the company operates. If a case of coronavirus is detected, those affected will be isolated and cared for by the same staff team. "The protective equipment is then concentrated on these people,” says Kadereit.

A Lack of Specialized Training

He fears the coronavirus patients will soon have to be cared for directly in the nursing homes because the hospitals will be overcrowded. "However, our staff lack special knowledge on how to operate ventilators for residents who might need to be hooked up to breathing tubes,” he says.

And who is going to provide care for the sick seniors if the nursing home staff themselves get sick with coronavirus? Many fear getting infected while they’re at work, Kadereit says. He notes that some of the care providers are over 60 and also belong to the risk group.

Most Germans know what is being demanded of caregivers these days. The social networks are full of praise for "the heroes.” "You deserve all our esteem and respect,” one Twitter user writes. "Thanks for being here. #COVID19de #stayhealthy," reads another tweet.

But not every nursing home caregiver is pleased about all the sudden attention. "Yeah, yeah: Thanks that I’m there for all the elderly people in this country as a geriatric nurse,” writes one. "Spare me the lame praise and start pumping more money into the nursing home system.”

Another writes: "Nurses should be appreciated generally – regardless of disasters and the like. Because they’re the ones who help you when you’re sick.” But the male nurse who posted the tweet appears to have kept his sense of humor. "If I could, I’d work from home too,” he writes. "But as a geriatric nurse, hm?? So, I’ll go back to work tomorrow and try to bring people a bit of sunshine.”

Hans-Jochen Vogel the elderly resident at the Münchner Augustinum facility, says he’s still optimistic. "I hope we will see more solidarity in society as the result of this experience,” he says. "That people will want to be there for each other more in the future.” 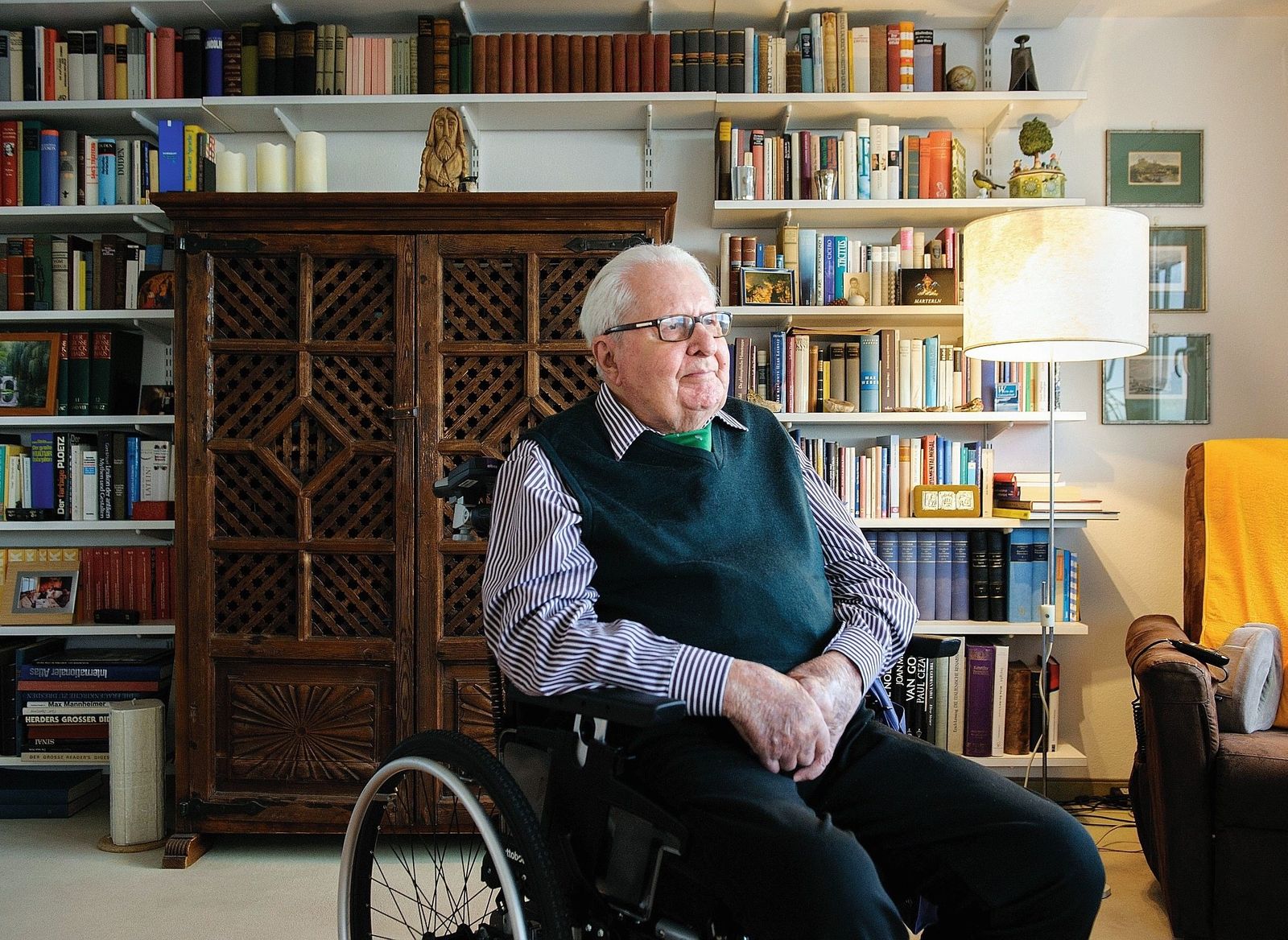 Former German government minister Hans-Jochen Vogel in his apartment in a retirement home in Munich: "I've never experienced anything like this before." 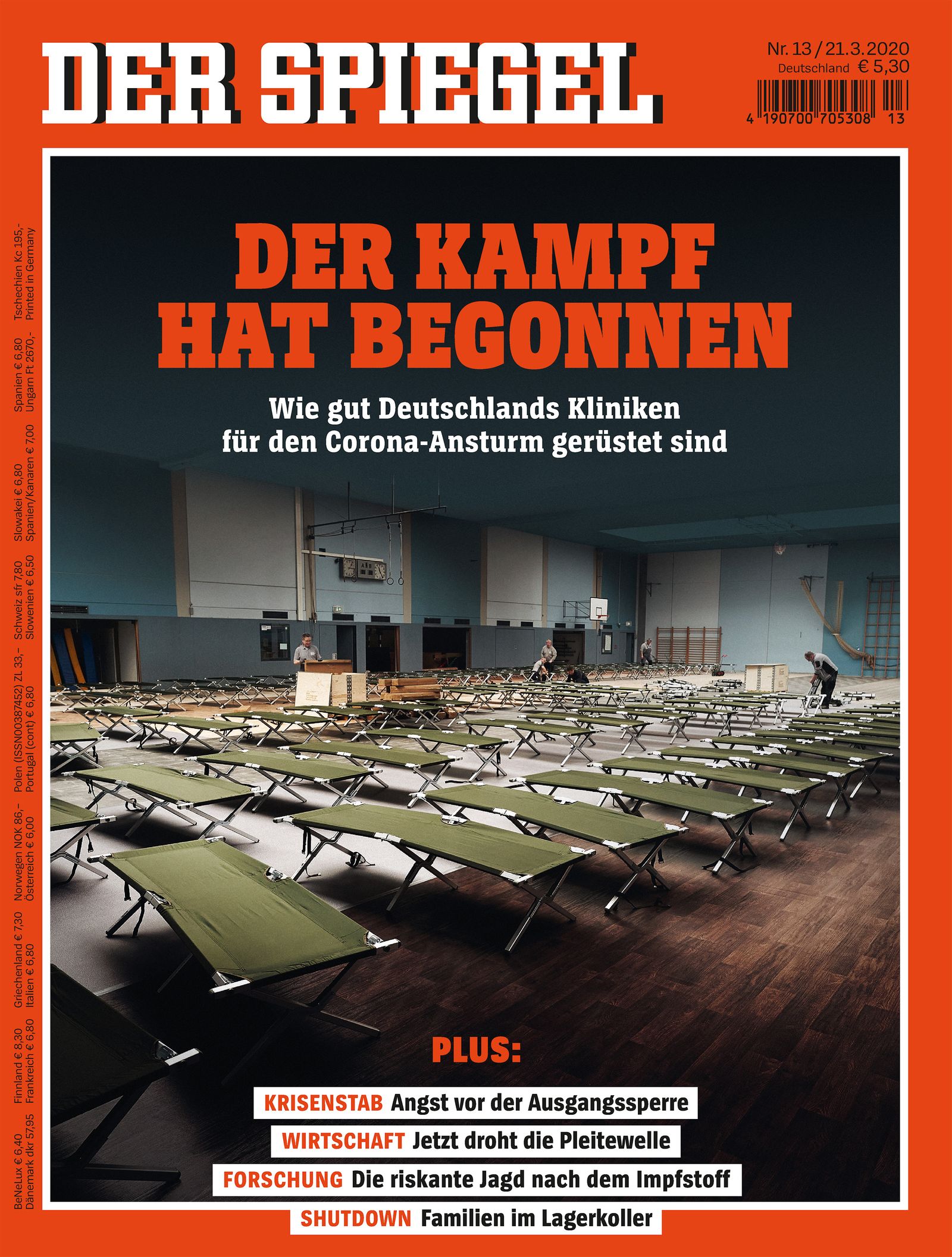