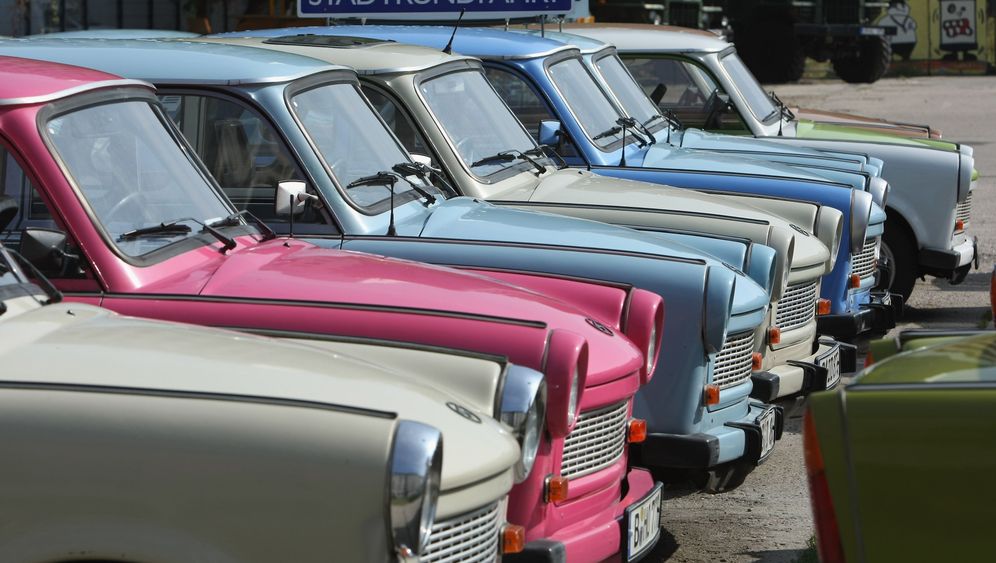 When Wolfgang Thierse, a parliamentarian who grew up in the former East Germany, spoke in the Bundestag for the first time, he asked his fellow lawmakers to be patient with eastern Germans: "We need time and support to acquire independence and personal responsibility, and to overcome the paralysis caused by total control."

Today, more than 22 years later, a request for patience in the parliament would seem curious. The cameras would pan to the chancellor, who is from the eastern state of Brandenburg and pushed aside a number of rivals from West Germany on her way to the top. Commentators could point to the German president, who is from the eastern region of Mecklenburg, and who is helping Germans forget his two failed predecessors, both from the west.

The sentence Thierse uttered in 1990 has lost its subject. There is no longer a "we" for whom anyone has to ask for sympathy and understanding.

Goodbyes are in the offing. Thierse, who once referred to himself as the "East Germans' big mouth," was long the president and then the vice-president of the Bundestag. Matthias Platzeck, who was an interpreter of sorts in domestic German debates and, according to polls, the most popular eastern politician, stepped down this week as governor of Brandenburg. The solidarity pact, which steered money eastwards for the costly project of developing former East Germany, is expiring. The only disputed issue remains whether the so-called solidarity tax should be abolished or whether the money should be used in the future for development programs throughout Germany.

The Concept of Eastern Germany

Years ago, the demise of the German Democratic Republic (GDR) -- as East Germany was formally known -- and German reunification prompted Germans to reflect on how much or how little an impact the communist state had made on Germany. Jens Reich, a former Green Party candidate for the office of president, once said that there was more of an East German identity after the end of the GDR than during its actual existence. Many East German citizens yearned for the big, wide world of the West, and yet they were afraid of losing the small, manageable country in which they had learned to live.

Many Germans did not see their everyday experiences reflected in the heated debates over the "second German dictatorship" and the "rogue regime." Eastern Germany as a concept, and as a new identity, developed in that tense environment. A sense of cohesiveness emerged in the east that defiantly defended the achievements of East Germans, even though it was consistently interpreted in political discourse as a defense of the system. In contrast, the geographic term "eastern German" enabled people to acknowledge their origins while simultaneously disassociating themselves with political and ideological categories or preconceptions. Eastern Germany was no longer the GDR, but it wasn't the Federal Republic yet, either. The term reflected an unfulfilled desire for autonomy on the path to reunification. Those who no longer saw themselves as GDR citizens but not yet as citizens of the Federal Republic were simply eastern German. Eastern German meant autonomy without separatism. It was a transitional identity of sorts, and on the political stage it was articulated by Thierse and Regine Hildebrandt, who died in 2001 (both members of the center-left Social Democratic Party), as well as by Left Party politician Gregor Gysi. When his Party of Democratic Socialism (PDS, the forerunner of the Left Party), simply printed the word "We" on posters in an election campaign, there was no need to explain what "We" meant.

Richard Schröder's contribution was to search for a standard to evaluate "inner unity." The philosopher, who lives in Brandenburg, made a case for comparing Germany to other parts of Europe, such as Belgium, with its problems with separatist tendencies, or Italy and its separatist Northern League. Compared to those two countries, Schröder argued, Germany was a very strong entity. But those Germans who were nostalgic for the GDR were more media-savvy than those who had found their place in a united Germany. Nevertheless, the latter group grew and continues to grow. The term eastern Germany still suggested an eastern homogeneity and eastern conformity of interests when they were already long gone.

Today there is no question that the challenges Germany faces rarely or never have anything to do with the labels East and West. In terms of fiscal policy, Saxony has more in common with Bavaria than with the northeastern state of Mecklenburg-Western Pomerania. And the industrial Ruhr region needs a solidarity pact as badly today as eastern Germany did in 1990. Parts of Lower Saxony and the region of Ostvorpommern in the far northeast have similar problems with rural flight.

The conference of eastern governors -- a political assembly that has existed since reunification -- has become irrelevant. When the heads of Germany's eastern states met this April, one of the main topics of discussion was the 500th anniversary of the Reformation in 2017, an "event with international standing," as was officially noted. In the first years after reunification, governors like Brandenburg's Manfred Stolpe and Saxony's Kurt Biedenkopf doubled as representatives of the east, and Platzeck also saw himself in a similar role. The others are simply governors, who no longer feel it is necessary to continue demanding billions in aid, solely for the development of their states, which have now been part of united Germany for well over two decades.

Within the foreseeable future, the largest special agency devoted to the east that features the GDR in its name could also be shut down. The Office of the Federal Commissioner for the Files of the State Security Service of the Former GDR is to be eliminated and its files transferred to the federal archive. More than 20 years after the demise of the GDR, the screenings of public servants for possible past connections to the former East German security service, or Stasi, have essentially come to an end. The acts of looking back and making reference to the GDR are losing their relevance.

In her unexcitable way, Chancellor Angela Merkel has helped remove the hysteria factor from the subject of the GDR. She has reacted drily to supposed revelations about her East German past. Oh yes, she says, she probably was a member of the Society German-Soviet Friendship. She also had a nice a childhood in the GDR, she adds. There is even something East German about the recurring accusation that she stifles contentious debates with her GDR-influenced yearning for consensus, as if the government were in charge of debates in a democratic country.

In early election campaigns, candidates prominently announced additional gifts for the east (as former Chancellor Gerhard Schröder once said: "Developing the east will be a priority"). After the eastern states suffered flood damage in 2002, Schröder captured the support of those who had been adversely affected and, as a result, won the election. This year, however, the floods -- a quirk of nature -- affected cities in both eastern and western Germany, which then jointly called for federal support.

The 2013 campaign platforms refer to the east with token statements. Merkel's center-right Christian Democratic Union (CDU) and its Bavarian sister party, the Christian Social Union (CSU) wants to "achieve stable and positive economic development in the new states" -- the term "new states" being a reference to the states of former East Germany. The center-left Social Democratic Party (SPD), for its part, claims that it will "not shy away from pressing issues in the eastern German states." SPD chancellor candidate Peer Steinbrück's attempt to tie together Merkel's East German past and her supposedly unemotional European policy seemed somewhat flat, particularly in light of the passion shown by President Joachim Gauck, himself a product of East Germany, for Europe. How could someone who, like Steinbrück, has lived in the west for so long know so little about public relations?

The old eastern German issues have been dealt with. The adjustment of pensions to western German levels is almost complete, and hopefully a uniform minimum wage will clear away some of the absurd differentiation into east and west. Eastern Germany no longer means very much to high-school and university students today. When younger people are asked where they are from, they usually mention the name of a city, a region or a state.

Eastern Germans? Ossis? Nowadays, what sense of cohesiveness is supposed to connect a man from an upscale neighborhood of Potsdam, near Berlin, with someone from Vorpommern, a second-generation recipient of welfare? What up-and-coming writer will want to be called an "eastern German writer" in the future? The east-west logic also contradicts the fact that Gauck is more popular in the west than in the east.

The harmonization of standards of living proclaimed in Germany's constitution remains an ongoing goal. But how that goal is achieved will no longer be subject to east-west criteria. The Left Party also cannot divest itself of this development. Its "eastern wing" no longer functions as a society to defend eastern German roots. Young Left Party politicians haven't been influenced by the GDR in a long time, and they don't try to attract support by highlighting competence on "eastern issues." Sahra Wagenknecht, a former supporter of former East German Communist politician Walter Ulbricht, has completed the step out of the eastern niche more clearly than most. Today she simply behaves as a German, both privately and politically.

When the PDS failed to garner enough votes to enter the Bundestag in 2002, Thierse interpreted it as evidence of progress in internal unity. Perhaps it was a little premature. Protests were the consequence.

However, Thierse's own -- voluntary -- withdrawal in 2013 can be interpreted in that way. At the end of his political career, the powerfully eloquent man addressed the ongoing debate in Berlin over the influence western German Swabians now have over the former East Berlin neighborhood of Prenzlauer Berg. Specifically, the argument centered on which German dialect should be used when referring to a bread roll.

That too is a sign that the other problems between eastern and western Germany can't be that significant anymore.