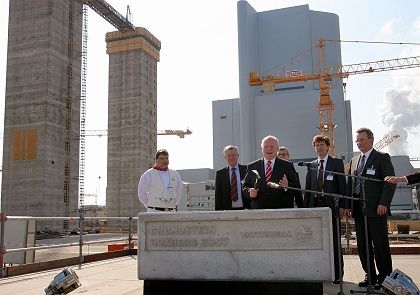 This plant in Boxburg is the first of three new coal plants that will eventually deliver 1900 megawatts of energy, derived from 50,000 tons of coal a day. environmentalists say the costs are too high.

But as a regional politician, the member of the Christian Democrat Union (CDU) must soon rubber stamp a building permit from energy company Vattenfall AB that directly contradicts these goals. Vattenfall wants to build two coal-burning power plants with a total capacity of more than 1,600 megawatts in the Hanseatic city's port. Conveniently located for the delivery of Russian black coal by large cargo ships, the Moorburg plant would be one of the most modern power plants in Europe.

Vattenfall expects the plant to connect to the electricity grid in 2012. Then, about seven million tons of carbon dioxide will pour from the smokestacks every yearabout 40 percent of Hamburg's current level of carbon dioxide emissions from industry, households and power plants. "This is a capitulation of climate policy," complains Fritz Vahrenholt, Hamburg's former environment senator, who has since entered the wind power business.

Beust is not the only one caught in such a predicament. German energy policy is caught on the horns of a dilemma. Chancellor Merkel does not want to scuttle the negotiated elimination of nuclear energy. But at the same time, she insisted during an energy summit in early July that Germany must reduce its CO2 output by 40 percent by 2020.

Phasing out nuclear energy, however, will require the substitution of 20 gigawatts of electricity production, says Peter Poppe, a Vattenfall spokesman. An additional 20 gigawatts will be necessary, he adds, as obsolete coal-burning, natural gas or oil-burning power plants go offline.

While politicians like Economic Minister Michael Glos and Environment Minister Sigmar Gabriel debate how they'll fill the gap, energy companies are already taking action. Unable to rely on nuclear energy and skeptical of the potential capacity of alternative energy sources, they have chosen instead to go retro. From cities like Stade in northern Germany to Karlsruhe in the south, power companies want to both build 30 new coal-burning power plants and modernize several older plants, even though brown and black coal are the worst energy sources in terms of pollutants, accounting for about 40 percent of CO2.

If the power companies succeed, this share will soon increase in Germany. A technological device that filters CO2 from emissions is still a long way from large-scale production. "A reliable energy mix cannot be guaranteed without further construction of coal-burning power plants," says Werner Brinker, CEO of energy company EWE AG in Oldenburg. Neither petroleum ("crisis-prone"), nor natural gas from Russia ("politically risky") or uranium ("limited availability") can replace coal, Brinker says.

And there is plenty of coal. Known deposits global will probably last for 220 years at current consumption levels. Coal is also cheap and more evenly distributed than petroleum throughout the world.

As nuclear plants are phased out, something has to fill the gap. Politicians are pushing coal -- to the dismay of NIMBY activists and environmentalists.

German Environment Minister Gabriel has a weak spot for coal: He sees it as a guarantee that there will be adequate fuel for economic growth after nuclear energy is phased out in 2020. Critics complain that as an ambitious member of the Social Democrat Party (SPD), Gabriel sides with the SPD supporters in the state of North Rhine-Westphalia, who care more about jobs in the struggling mining sector than the environment. "Gabriel is a coal politician and caught in the climate trap himself," says Jürgen Resch, the director of Deutsche Umwelthilfe, a German non-profit association devoted to environmental protection. Stavros Dimas, European Commissioner for the Environment, recently warned against constructing new power plants as long as reliable CO2 disposal remains elusive.

Still, Gabriel turned away Greenpeace demonstrators who were protesting in front of the chancellery earlier this month: "We need these power plants." It is only a question of nine new plants, he added.

The Federal Environment Agency (UBA), which Gabriel oversees, has come up with different data. According to a new study on coal, the Federal Network Agency for Electricity, Gas, Telecommunications, Post and Railway has received at least 45 applications for the construction of new plants or the conversion of existing ones. In one analysis, the UBA concludes that if built, these plants would keep Germany from achieving its own climate protection goals.

In Bremen, the proposed construction of a coal-burning plant became the most sensitive aspect of the negotiations over a governing coalition between the SPD and the Green Party. While the Social Democrats are mainly worried about investments and jobs, the ecologically-motivated Green Party wants to prevent the construction of the plant. In order to form the coalition, the parties temporarily shelved the issue.

Jobs vs. the Environment

But the employees of the Bremen Public Services (SWB) dont want to simply sit back and watch the political poker game. Several hundred employees recently marched noisily into the city center, carrying banners ablaze with the number 500, the number of jobs at risk if the project falls through. 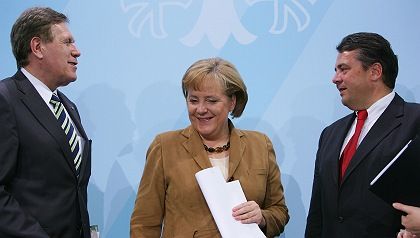 BERLIN - JULY 03: German Chancellor Angela Merkel and Economy Minister Michael Glos after an energy summit in July. Merkel is struggling to find a way to phase out nuclear power by 2020 -- without introducing something even more environmentally damaging.

Admittedly, the city-state is hardly in a position to prevent the construction of the plant, even if it will ruin Bremen's CO2 balance for decades. The application must be approved by federal law. The government of Bremen must only approve the withdrawal of water from the Weser River for cooling purposes, and it could drag its feet for a while.

Essent NV, the Netherlands largest electricity provider, has been SWB's largest shareholder since 2000. Now the Dutch firm wants to significantly expand its capacity in Germany. It is hardly surprising that SWB has chosen to focus solely on coal, the cheapest form of energy, to make it more competitive. Only a third of the electricity the company plans to produce in the new plant will be sold Bremen; the majority will flow to customers elsewhere in Germany.

Essent hopes to merge with the number two electricity provider in the Netherlands, the Amsterdam-based company Nuon, which is currently pushing its way onto the German market with advertising campaigns like "Yummy Electricity" ("Lekker Strom"). Nuon is also wooing customers away from German providers by offering "nuclear-free electricity" at attractive rateselectricity that will be produced in coal-burning power plants in the future.

The companies are particularly attracted to locations along the coast, because they provide a variety of transport options. The firms plan to build plants not just in Hamburg or Bremen, but also in Kiel, Stade and Brunsbüttel on the other side of the Elbe River (see graphic).

Lower Saxonys economic minister Walter Hirche, who is a member of the business-friendly Free Democrat Party (FDP), sees mainly the positive aspects of the coastal construction boom triggered by the electricity providers. Being by the sea is an advantage of location, he believes, one that increases the likelihood of major investments and enhances job creation.

Of course, local residents are not always pleased. Resistance is developing even in Lower Saxony's conservative Emsland district, where the Christian Democrat Union (CDU) sometimes gets as much as 70 percent of the vote in regional elections. The district has been buzzing ever since early June, when the Swiss company BKW FMB Energy Ltd. announced plans to construct a 900 megawatt power plant with a 150-meter (492-foot) cooling tower by 2013. The Green Party, which is otherwise hardly noticed in the area, managed to collect more than 2,500 signatures in just a few days.

Nikolaus Schütte zur Wick, the Green Partys leader in the district assembly, is optimistic that the construction plans could be stopped. "There will be regional elections in Lower Saxony in early 2008. I don't think the CDU will push through the project against the will of the residents."

The city council of Wiesbaden has demanded a moratorium on the construction of a coal-burning power plant in the neighboring city of Mainz. Forty-nine professorsincluding Paul Crutzen, a Nobel Prize-winning chemist from Mainz-are protesting against the pollutant-belching power plant.

Many scientists are also distrustful of the electricity industry, which has promised that the old technology will be modernized and that carbon dioxide will be filtered out of emissions and deposited in the sea or in mining shafts in the future.

But so-called Carbon Capture and Storage (CCS) technology is not just expensive -- it won't be ready for mass-production until 2020 at the earliest. Vattenfall is building the world's first pilot power plant with CO2 filtering capabilities in the German state of Brandenburg, but it only has the capacity of a large wind power plant.

The CO2 will be pumped some 800 meters into the ground. Beginning this fall, research will be conducted into how the gas behaves underground. Russian natural gas was already deposited for decades beneath the rock layers under the town of Ketzin. But the carbon dioxide could dangerous if it leaks. When CO2 saturates the breathing air by more than five percent, it becomes difficult for humans to survive. From eight percent onward, the invisible poison causes certain death.