Far from the constraints of Berlin's political scene, Peter Altmaier wants to talk frankly about Europe. He wants to talk about his ideas for a European economic government, and about a Europe that needs to weather future crises more effectively and needs new contractual underpinnings. He also wants to discuss his conviction that modifying European Union treaties would send a strong signal to the markets, namely that Europe is sparing no effort to defend its currency.

But the columnists from the Economist, Independent and Financial Times aren't interested in Altmaier's mission at the moment. Instead, they have questions about the current situation. "President Barroso supports euro bonds. What is Chancellor Merkel's position?"

It is Wednesday of last week. Altmaier is pushing a glass of Chilean red wine back and forth in front of him. He is a guest at the Royal Over-Seas League, a club in downtown London steeped in tradition. A chandelier hangs from the ceiling, thick carpets muffle the steps of waiters and oil paintings on the walls depict highly decorated admirals.

The small group of handpicked journalists and experts on Europe are waiting anxiously for Altmaier, a close ally of the German chancellor, to answer their questions. They want to know where Germany stands in the euro crisis. Even in the elegant conference rooms of downtown London, Altmaier cannot escape Berlin's everyday political realities.

When he became the first parliamentary secretary for Merkel's Christian Democrats two years ago, Altmaier was unknown, even to many in Berlin political circles. Until then, he had served as a state secretary at the Interior Ministry, led at the time by Wolfgang Schäuble, who is now finance minister. If he was known at all, it was as a proponent of a coalition between the CDU and the Green Party. Today he is one of the most powerful conservatives in parliament and has even acquired international standing. His rise to prominence has thoroughly shaken up the power structure surrounding Chancellor Angela Merkel.

The job of parliamentary secretary isn't usually one that politicians are eager to take. The work is important, but not particularly sensational. The so-called "First PGF" must work together with his counterparts from other parliamentary groups to ensure that parliamentary operations proceed without a hitch. His job includes determining how much speaking time is allotted to each party and what the agenda looks like. Most of all, however, a parliamentary secretary ensures that his party's majority is not endangered. He spends more of his time in the engine room than on the sundeck.

This, though, is precisely what now makes Altmaier such an important gear in the chancellor's power machinery. He has to ensure, for example, that the conservatives -- both the CDU and its sister party, the Christian Social Union -- and their coalition partner, the liberal Free Democratic Party (FDP), achieve a majority for the crucial vote on the expansion of the European Financial Stability Facility, a vote currently scheduled for September 29.

More importantly, however, Altmaier has spent the summer becoming the face and voice of Merkel's efforts to save the euro. When Economics Minister and Vice Chancellor Philipp Rösler brought an organized Greek insolvency into play last week, Altmaier was the first CDU politician to make the FDP chairman come to his senses.

Inquiries by the Minute

For months, Altmaier has been called upon to defend, explain and describe the government's policies on euro bonds, the crisis in Italy and European Central Bank bond purchases in the media. He isn't well suited for the job. Altmaier, 53, a large man and the son of a miner from the western state of Saarland, is not the least bit telegenic. Besides, it isn't his responsibility to do the administration's PR work.

"We were receiving inquiries by the minute this summer," says Altmaier. He is sitting in his Berlin office, with a view of the Spree River and the Reichstag building.

He has removed his jacket and is rubbing his eyes. He just spent a long evening entertaining Environment Minister Norbert Röttgen, a close friend and his predecessor as parliamentary secretary. Like Röttgen, Altmaier wants to lead the CDU into the modern age of the middle class, attract more urban voters and explore the possibility of coalitions with the Green Party.

Many within the CDU/CSU are not fond of the position, but Altmaier doesn't come across as a provocateur. "I don't scare CDU voters," he says.

When it comes to Europe's common currency, Altmaier has also stuck to his guns. In the midst of the euro rescue debate, he has countered the devastating reports coming out of countries like Greece and Italy with an enthusiastic appeal for a stronger Europe. Altmaier once served as an official with the European Commission.

Emerging onto the Sun Deck

He is opposed to euro bonds, but not indefinitely; this sets off alarm bells for some in the CDU. Out of deference to the independence of the European Central Bank, he is unwilling to criticize its purchases of government bonds, even though countless CDU/CSU politicians have long been sharply critical of the policy. Altmaier's views are reasonable, but they are not popular. He is good at explaining things, which is why the television networks like him. As a result, he sometimes manages to emerge onto the sundeck, after all.

Still, Altmaier's increasing power has other, more tangible reasons. For years, he has been one of Merkel's closest advisors, part of a group of hardworking and, most importantly, discreet lawyers the chancellor has assembled. It includes Chancellery Chief of Staff Ronald Pofalla, advisor Eckart von Klaeden, CDU General Secretary Hermann Gröhe and Altmaier.

Parliamentary group leader Volker Kauder takes a laissez-faire approach to Altmaier. Unlike his predecessor Röttgen, who would have liked to replace Kauder after the 2009 election, Altmaier has a relaxed relationship with his boss. Kauder feels that he is loyal, and because he doesn't like to give TV and radio interviews himself, he is only too pleased to allow Altmaier to step in.

Altmaier is also given free rein on the terrain of the CDU general secretary. It was a matter of course that he would attend the first meeting of CDU leaders last Thursday to work on the main motion on Europe for the party convention. Altmaier has clear ideas about what belongs in the document. He wants an economic government with teeth and a European Court of Justice that could strike down national budgets if necessary should they veer too far into the red.

Resistance to the Idea

Altmaier is shaping himself into Merkel's universal weapon. At the behest of the chancellor, he is increasingly taking on delicate missions to the FDP, which are actually the responsibility of the head of the Chancellery. When feelings were running high in a dispute with the justice minister over preventive detention, the affable Altmaier was brought into mediate.

Merkel now hopes that his powers of persuasion will help her achieve a majority for the euro bailout fund next week. Altmaier loses no opportunity to promote the European Financial Stability Facility (EFSF). During a recent break at a meeting of the parliamentary leadership, he collared Philipp Missfelder, the chairman of the CDU youth organization, and Marco Wanderwitz, another young conservative, both of whom are euro skeptics. "He's pretty keen on the euro," one of the two men said after the brainwashing session.

Even members of parliament who are on the other side of the euro question admire Altmaier for his professionalism. Wolfgang Bosbach, an old CDU warhorse who entered the Bundestag with Altmaier in 1994, has already decided to vote against the expansion of the bailout fund. Nevertheless, he said: "I appreciate his endearing tenacity." Even the CSU, which finds Altmaier's enthusiasm about Europe suspect, is surprisingly conciliatory. "He's easy to get along with," says Stefan Müller, the parliamentary leader of the CSU national committee in the Bundestag. "But by CSU standards, his political ideas are often hard to stomach."

Still, the CSU ought to be pleased with Altmaier's response to the journalists' question in London. Euro bonds, he said, are "not feasible in the short and medium term," adding that this is partly because there is too much resistance to the idea in Germany. 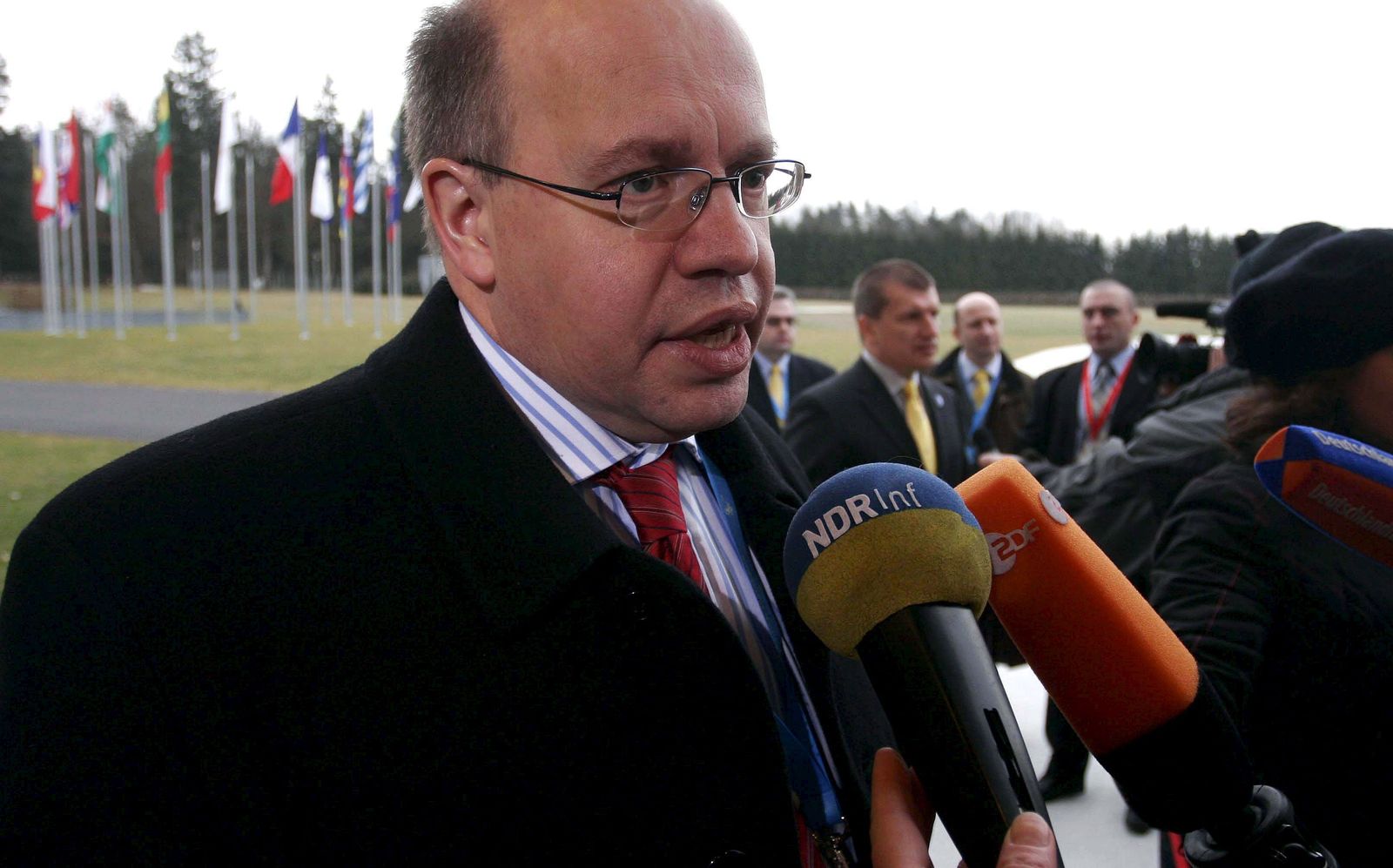 Peter Altmaier has become a leading voice when it comes to Germany's position on the European common currency.