The German Federal Prosecutor's Office last Thursday applied for an arrest warrant for Mevlüt K., a 30-year-old Turkish man, on charges of supporting a terrorist group in Germany, SPIEGEL has learned. 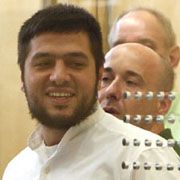 Atilla Selek (left), one of three men suspected of belonging to a radical Islamist terror cell that plotted attacks on targets in Germany, has told German police that a Turkish man, Mevlüt K., supplied the detonators.

He is suspected of having helped the four members of the so-called "Sauerland cell" to get 26 detonators into Germany for a planned series of attacks on targets there. The suspicion is partly based on a statement made by one of the defendants, Atilla Selek, to officers from the Federal Criminal Police Office. Selek said he "couldn't have done it" without Mevlüt K.'s help.

Mevlüt K., who lived in the southwestern German town of Ludwigshafen until 2002, had built up a network of Islamic militants in Germany and the Balkans, according to German police. There have been several criminal investigations running against him on suspicion of terrorism in recent years.

Acoording to Selek, Mevlüt K. was a contact man in Istanbul for Islamists who wanted to fight in Chechnya. Selek also said that Mevlüt K. claimed to have worked with Abu Musab al-Zarqawi, the al-Qaida leader in Iraq who was killed in 2006. But K. was also an informant for the Turkish intelligence service, as SPIEGEL reported earlier this year.

Investigators believe he is still in Turkey. Selek met K. in Istanbul and was impressed by his inside knowledge that he had obviously gained from government sources. Mevlüt K. did "really dangerous things" with intelligence agencies, Selek said in his statement.