When his contact people in the western German cities of Ludwigshafen and Bad Harzburg spoke about him, they were always deferential and full of respect. They called him "chief" or "the boss man," and they only exchanged his telephone number in code, masked as lottery numbers. If there was something that needed to be discussed urgently, they would fly to see him in "the city with the I," as Ahmed H., a 27-year-old of Somali origin who has been living in Germany since 1990, called it. 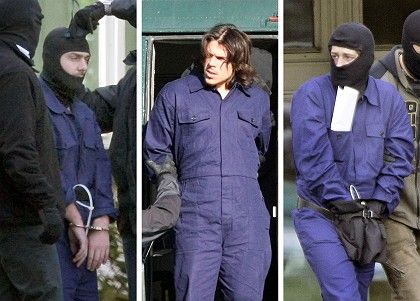 Suspects from Germany's Sauerland Group terror cell are set to go on trial on Wednesday in Düsseldorf.

The "chief" is Mevlüt K., a 30-year-old Turkish citizen born in the German city of Ludwigshafen, who most recently worked as a welder. In August 2002, he left Germany because the Federal Criminal Office of Criminal Investigation (BKA) was closing in on him. Officials here believe he was the leader of a German terror cell that had direct contact with Abu Musab al-Zarqawi, the later leader of al-Qaida in Iraq.

The "City with the I" is Istanbul, where K. resides. He allegedly uses the city as his base to remotely run an entire network of radical Islamists in Germany. The group is also believed to include Ahmed H., who also lived in Ludwigshafen, and a group of Serbian brothers -- Bekim and Blerim T. as well as Dzavid and Nedzad B., all from the town of Bad Harzburg.

When the mammoth trial against the so-called Sauerland Group begins in Düsseldorf's Higher Regional Court on Wednesday, it will also have to address Mevlüt K.'s Balkans connections. Investigators now believe he played a more key role in the cell than previously thought. BKA investigators have concluded that he was responsible for acquiring 26 military detonators.

"Under K.'s direction, six detonators were obtained from Kosovo and 20 detonators from Turkey were smuggled into Germany," a BKA report states.

That makes K. the fifth man. But K. won't be sitting in the dock when the trial of terror suspects Fritz Gelowicz, Daniel Schneider, Adam Yilmaz and Attila Selek begins this week. A half dozen suspected helpers have also been detained under the orders of Germany's federal prosecutor. So far, though, they have been unable to catch K.

An investigation has been opened into the man, and German authorities have also requested legal aid from Turkish officials. Turkish police arrested K. and detained him for several months when he entered the country in 2002, but afterwards they allowed him to move about with astonishing freedom. That could be because of his side job.

Several German security officials claim that K. was not only working for jihad, but also as an informant for the Turkish secret service, which shared K.'s insider information with the CIA. Thus, the Düsseldorf court will also have to address the issue of whether K. obtained the detonators on behalf of officials or whether they knew about what he was doing as well as the question of how deeply intelligence officials infiltrated the people surrounding the Islamic Jihad Union, the terror group that Germany's federal prosecutor believes Gelowicz and Co. were members of. Without K.'s support would the accused even have been able to start building bombs? According to Manfred Gnidjic, a lawyer representing Attila Selek in the defense at the trial, "those are decisive questions that the court must urgently clear up."

In fact, the German terror cell did require assistance in obtaining the detonators. According to BKA officials, Selek, who went back to Turkey in February 2007, approached a certain "Sut," a man investigators believe is Mevlüt K.

K. was able to help, too. He activated his network in Germany and the Balkans from his base in Turkey -- a surprising bycatch for investigators. According to the investigators' file, he activated at least 10 people in the next few weeks. Three are now under investigation in Germany by criminal investigators in the state of Lower-Saxony. Serbian authorities also have K.'s Balkans connections on the radar.

A BKA report alleges that a relative of Nedzad and Dzavid B. travelled by bus on July 23, 2007 to Germany from Kosovo. They allege he carried six explosives detonators made in Serbia and Bulgaria in his luggage. Eleven days later Ahmed H., a confidant of K., allegedly delivered the detonators to Gelowicz in Mannheim. But the delivery apparently wasn't enough. He communicated with Selek using a shared e-mail account he wrote: "A little bit more would be good."

Mevlüt K. had already arranged for a second and larger ration though. Investigators believe it was K. himself who hand-delivered the detonators in a plastic bag in an Istanbul mosque to a then 15-year-old German-Tunisian boy from Wolfsburg. The young man would later serve as a witness in the case. The contents of the bag included a pair of "Spice" brand shoes. Czech detonators had been hidden in the soles. The boy was paid €100 and he took a bus back to Germany, where he is believed to have turned over the detonators to Gelowicz on August 26 in the city of Braunschweig.

During arrests of three of the suspects in the terror cell in the town of Oberschledorn in the Sauerland region in the western state North-Rhine Westphalia on Sept. 4, 2007, all 26 detonators were recovered by police in a rental car. BKA specialists later tested them and found that only three were fully functional -- the rest had gotten moist or were unsuitable for the purpose. Was it a coincidence that they didn't work or a security measure on the part of informant K.'s minders? In any case, says one shaken German investigator, "Three would have been enough."