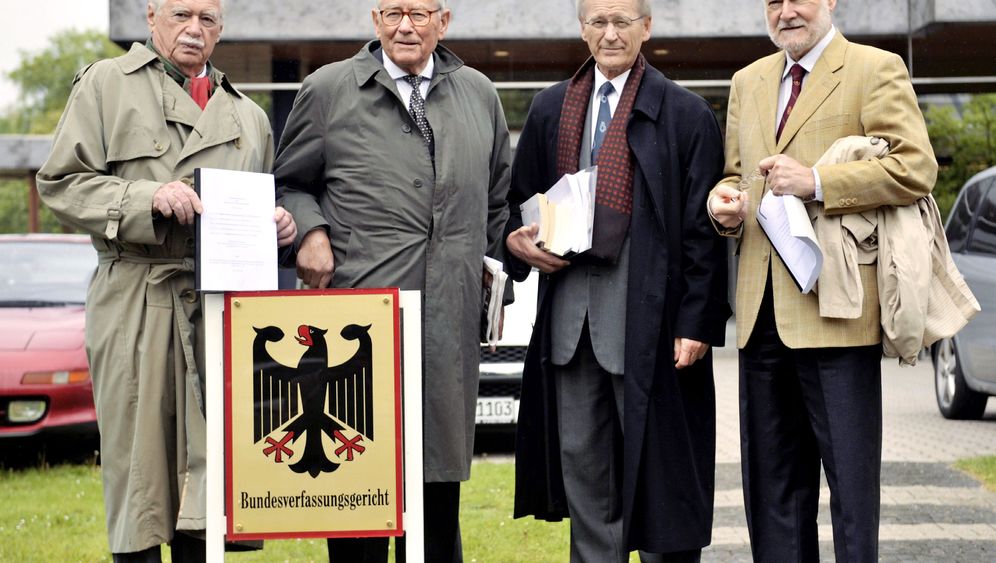 Photo Gallery: Return of the Antichrists

Wilhelm Hankel is sitting on the stage at a meeting of the Kiel Institute for the World Economy. He is beaming with joy. The 81-year-old professor has just explained why the euro has always been a monstrosity, and why it will and must fail. Although the current plans to "get a living corpse to walk" are touching, he scoffed, one thing is already clear: The euro bailout package will only save the banks.

Surprisingly enough, his presentation was met with long and enthusiastic applause from his audience of economists. For Hankel, it was about time. The recalcitrant professor has been waiting for what has seemed like an eternity for this recognition. Since Jan. 12, 1998, to be precise.

It was on that day Hankel drove to Karlsruhe in southwestern Germany, together with constitutional law expert Karl Albrecht Schachtschneider and economists Joachim Starbatty and Wilhelm Nölling. At the German Federal Constitutional Court, which is located in Karlsruhe, the four professors dropped off a 352-page brief that would change their lives. It was a complaint against the introduction of the euro. They didn't want this new currency. They wanted to keep their old Federal Republic of Germany, as post-war Germany is officially known, and its German mark.

Nothing was the same again after that. Suddenly they stopped getting invited to conferences. Newspapers were reluctant to print their opinion pieces. Political allies distanced themselves from the four men. "We were the Antichrists," says Hankel, describing the mood at the time.

'Idiot Savants with No Sense of History'

With the exception of a small group of people, hardly anyone agreed with them. The four men argued that the euro could not remain stable, because the economies of the participating countries were too disparate and the control mechanisms too lax. This would jeopardize German price stability and affluence. Besides, they argued, a political union had to precede a monetary union.

When the court in Karlsruhe dismissed their suit, they became the objects of malicious insults. Former Chancellor Helmut Schmidt, a member of the center-left Social Democratic Party (SPD), called them "idiot savants with no sense of history." It was an insult Hankel would never forget. After all, Hankel himself was a former close colleague of the legendary German Economics Minister Karl Schiller, who also belonged to the SPD, as well as being the former head of the Landesbank in the state of Hesse. He had also taught at Harvard and Georgetown University, among other institutions.

"For 10 years I was practically barred from writing articles," Hankel complains. He was so marginalized that only right-wing publications like the controversial weekly magazine Junge Freiheit would publish his writing, a circumstance he characterizes today as an act of self-defense.

The four professors, already viewed with suspicion by the public, were marginalized even further by such lapses, so much so that they came to be associated with German nationalism.

Although their views haven't changed, the world around them has. Now that the European single currency is in fact crumbling, the opinions of these opponents of the euro are in demand once again. And quietly enjoying their victory isn't in the nature of these four men.

The contrary professors got together again, and Schachtschneider, the legal expert, spent two weeks drafting a new complaint. This time it was directed against the bailout package for Greece. Then the four elderly gentlemen made another trip to Karlsruhe. On May 7, after the German parliament, the Bundestag, had passed legislation to approve the financial bailout plan, they submitted their constitutional complaint, together with a request for a temporary court injunction that would prevent then-German President Horst Köhler from signing the aid bill into law before the Constitutional Court could consider their complaint.

A few days later, an ad appeared in the respected center-right daily Frankfurter Allgemeine Zeitung. It was paid for by Dieter Spethmann, the former CEO of the giant German industrial conglomerate Thyssen, who had since joined the group. The copy read: "As was once the case before the outbreak of the French Revolution, Europe's politicians have now lost any sense for the rights, concerns and expectations of their citizens."

It was a call for mutiny, the goal being to encourage citizens to fight back against politicians who had knowingly violated the "no bailout" clause in the Maastricht Treaty, which prohibits an EU member state from financially assisting another member state. The professors argued that violating this clause would turn the monetary union into a bailout and debt community.

The fact that the major euro emergency rescue package was approved in a mad rush in the night of May 10, at the Brussels crisis summit, only reinforced their arguments. Starbatty calls it an "outrageous" rush job. "Even a rabbit-breeding club has to submit its agenda items two weeks before a meeting, so that the members can be prepared," he says.

Starbatty is sitting on a hill on the west coast of the Peloponnese peninsula in Greece, gazing out at the sea. Ironically, he chose Greece as a place to spend a few days relaxing before facing the stress of speeches and interviews at home.

The retired professor, who taught economics at the University of Tübingen in southern Germany for decades, says he loves Greece. But does the country love him? A Greek television crew was waiting for him when he arrived at the airport. Why was he filing a complaint against the Greek bailout, the interviewer asked? Greek citizens aren't about to see any of the money, Starbatty explained, because it will be used to pay off loans to the banks. This, he argued, is not the way to clean up the country's financial problems.

Starbatty who enjoys such debates, quickly got to his point. The only approach that makes sense, he said, is for Greece to reintroduce the drachma and then devalue it, because this would make the country's goods and services competitive once again. At the same time, he said, a debt relief conference would have to be convened. "The banks that traded in Greek bonds should also carry the risk."

Merkel 'Does Not Have a Good Grasp of the Issue'

Starbatty, who for years has been chairman of the Social Market Economy Action Group (ASM), which is generally considered to be neoliberal, believes in the power of the free market. As the quartet's avid economic liberal, he is horrified by political intervention in the economy and relentlessly raves against what he calls "the Brussels planned economy."

However, he has only limited faith in German institutions and their independence, ever since the following sentence appeared in the German Bundesbank's largely devastating expert opinion on the introduction of the euro: "After weighing up the existing problems and risks, the entry into the monetary union beginning in 1999 seems justifiable in terms of stability policy."

Starbatty is now playing a more active role in the group's second assault on the euro. During his vacation, he is trying to meet with Greek cabinet ministers in an effort to encourage the country to voluntarily withdraw from the monetary union. The chancellor, says Starbatty, is of no help in this regard. "Angela Merkel simply does not have a good grasp of the issue."

Nölling, another member of the group filing the complaint, gets emotional when the subject of the administration's role is raised. He criticizes Berlin for demanding solidarity with Europe while demonstrating no solidarity whatsoever with its people. Hundreds of billions of euros are being destroyed in Germany "because the country has taken on the role of the monetary union's paymaster," Nölling says. "In violation of all laws, we are being forced to rescue a currency that cannot be saved."

Nölling was already known for his sharp tongue during his time as a member of the Bundestag for the SPD, as finance minister for the city-state of Hamburg and as president of Hamburg's state central bank. After growing up as the son of a poor forestry worker, it pains him to look on as hard-won social benefits are scaled back so that taxpayer money can be spent on bailouts. The 76-year-old, who lives with his family on an idyllic farm in Grönwohld near Hamburg, is proud of his lambs, his rhubarb and his rooster. A man like Nölling is determined to protect the things he has achieved.

Carrying the Torch of Justice

His comrade-in-arms, Karl Schachtschneider, is motivated by something else. "I want to be someone who carries the torch of justice," the 69-year-old says, with a heavy touch of pathos. The only lawyer among the four, he perceives democracy as the greatest good.

Jürgen Echternach, the former head of the center-right Christian Democratic Union (CDU) in Hamburg, felt the brunt of Schachtschneider's passion when, in 1988, Schachtschneider spearheaded a lawsuit directed against Echternach's undemocratic style of leadership.

The lawyer, who was a professor in Nuremberg until his retirement, says he has nothing against European integration. But he finds it undemocratic that citizens are simply being forced to be part of a community in which one country is required to bail out another. "What is happening here is almost dictatorial," says Schachtschneider.

A Chance of Success?

The court in Karlsruhe dismissed their request for a court injunction against the Greek bailout. But now that the Constitutional Court is reviewing at length whether to consider their complaint, Schachtschneider believes that it stands a chance of succeeding after all. In any event, he intends to publish the 60-page brief as a legal reference book, thereby going down in the history of the anti-euro movement once again. Hankel is against the idea. He would prefer that the group publish a book that is more accessible to the general public, something along the lines of their 1998 book "Die Euro- Klage. Warum die Währungsunion scheitern muss" ("The Euro Suit: Why the Monetary Union Must Fail") or the 2001 work "Die Euro-Illusion" ("The Euro Illusion").

For Hankel, the group's monetary expert, the public's opposition to the "economic illiterates in Berlin and Brussels" is paramount. The 81-year-old tirelessly travels around the country, giving lectures and speaking to every camera he faces. "I will preach from any pulpit," he says.

His sermons are directed against former German President Horst Köhler, whose hand, in Hankel's opinion, should have withered away after he signed the Greek bailout bill into law, and against the European Central Bank, which until recently had a Greek vice president who was supposedly unaware of the chaos in his own country.

Hankel's preferred scenario would be to see Germany withdraw from the monetary union. Then the stronger countries would follow suit, and a new, streamlined euro zone with seven to 10 members would develop. He dreams that Karlsruhe will accept their complaint. "Merely the headline 'Euro on Trial' would spell the end of the currency," he says.

'We Germans Are Not Heroes'

Although the four professors don't appear to stand much of a chance, they are taking advantage of every opportunity they can get, partly because all four now have people listening to what they have to say. Hankel is fighting against a monetary policy that he believes is a burden to the nation, Starbatty is fighting to uphold the rationality of the free market and against incompetence in Brussels, Schachtschneider is fighting for democracy and Nölling for stronger political morals.

Both they and their listeners feel motivated, even if they realize that nothing will change in the end. "Do you think they're going to take to the streets now and protest?" Hankel asks, with a hint of self-irony, after giving a lecture in the northern city of Lübeck.

Not even he is truly convinced that change will occur. "We Germans are small-minded people, not heroes."