Democracies don't die overnight. They don't flourish one day and then get uprooted by a coup d'etat the next. They decay gradually, until the ground is fertile for an authoritarian seizure of power.

And sometimes, like in the German state of Thuringia this week, democratic politicians play an active role in the demise of the very system they represent.

What happened in Thuringia this week -- where a center-right politician was elected governor with the help of the far-right populist Alternative for Germany (AfD) party -- was a milestone for the AfD. It was the first time the party, which has been criticized for being extremist and at times openly anti-Semitic, has helped to elect the leader of a state government.

The election was a sign of the gradual decay of German democracy, even if a worst-case scenario appears to have been averted. Members of German Chancellor Angela Merkel's conservative Christian Democratic Union (CDU) had long refused to engage in any way with the AfD, but in Thuringia, members of the CDU and those of another center-right party, the Free Democrats (FDP), were willing to accept the possibility that one of their candidates would be elected with votes from the AfD. The only thing that slammed the brakes on this madness was when party leaders in Berlin -- eventually -- intervened.

Every new attrition chips away at our democratic system. To stop this, what happened in Thuringia must be seen as a warning shot, a harbinger.

In their book, "How Democracies Die," Harvard political scientists Steven Levitsky and Daniel Ziblatt began with the chapter, "Fateful Alliances." This is how it usually begins, they write: Representatives of the current system ally themselves with its enemies in order to maintain their grip on power. That's how it was in the Weimar Republic, where Hitler wouldn't have stood a chance without an invitation from conservatives. According to Levitsky's and Ziblatt's analysis, this has also been the case in Brazil, Peru and Venezuela.

Democracy is still alive in the U.S., but it has been damaged by the Republicans' alliance with Donald Trump. Many senators are hoping to remain in power with Trump's help, so they follow him unconditionally, even in the face of the blatant lie that he didn't abuse the powers of his office.

The dimensions are considerably smaller in Thuringia, but the principle is the same. Conservative politicians, particularly those in the CDU, have long entertained the idea of using the AfD to gain power. In the recent vote in Thuringia's state parliament, the CDU and the FDP expressed their willingness to enter into an implicit alliance with Höcke and the other right-wing populists. There is no doubt this alliance would have been a fateful one.

Center-right politicians often erroneously believe that their only enemy is on the left. Many in the CDU and FDP certainly see it this way. In order to prevent Bodo Ramelow, the Left Party's incumbent candidate for governor, from re-election, the conservatives sided with a far-right extremist.

In reality, the center-right should be just as concerned about the far-right end of the spectrum, if not more. Germany's Nazi past makes any flirtation with the far-right taboo. The left, on the other hand, is no longer a threat to liberal democracy, and this is especially true for Bodo Ramelow. Höcke, however, is a man who violates this taboo day in and day out.

It's the duty of the CDU and the conservative wing of the FDP to defend democracy and define what decent conservativism is. But if these parties forge alliances with far-right parties, they help to bring extremism into the mainstream. Extremists are then lent an air of respectability, validating their claim that they are respectable conservatives.

In truth, they are nothing if not nefarious. This was shown by Höcke's tactics in Thuringia, where he undercut the very point of an election and forced the members of his parliamentary faction to not vote for the party's own candidate.

The CDU and FDP were all too willing to fall into this trap and must now live with the damage they have caused. Another lesson that history has taught us is that when it comes to playing games, those who act in bad faith have an advantage. Take Donald Trump, for instance, against whose unabashed political brutality Republicans don't stand a chance.

The conservatives of the Weimar Republic thought they could use Hitler. In truth, he was using them. They were in the final stage of democracy's demise without even realizing it. Comparisons like this are inherently imperfect, but it can't hurt to view the current situation as an early phase like the one experienced a century ago. Consider it a precautionary measure.

CDU and FDP politicians in particular should accept this and act responsibly. In the coming election campaigns and parliamentary votes, the only appropriate course of action is complete disassociation from the AfD. 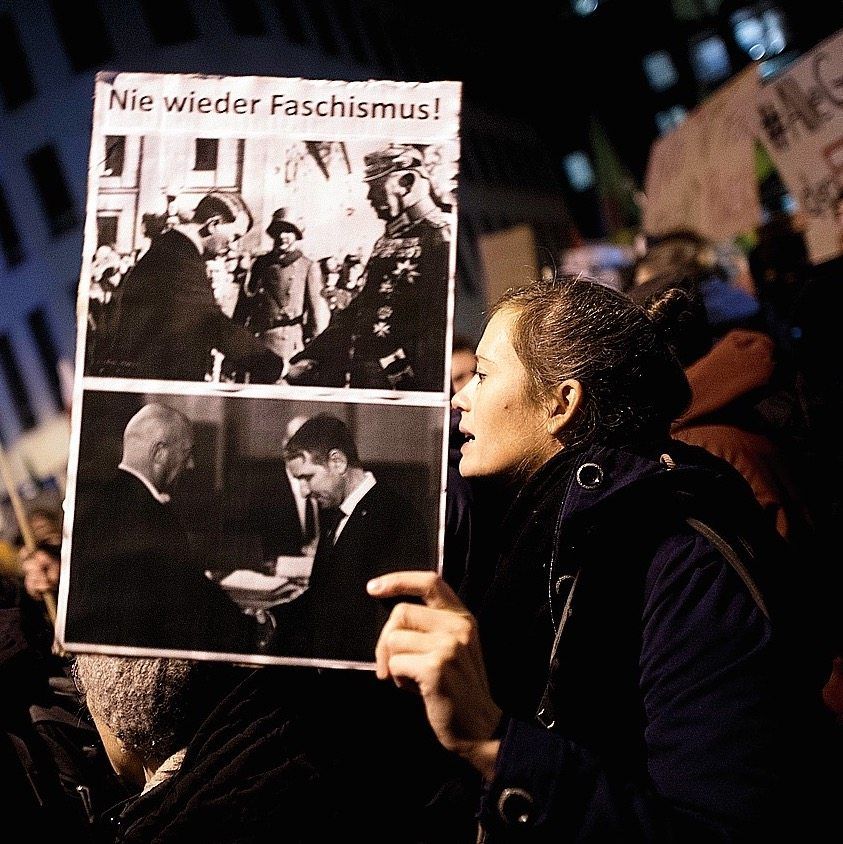 A protester in Germany holds up a sign comparing the recent election in the state of Thuringia to Adolf Hitler's election as chancellor in January 1933.