SPIEGEL: When you saw the news conference in which the opening of the East German border was announced at 18:54 on Nov. 9, what went through your mind?

Jäger: I thought, "what's he going on about?" He's reading something off and doesn't have any idea what the impact's going to be. He himself seemed very surprised at what he was saying, like someone who was reading it for the first time. 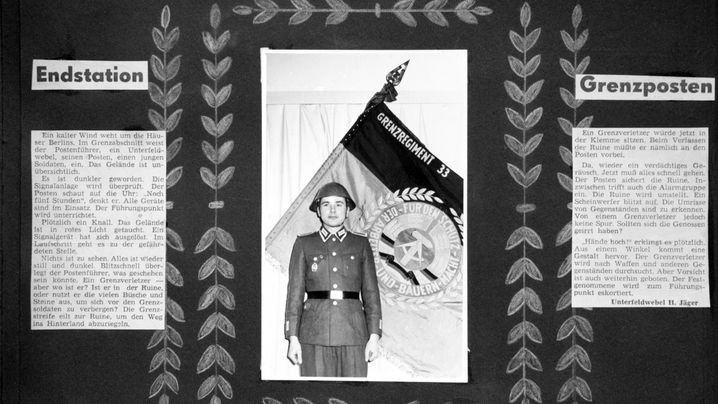 Photo Gallery: The Man Who Opened the Wall

SPIEGEL: Was it clear to you what was going to happen in the following hours?

Jäger: No, not to that extent, but it was clear to me that people wanting to leave would appear at our border crossing. That didn't trigger any panic or fear in me. All I thought was: Now you've got to find out whether they're allowed to travel immediately or not. It wasn't government departments but the passport control offices at the checkpoints that had to deal with the situation. I immediately telephoned my superior in the operating command center in Berlin-Treptow. He had also seen the news conference and was just as surprised as all of us. His order was to turn the people away.

SPIEGEL: When did the first people start appearing at your checkpoint?

Jäger: The first ones came very quickly. But they stood at a distance, they were uncertain.

SPIEGEL: The border guards used to refer to anyone trying to cross the border without the right documents as 'wild boar.'

SPIEGEL: At what point did things become tense?

Jäger: A police car turned up and announced through a loudspeaker to the waiting GDR citizens that they could report to a registry office where they would be issued with travel documents to let them leave. The GDR citizens started going to police stations. The next police station wasn't far from us, so it was five minutes there, five minutes back at most. The GDR citizens, not all but some of them, went there and came back very angry after 10 or 12 minutes. The police stations were closed. The GDR citizens felt they had been made fools of and said so loudly. "You're taking the piss! We demand to be let out." Schabowski (editor's note: Günter Schabowski was the East German government spokesman who announced the opening of the border crossings at a news conference on Nov. 9) had made the announcement on television, and they wanted us to implement it.

SPIEGEL: Did you try to explain the situation to your superior?

Jäger: I described the situation to Colonel Ziegenhorn in the command center and he said: "You know the order, there's nothing new." I said: "I just want to make you aware of the fact that hundreds of citizens are standing here and that the order has become a bit more problematic following the police announcement." He said: "Send them away." I said: "I can't send anyone away, I can only block off the border." That night one had to be braced for the possibility that GDR citizens might storm the border. One had to be braced for it.

SPIEGEL: Did these conversations keep taking place throught that evening?

Jäger: Yes, over and over again. I told him: "A solution must be found." And at some point he said to me: "Listen, I'll ring the ministry, you can listen in. We'll talk to the minister or one of his deputies." At that point he wanted to show me the chaos and that there wouldn't be any orders from the top. He wanted to show me that -- I knew Colonel Ziegenhorn well enough, that's why he wanted me to listen in on the phone call. So I heard how someone in the ministry asked whether Comrade Jäger was in a position to assess the situation properly or whether he was acting out of fear. When I heard that, I'd had enough. I shouted down the phone: "If you don't believe me, then just listen." I took the receiver and held it out of the window.

SPIEGEL: Did you discuss the situation with your colleagues at the other checkpoints?

Jäger: I spoke repeatedly to all officers in charge that evening. On the street, but also in my office. They demanded: "Harald, you've got to do something!" I said: "What am I supposed to do?" I wanted to hear what they thought. They stood together in my office and I wanted them to tell me what I should do. "It's up to you, you're the boss," they said. I said: "Should I let the GDR citizens leave? Or should I give the order to open fire?" "For God's sake!" they said. I only mentioned opening fire as a provocation, I wanted to know if they would support me if I allowed the GDR citizens to cross over. It was clear that it would be my responsibility but I wanted to be sure I would have their support. But that wasn't forthcoming. That's how the meeting ended.

SPIEGEL: Would it have been possible to give the order to open fire?

Jäger: No, we had the order not to open fire even if the border was breached, unless our own lives were in danger.

SPIEGEL: So shooting at people in front of the barriers was not an option at any point on November 9?

Jäger: No, but people could have been injured or killed even without shots being fired. In scuffles, or if there had been panic among the thousands gathered at the border crossing. That's why I gave my people the order: Open the barrier!

3 Bilder Photo Gallery: The Man Who Opened the Wall