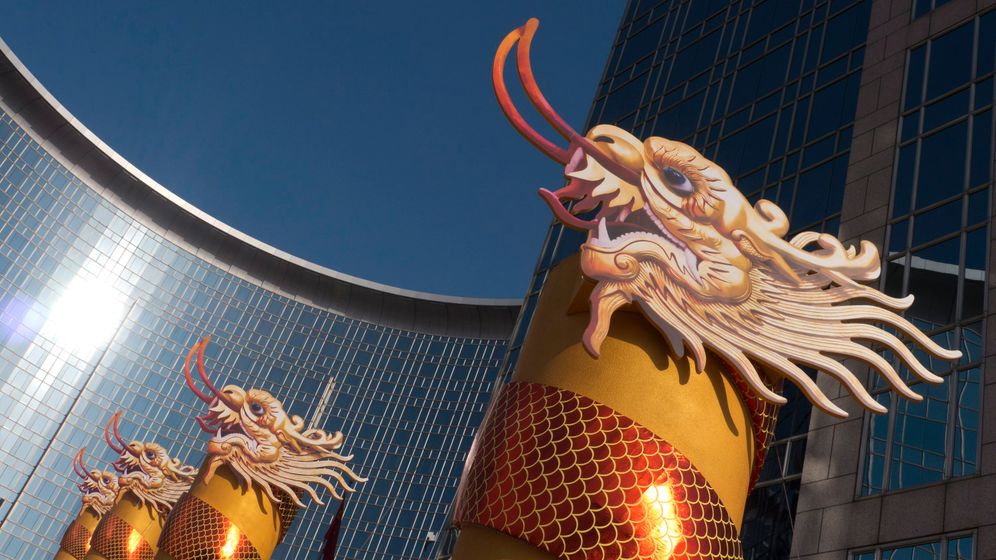 The caricature of the euro shows a small and ailing little man -- unshaven, bandaged and weak, his eyes peering down at the ground in humility and carrying an old hat in his right hand to collect money. Angela Merkel, who is accompanying this sad creation, looks serious as she knocks on the imperial gate seeking entry -- and to plead for a small handout for her problem child.

The picture created by a caricaturist for China's English-language Global Times newspaper isn't a very nice one. But there is a nugget of truth in the exaggerated image. Merkel isn't exactly going to be begging when she begins her three-day visit to China on Wednesday, but neither will she be opposed to leaving the country with one or more deals bringing multi-billion Chinese investments to the debt-plagued euro zone.

This is Merkel's fifth visit to China, with relations intensifying considerably in recent years. This time, however, German government officials have said they are "extremely pleased with the timing" because the trip is taking place just after the most recent European Union crisis summit, where a pact for stricter budget discipline in Europe was agreed, which Merkel touted as a "masterpiece." The chancellor now wants to explain the pact to the Chinese "first hand," say officials in Berlin. According to government sources, the chancellor, who also heads the conservative Christian Democratic Union (CDU) party, wants to report to Beijing on how Europe is moving down the path toward a stability union. "It is important to foster confidence in the euro zone," the official said.

That confidence should hopefully pay dividends. China is the world's second largest economy. Even though its economy has been cooling down lately, the country still had a growth rate of 9.2 percent in 2011, a figure Europeans can only dream of. The country also has estimated currency reserves of $3.2 trillion -- money that could be used to help the Europeans stabilize their common currency. The German government is also fond of pointing out that a stabile euro zone and a strong euro are also very much in the interests of the Chinese -- a fact that has been reiterated numerous times by the leadership in Beijing.

Accordingly, German government officials have said that the chancellor, in addition to meeting with President Hu Jintao and Premier Wen Jiabao, will also talk to financial investors -- even though investment banking is not Merkel's job. A senior government representative stressed in Berlin on Tuesday that "Chinese investments are expressly welcome. They will be sought, used and appreciated" -- both in Germany and in the rest of the euro zone.

In Europe, there are still hopes that the Chinese will invest in the euro rescue fund, the European Financial Stability Facility (EFSF), in order to leverage its guaranteed amounts and boost its clout in the fight against the debt crisis. So far, the signals from Beijing have been cautious, and a recent promotional tour in China by EFSF CEO Klaus Regling was unsuccessful. Sources in the German government point out that the leverage instruments have only recently been deployed. During her visit, Merkel is sure to take the opportunity to push the issue once again. The German government's official position has been carefully formulated: "The question of whether and how much the Chinese invest in the EFSF is not relevant at the moment, but it could become relevant."

The question is, however, probably very relevant at the International Monetary Fund (IMF), which also wants to increase its firepower to deal with the euro crisis. Here, too, China could make a contribution. But lobbying for such support is not Merkel's job, sources in Berlin have pointed out, arguing that it is a task for IMF head Christine Lagarde. Nevertheless, the chancellor is still likely to raise the issue.

It's safe to assume that Merkel will argue in favor of more direct Chinese investment in Germany and lobby for more contracts for German firms in China. Some 800 Chinese companies are already active in Germany, according to German government figures. For her visit to Beijing and Guangzhou, Merkel is being accompanied by a high-ranking 20-person delegation of business leaders, including a number of CEOs of major blue chip companies and representatives of Germany's famous Mittelstand, the small and medium-sized firms that comprise the country's economic backbone.

At the same time, Merkel's trip threatens to become overshadowed by unrest in Tibet as well as Beijing's draconian measures against Chinese civil rights activists. In Tibet, Chinese security forces have allegedly shot several demonstrators in the past week, according to Tibetans in exile. The Chinese authorities have now apparently intensified control and security measures on monasteries and temples in the autonomous region in order to quell further protests.

Additionally, one day before Merkel's departure for China, the 58-year-old civil rights activist Zhu Yufu, a veteran of the democracy movement, was charged with "inciting subversion of state power" in a people's court in the eastern Chinese city of Hangzhou. Three other civil rights activists received long prison sentences in recent weeks after being convicted of subversion.

Human rights groups are urging the chancellor to speak out on behalf of the persecuted civil rights activists during her visit and also to address the situation in Tibet. Although the German government declined to comment on individual cases ahead of Merkel's visit, a government official stressed that the chancellor will address the human rights situation in China "in a concrete way." Despite her interest in China's billions, the chancellor will not be able to avoid the issue.