The "events in Cologne" on New Year's Eve: It is a formulation that takes no time at all to type or, for politicians and functionaries, to speak into a microphone. But doing so is the first mistake. The word "events" seems so passive, so unavoidable. But what happened in Cologne was more than fate, they were violent sexual assaults perpetrated against women by groups of men. And if the numbers and portrayals are true, then one can use a term that is among the ugliest in a societal context: mob.

A mob is a collection of people that establish a social dynamic within which pretty much all other rules are ignored. Violence is often the result. A mob is a mobile, transitory, extralegal space -- established by those who temporarily peel away the thin veneer of civilization.

Social media, particularly Facebook and WhatsApp, have taken on a complex collection of roles in Germany. They constitute alternative public spheres, but are also platforms for documentation, discussion and organization. That sounds fantastic, and it sometimes is -- but not always. Because in the wake of the attacks committed on New Year's Eve in Cologne, it can also be seen how online mobs are established. And the degree to which they can escalate from the Internet into the real world can be gauged.

The manner in which the attacks in Cologne are being perceived, discussed and processed in social media would be worth a dozen catastrophe-sociology studies, but the "events in Cologne" should be examined at the outset.

What exactly happened there cannot -- yet, at least -- be described as precisely as many would like, which makes it difficult for people to cram them into their specific political worldview. If one is to take a sober look at what has thus far been established -- by examining videos, stories in the media, police reports and witness testimony -- the following picture emerges:

A group of around 1,000 people, heavily under the influence of alcohol, felt that, in celebrating the New Year, it was necessary to shoot fireworks at others or have them fired at themselves. That is doubtlessly imbecilic, but in the mass-drunkenness that often accompanies the explosive celebrations at the end of the year, it is an accepted absurdity in this country. Out of this group of people, small mobs made up of up to 40 men repeatedly formed, in apparent accordance with a plan: That of assailing women with intentions of both robbing them and sexually assaulting them. The police has spoken of "organized crime" and, disturbingly, of "repeat offenders known to the police." At the same time, though, it would seem that an aggressive atmosphere was established on the square in front of the Cologne train station that went beyond these mobs -- one characterized by sexism and violence toward women.

On the basis of many corresponding witness statements, police have spoken of "men with a North African or Arab appearance" in reference to both the large group and to the smaller mobs that grew out of it. This bit of information has launched a societal communication process that is made up almost exclusively of precipices and pitfalls.

Because yes, there is a problematic image of women in Muslim cultural circles. And yes, it must be investigated how this image of woman might lead to violence in Germany as well -- particularly when mobs form that could be connected to those cultural circles (please note the word "could").

It is also legitimate and necessary to include the cultural backgrounds of the perpetrator groups in the investigation. Anything else would be counterproductive window dressing, because mobs are formed out the explosive intensification of pre-existing social currents. That is the reason why German mobs hunt down foreign-looking people: It is the detonation of racism already present in our society and culture. It is easy to imagine the same happening in societies and cultures were sexism is already present.

In this context, however, it is essential to differentiate between those people who perpetrated crimes in Cologne and those thought to look like the people who perpetrated crimes in Cologne. This is crucial, and it is also extremely difficult because differentiation is but an arm's length from trivialization. And also because the justified abhorrence over the attacks leads to anger -- and anger is the emotion that is least interested in examining context and background. But it is absolutely necessary: Differentiation is civilization.

Being civilized means that, even after you meet nine black-haired people in a row who prove to be assholes, you don't punch the 10th person you meet in the mouth simply because he has black hair. There isn't a catalyst that suddenly makes racism acceptable. Those who, against the backdrop of the attacks in Cologne, are suddenly wondering if perhaps racist generalizations are OK after all were racist all along and were simply afraid to out themselves.

This is where social (and, in part, professional) media comes into play. In the wake of the New Year's mob in Cologne, a seemingly (to me) unprecedented wave of racist indignation has crashed over the German-language Internet -- a wave that has all the elements of being a digital mob:

Right-wing radicals in Cologne, for example, have already arranged to meet in order to hunt down foreigners. A mob is to be confronted by a counter-mob -- which is, for civilization, the worst-case scenario. Particularly telling are the racist and sexist calls to go to Cologne to ostensibly "protect our women." When exactly those people who otherwise spend the year telling women that they should button up their blouses suddenly start promoting women's rights, then it is instrumentalized racism.

The sudden interest in women's rights is feigned and is nothing other than a fake argument to legitimize one's own racism. The trivialization of sexual violence is ubiquitous and deeply rooted in society and culture -- German society and culture as well. The Cologne attacks on women perpetrated by mobs of men would have been a fitting occasion to address this state of affairs and to figure out why the majority of the German public cares so shockingly little about sexual violence -- unless it is committed by "men with a North African or Arab appearance."

Parallel to this is the fact that demands for a harsh reaction by law enforcement officials are silly. Such a reaction is so obviously necessary and it is also extremely cheap. Harshness costs nothing.

Instead, structures and narratives must be focused on: in Muslim families and in other families, in the education system, in the civil administration, in society at large. What are the factors that contribute to the development of such mobs, beyond those that were obviously present: namely the collection of drunk, sexist, criminal men? What do officials actually do about "repeat offenders known to the police?"

How can one prevent the creation of racist counter-mobs that head off to light refugee hostels on fire because they are home to people who look similar to the Cologne perpetrators? And finally, the core question: How can one confront the (worldwide, cross-cultural, also German) problem of violence against women without acting as though it only has to do with a few criminals in Cologne? 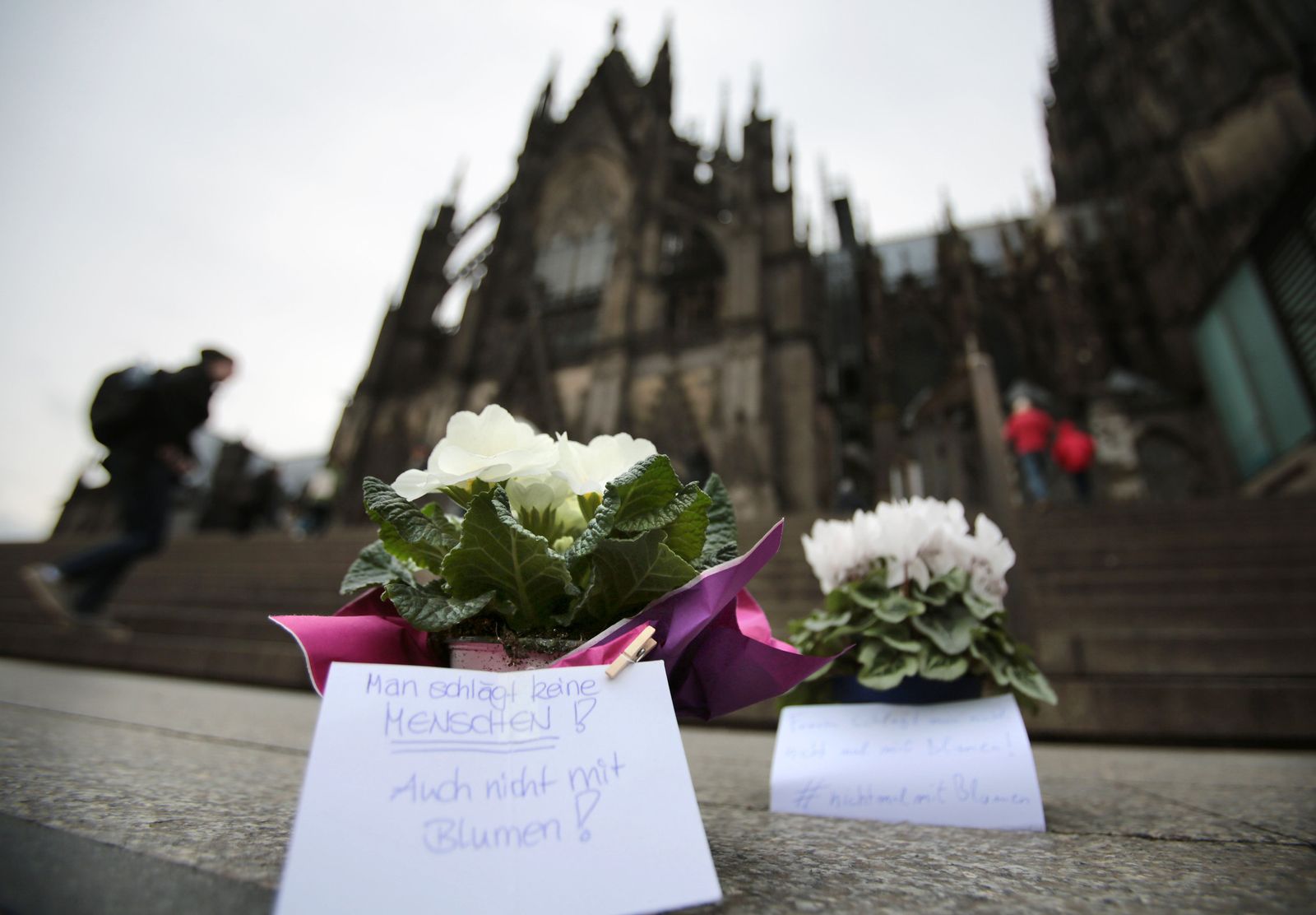 Flowers on the square in front of the Cologne cathedral where dozens of women were the victims of sexual attacks on New Year's Eve.