When Ludwig Baumann sees posters for the movie "Valkyrie," in which Tom Cruise plays Hitler's would-be assassin Claus Schenk von Stauffenberg, he gets choked up every time. The 87-year-old feels once again the same mixture of despair, bitterness and anger that has accompanied him his whole life. "How can we celebrate Stauffenberg as a hero," he says, "when Johann is still considered a traitor here in Germany?" 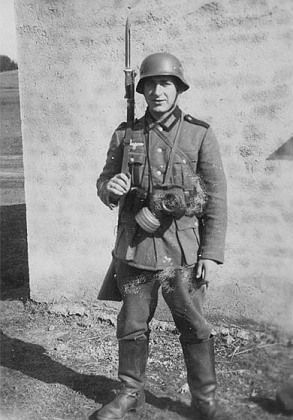 Johann Lukaschitz was executed by the Nazis for treason.

He is referring to Private First Class Johann Lukaschitz from Vienna. In 1944, Lukaschitz lay in the infirmary of the Wehrmacht prison Torgau-Fort Zinna, his joints badly damaged as a result of having his arms and legs bound together with heavy chains. Baumann, a convicted deserter, lay in the neighboring bed, suffering from diphtheria. Johann was a "thoroughly reflective, calm and humane man," recalls Baumann.

Lukaschitz, who was then 24, was sentenced to death for "failing to report a planned act of treason." A soldiers' council based on the Soviet model had been formed in Lukaschitz's unit. Lukaschitz had not wanted to join the council, but he also did not want to blow the whistle on his comrades. That was precisely the reason why he should die, ruled the Reichskriegsgericht, the highest Nazi-era military court for crimes of treason, on Feb. 3, 1944. A few days later, Lukaschitz was executed as a traitor by guillotine.

The verdicts against men like Lukaschitz were never repealed. Around 30,000 deserters, conscientious objectors and traitors were sentenced to death by the Nazi judiciary, of whom an estimated 20,000 were actually executed. The German parliament, the Bundestag, in 2002 approved the blanket rehabilitation of all Wehrmacht deserters, conscientious objectors and so-called Wehrkraftzersetzer or "underminers of morale." Only those convicted of Kriegsverrat -- treason committed by members of Hitler's Wehrmacht -- were explicitly excluded, because it could not be ruled out that the supposed "traitors" had harmed German soldiers or civilians through their actions.

The renowned military historian Wolfram Wette and his colleague Detlef Vogel have called the Nazi treason verdicts "The Last Taboo" in a book of that name. In their study -- the first ever devoted to the subject of treason during the Third Reich -- the researchers came to the conclusion that, based on the records which have been analyzed so far, the soldiers acted mainly out of ethical motives. (Most of the relevant documents have still not been examined, however.)

The work of the researchers forms the basis for an initiative aimed at having the sentences overturned. The bill has been filed with the Bundestag since 2006. But the conservative Christian Democrats and the center-left Social Democrats -- who together make up Germany's governing grand coalition -- have so far prevented a decision on the bill, partly because the initiative comes from the far-left Left Party, which is unpopular with the grand coalition.

Hence the story of this last struggle to rehabilitate the Third Reich traitors is also a story about how Germany is still struggling to deal with its Nazi past, and an example of how party politics can delay for years an idea which in reality has the potential to be supported by a majority of lawmakers.

Wette and his colleagues have examined 33 verdicts of treason delivered by the Nazi military justice system. Their conclusion is that the image of the so-called traitors in the public mind is largely false. Particularly in the last years of the war, most of the executed traitors were ordinary soldiers. Simply criticizing the regime in private was enough to warrant a death sentence. Saving Jews was also regarded as treason. In the case of the soldier Josef Salz, writing journal entries which were favorable towards Jews and critical of Adolf Hitler was enough for him to be condemned to death by military judges.

These supposed traitors, says Wette, had in no way betrayed their comrades. Even if this should be the case, however, it would not necessarily stand in the way of rehabilitation. The doyen of modern German military history, Manfred Messerschmidt, pointed out that all of the treason verdicts delivered by Hitler's Volkgerichtshof or People's Court, which tried those accused of political offenses, have been lifted. Messerschmidt asks why soldiers convicted of Kriegsverrat should be treated any differently from civilians.

Wette presented his research findings to the Bundestag's legal committee last year. But the Christian Democrats, represented by Norbert Geis, a member of parliament for the conservative Christian Social Union, stood by their hard line: no blanket rehabilitation. Relatives of those soldiers convicted of treason could apply for individual cases to be re-examined, they argued.

To justify their hard line, the Christian Democrats needed at least one case in which the accused committed a crime which would be judged as serious even by today's standards. That was how the memorable performance of the expert Rolf-Dieter Müller, academic director of the Bundeswehr's Military History Research Institute in Potsdam, came about.

Müller described the case of Edgar Feuchtinger, an obviously corrupt general who lined his own pockets and disclosed internal military information in letters to his lover. It was, according to Müller, "a particularly blatant case of treason." The expert argued that rehabilitating Feuchtinger would cause a "scandal." The testimony made a strong impression on the committee.

However, the lawyer Helmut Kramer, who had been called as an expert by the Greens, had a "strange feeling" about the Feuchtinger case during the Bundestag hearing. Kramer, who also worked on the Wette study, asked Müller to identify his historical sources. Müller's first response was evasive. Then he was only able to produce one document that contained only an indirect reproduction of the verdict. The original has not been made available.

Kramer's interpretation of this document is completely different from Müller's. His conclusion is given in a letter to the Bundestag's legal affairs committee: "Professor Müller made up his example." The case as depicted only exists "in the imagination of the expert," he wrote. Kramer accused Müller of "falsification of history in the service of politics."

General Feuchtinger, according to Kramer's interpretation, was not convicted of treason, but of the Nazi-era offense of "undermining morale" -- and as a result would have long ago been rehabilitated. Müller rejects the allegations -- but leaves himself a back door, saying: "As a non-lawyer, I understand the verdict as being, among another things, a treason verdict."

The Christian Democrats have in the meantime put a safe distance between themselves and their chosen expert. "The opinion of an expert does not automatically reflect the position of the Christian Democrat's parliamentary group," says CDU member of parliament Andreas Schmidt, who is chairman of the legal affairs committee.

But those people who, like Ludwig Baumann, believed the road might actually now be free for rehabilitation, had to learn the hard way how politics works. The Christian Democrats and the SPD do not want to approve the proposed legislation -- which was due to be discussed Wednesday by the Bundestag's domestic affairs and legal affairs committees and which will have its second reading in the Bundestag in March -- because it comes from the Left Party's parliamentary group. "The PDS are only interested in making us look foolish," says Carl-Christian Dressel, an SPD member of the legal affairs committee, referring to one of the parties which merged to found the Left Party in 2007. The Christian Democrats and the SPD, which are Germany's two largest parties, are not prepared to grant a parliamentary success to the Left Party in an election-packed year like 2009.

The 31-year-old Left Party member of parliament Jan Korte, who is considered undogmatic, proposed the bill and kept trying to push it forward and negotiating with his colleagues. For the young politician, it has been a "sobering lesson about parliamentary politics."

Only gradually did it dawn on the parliamentary groups that their partisan tactical wrangling was meeting with incomprehension. Bishop Wolfgang Huber sent a written request to Justice Minister Brigitte Zypries, a member of the SPD, while Jürgen Gantzel, the retired head of the Working Group on the Causes of War at the University of Hamburg, called for "the last legal taboo in Germany's process of coming to terms with its past" to be abolished.

Unofficially, Zypries' ministry has already begun sounding out Korte on whether the Left Party could not in fact withdraw its bill -- so that the grand coalition can put forward its own. Left Party floor leader Gregor Gysi was apparently "ready to do so for the sake of the issue." But he also had one condition, namely that all the parliamentary groups should jointly propose a new rehabilitation bill.

This in turn does not suit the Christian Democrats, who cannot imagine finding common cause with the Left Party in a big election year, which also marks the 20th anniversary of the fall of the Berlin Wall and the 60th anniversary of the founding of the Federal Republic of Germany. But the pressure on the Christian Democrats has been considerable since the discrediting of their expert Rolf-Dieter Müller. Andreas Schmidt now wants to "find a way" -- just "not with the Left Party." This could all result in a situation whereby every parliamentary group wants the traitors to be rehabilitated and yet a bill might still not get passed during this legislative period.

Just like every year on Jan. 27, the German Bundestag held a memorial session on Tuesday for the victims of National Socialism. Ludwig Baumann was in the Reichstag's visitors' gallery for the occasion.

The "embarrassing party haggling" over the treason issue has left him feeling disillusioned. Sixty years after the founding of the Federal Republic of Germany, he is still waiting for a clear statement from the parliament.