It was supposed to be an initiative to stop child pornography on the Internet. But now the German government finds itself in a uniquely awkward situation after a bill which it no longer wanted was signed into law by the country's president.

German President Horst Köhler signed the law on Wednesday after deciding that there were "no significant concerns" regarding the law's compatibility with the German constitution. The Access Impediment Law, as it is known, is aimed at combating child pornography and allows access to offensive Web sites to be blocked.

However the German coalition government, which pairs Chancellor Angela Merkel's conservatives with the business-friendly Free Democratic Party, has decided it no longer wants the law, which was massively opposed by Internet users. Instead of blocking access to Web sites, it now wants to delete offensive Internet content instead.

The law was originally proposed by the previous coalition government of the Christian Democrats and the center-left Social Democrats (SPD) in April 2009. But after the September 2009 national election, the Christian Democrats and the FDP stipulated in their coalition agreement that they would delete offensive content rather than blocking access. The FDP had opposed the original Access Impediment Law on civil rights grounds.

Some members of the coalition government had hoped that Köhler would wait longer before signing the law, so that they would have time to draw up yet another anti-child pornography law that simultaneously repealed the Access Impediment Law. However the president, who is known for his independent will, did not do the government that favor. The law will formally enter into force once it is published in Germany's Federal Law Gazette on Feb. 22.

The German government now finds itself in the embarrassing situation of having a law it no longer wants. Justice Minister Sabine Leutheusser-Schnarrenberger said Wednesday that the government was unanimous that it would not apply the new law. "New regulations will quickly be introduced that correspond to the principle of deleting rather than blocking access," she said. The Interior Ministry also said in a statement that the government plans to introduce a new law reflecting the new approach. Until that law is passed, the government's position is that offensive sites should be deleted, rather than access blocked, the statement said.

The SPD -- which has apparently also done a U-turn on the issue -- is now set to introduce a bill before the Bundestag, the lower house of the German parliament, on Feb. 25 which would repeal the new law, thereby overturning the legal basis for blocking Internet access. The other opposition parties, the Greens and the far-left Left Party, also want to repeal the legislation. This puts the government in the unenviable position of having to support an opposition bill which it desperately needs in order to get itself out of its current predicament.

The Bitkom association, which represents the German IT industry, called on the government to clarify the situation and to quickly repeal the new law. A spokesman for the special-interest Pirate Party, which opposes Internet controls, said it was "unbelievable" that President Köhler had signed the law into force.

The original Access Impediment Law was hugely controversial in Germany. There was massive opposition from Internet activists, who saw it as an attempt to censor the Web and an attack on the right to freedom of expression. Users feared that access to harmless sites could also be blocked and that the access restrictions could easily be circumnavigated by savvy surfers.

There were also legal concerns about the fact that Germany's Federal Criminal Police Office (BKA) would effectively become the highest authority on the German Internet and that the judiciary would have no say in the matter. BKA officials were to be charged with drawing up secret lists of Web sites for Internet service providers (ISPs), who would have to block those sites.

The issue also caused a certain amount of political fallout. Then Family Minister Ursula von der Leyen, a member of the CDU who is now German labor minister, was behind the initiative to combat child pornography. Critics dubbed her "Zensursula," a portmanteau word combining her name and the German word for censorship. The issue also cost the SPD support among Internet users and helped boost the newly founded Pirate Party, which campaigned in the 2009 election on an Internet freedom and civil rights platform and got an impressive 2 percent of the total vote.

The French government, meanwhile, is pushing ahead with similar legislation which will ban access to certain Web sites among other far-reaching measures to control the Internet. The lower house of the French parliament passed the law, known as Loppsi 2, on Tuesday.

With reporting by Marcel Rosenbach and Christian Stöcker 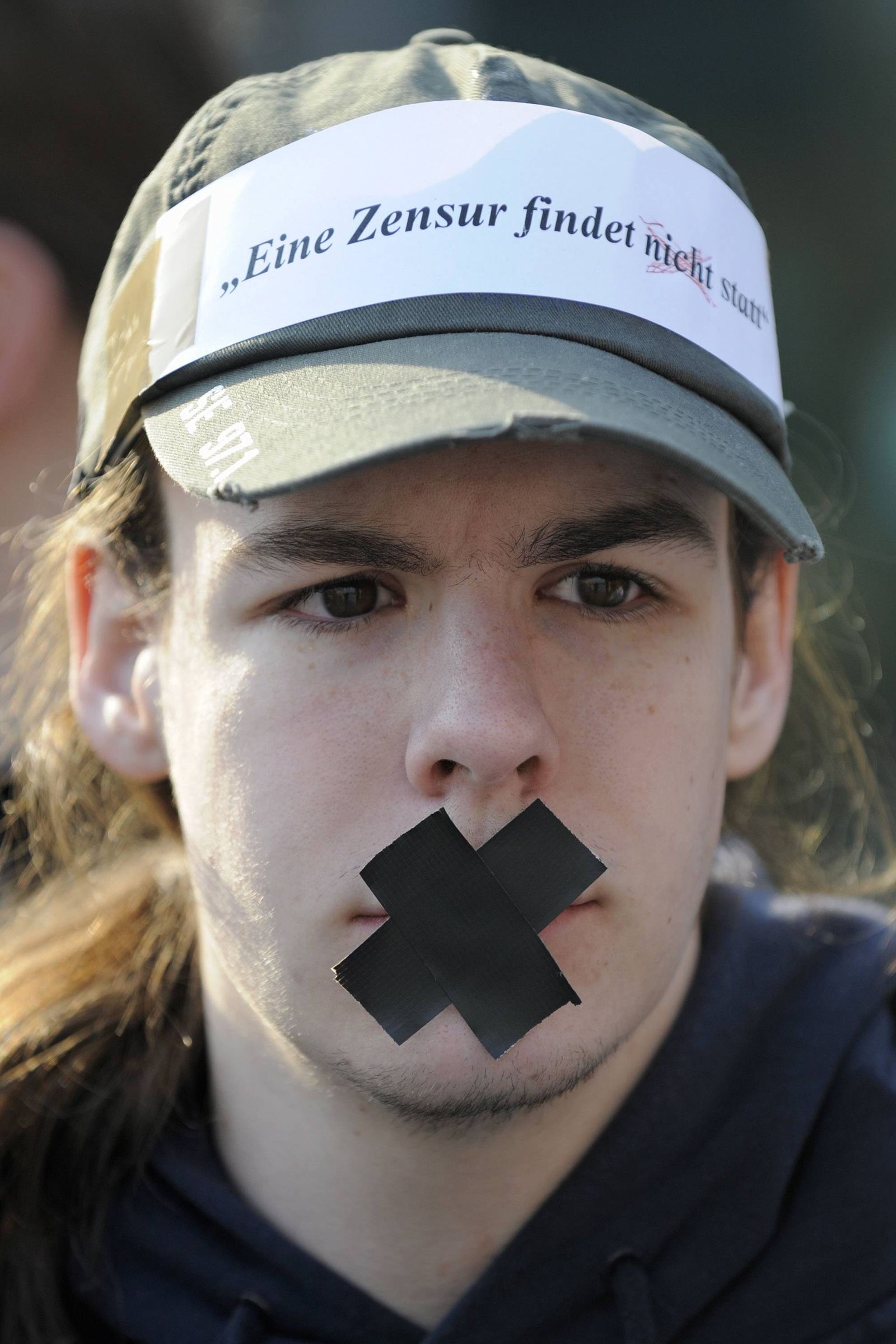 A protester makes his feeling about Internet censorship known at an April 2009 protest against the proposed anti-child pornography law.