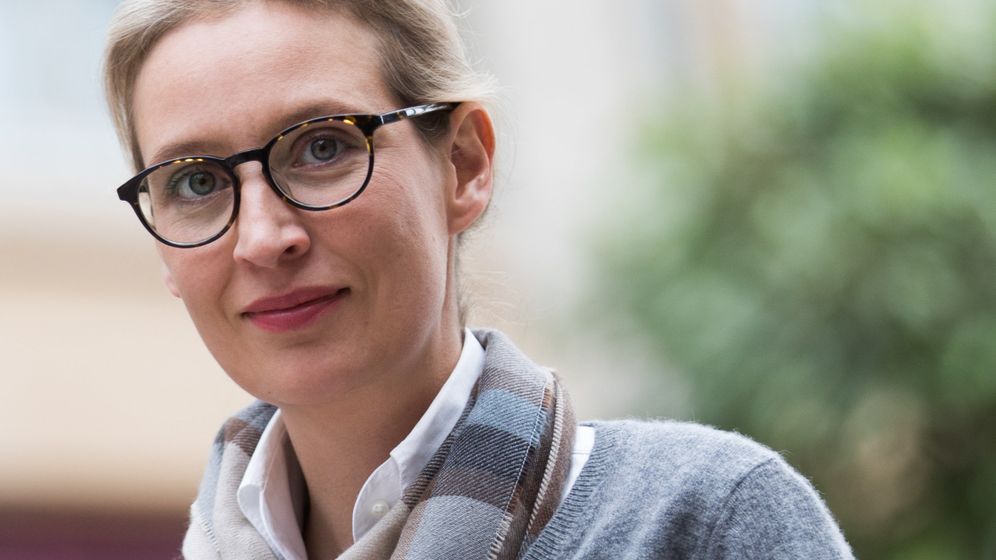 On June 1, 2015, shortly before the Alternative for Germany's national convention in the city of Essen, Alice Weidel wrote an email to the person who, at the time, was the German political party's most-important member. "In your view, what are my chances of becoming a member of the national committee?" Weidel asked AfD founder Bernd Lucke.

She planned to be in Asia at the time of the scheduled party conference, she wrote, and it would have to be worth her while to make the long trip back in time. "I'm only doing all this to support you anyway and to save what is left to save," Weidel wrote.

She assured her loyalty to Lucke and her support for his efforts to protect the AfD from the far-right wing of the party, spearheaded at the time by Frauke Petry. Ultimately, though, it didn't help. In the end, it wasn't just Petry who toppled him: Weidel made a last-minute switch to Petry's camp just in time to get elected as a member of the national committee with Petry's support. Lucke left the conference badly damaged and would soon leave the party altogether.

The weekend before last, Weidel's ideological flexibility was on clear display once again. Together with senior party official Alexander Gauland, the 38-year-old was nominated as AfD's co-lead candidate - meaning the two will be the official faces of the party as it heads into federal parliamentary elections in September. The vote is widely expected to see the party land seats in the Bundestag, Germany's parliament, for the first time since its founding as a right-wing alternative to Chancellor Angela Merkel's Christian Democrats in 2013.

The move comes after Petry said she would not pursue the candidacy. Once again, Weidel had the backing of the party's far-right wing - and yet again, someone else lost out. This time, it was Frauke Petry, who appears to be on her way out as AfD's party chair.

At first glance, Weidel's involvement with AfD is hard to explain. Weidel's entire career and lifestyle is in direct contradiction to her right-wing populist party's doctrines. How can a lesbian woman raising two children together with her partner even bear the existence of a party that disparages gays and lesbians as an "outspoken minority"? And how can an economist who has a residence in Switzerland, who has lived in China for years and has worked for globally networked companies beat the drum for a party that wants to preserve Germany's national "identity" and seal its borders?

Weidel's former colleagues at the investment bank Goldman Sachs, where she began her first job after finishing her university studies, have been sharing videos of her public appearances along with stunned comments. "Here is Alice. What happened to her?" reads one. Another, written by the man who had trained Weidel at Goldman Sachs, reads: "Who is the real Alice?" Is it the business woman or the right-wing populist?

In public appearances, Weidel's tone is stilted and her message sounds rehearsed - as though she were playing the role of zealot just to please her right-wing audience. But her success as a rabble-rouser in conservative pantsuits is the product of cool calculation. Weidel has so far simply avoided revealing any convictions that might be detrimental to her political career. Anything that could bother people or be damaging is suppressed. Partners who are no longer useful, like Lucke or Petry, are simply shoved aside if necessary.

Politically, Weidel has always been an agitator. Since becoming a member of AfD, the economist has maintained a fundamentally critical position toward the euro - one likely inspired by her late doctoral thesis adviser, Peter Oberender, who had likewise been critical of the common currency. She has championed "Dexit," Germany's withdrawal from the European currency union. Not even euroskeptical former party head Lucke had wanted to go that far.

In her four years as a member of AfD, Weidel has also maintained her position opposing a "centralistic EU." The same applies to her revulsion of Islam and her contempt for poorly educated refugees. Although Weidel may respect top bankers from Pakistan, she has far less sympathy for refugees from Afghanistan who lack high school degrees.

And it was Weidel, who canceled a planned meeting at the last minute in May 2016 with Aiman Mazyek, the head of the Central Council of Muslims in Germany. She announced at the time that she wanted to have nothing to do with "confessed supporters of Sharia" law who had never distanced themselves from the "Stone Age practices" of their religion. Whereas party head Petry at least dared to contact Mazyek, Weidel still maintains today that there is no point in conducting dialog with Muslim organizations. "As a woman, I also want to be able to take the last train home at night without fear," she announced at the party's recent convention in Cologne. It was obvious from her statement that she was referring to foreigners and not white-skinned and Christian passengers.

Despite her own sexual identity, Weidel has never rejected her party's homophobia. She knows that would only serve to make her unpopular.

Her involvement in that effort derailed her attempt to get elected as the chair of AfD's state chapter in Baden-Württemberg. She learned her lesson. From that point on, she kept a low profile and didn't speak out publicly against Höcke or about a possible run for national parliament as the party's lead candidate. Instead, she left it to conservative party member Gauland to discreetly promote the pair within the right-wing of the party. "Ms. Weidel and I are only available as a team," Gauland said at the party conference in Cologne. In the end, both got the nomination, garnering 67.7 percent of the votes. Weidel didn't wait long before extending her gratitude to the party's extremist right. At her first press conference as the party's lead candidate, she announced she would no longer exclude the possibility of joint appearances together with far-right Höcke.

Even people who knew her back in her high school days, in the small town of Versmold in North Rhine-Westphalia, recognized her ambition and determination. In her senior class yearbook, they wrote that "Lille," Alice's nickname, was a "dominant character" and hd an "extreme ability to assert herself," that came across to some as "arrogant." "That, of course, doesn't always make being friends with you easy," one classmate wrote. Nevertheless, the classmate was convinced that Lille would go far - perhaps to Sydney, Zürich, London or New York. "On that note, see you later, on the career ladder."

The rungs of that ladder are not easy to reconstruct, given that AfD's lead candidate would not grant an interview or provide a copy of her resume. Yet like Petry, her qualifications are impeccable. After finishing with the best grades in her graduating class at the University of Bayreuth, she took a job as an economist at Goldman Sachs. Weidel stated through a spokesman that Goldman Sachs was a "dream employer" for her at the time.

The other jobs on her way up the career ladder were equally prestigious, but she only stayed at each for a relatively short amount of time. Be it Goldman Sachs or Allianz Global Investors, she seldom stayed in one place for longer than two years. There's something unsettled in the way her life has progressed so far. Weidel spent the longest stint in China, where she worked on her Ph.D. thesis until 2011 and worked for the Bank of China.

Weidel's last position as an employee was in 2013 in the small town of Bad Rothenfelde, near where she grew up, at the firm Heristo, a company specializing in meat refinement and animal feed. A junior manager at the firm had gone to high school with Weidel. But she didn't stay long. The local Haller Kreisblatt newspaper reported that the company parted ways with her in 2014.

A Life in Switzerland?

Since then, she has worked as a freelance consultant for startups and is officially registered as a resident of the town of Überlingen on Lake Constance. But Weidel never truly shed her international lifestyle. As the Swiss newspaper Der Bund revealed, she has a second residence in the city of Biel, Switzerland, about 200 kilometers south of Überlingen.

On Sunday, however, the respected NZZ am Sonntag newspaper in Zürich reported that she pays her taxes in Switzerland. In response, Weidel issued a statement criticizing the report which, she said, had sparked "absurd speculation." She noted that she is not paid for her work on behalf of AfD and that she will campaign in an unpaid, volunteer role as candidate. "Because of this full-time activity, my life is centered in Germany, where I am also registered. In terms of tax law, the rules are clearly defined and any speculation is unnecessary."

Still, if a debate over the lead candidate's true loyalty to Germany is sparked, it could test the patience of the AfD grassroots.