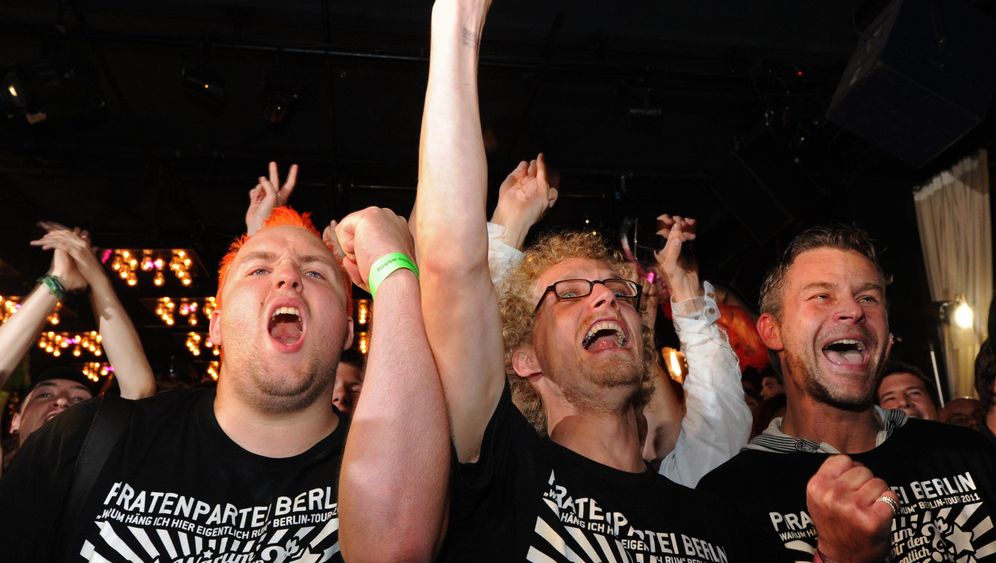 Photo Gallery: A Victory for the Pirates

As Berlin election results came in on Sunday evening, sweaty members of the Pirate Party danced arm in arm beneath a disco ball at popular club in the city's Kreuzberg district. The smell of marijuana spread through the informal party, where guests made their own sandwiches and drank bottled beer.

"I can't believe it," said newly elected parliamentarian Christopher Lauer as he fell onto a sofa, sending a message of thanks out via his Twitter account for the 8.9 percent of voter support. "It is breathtaking, a surreal feeling, because there is nothing that compares to this."

Standing before the television screen, the leader of the Pirate Party, Sebastian Nerz, called the historic moment "cool."

"It's the first time since the 1980s that a new political power has come onto the stage," he said.

Indeed, the support for the party -- founded in 2006 on a civil liberties platform that focused on Internet freedoms -- was sensational. Not only will the Pirate Party enter a regional government for the first time, but its results far surpassed the five percent hurdle needed for parliamentary representation. The success was so unexpected that the party had only put 15 candidates on its list of nominations. Had their support been just a little higher, some of their seats would have remained empty because post-election nominations of candidates isn't allowed.

It's an amateur mistake, but the young party is honest about their growing pains. "Of course we are amateurs," said lead candidate Andreas Baum. "It would be senseless to deny it." It doesn't seem to matter that his press representative doesn't know her mobile phone number and has no business cards yet. "We are visionary, but practical," he adds.

But it was precisely this approach that proved successful for the Pirate Party. Their humorous campaign posters, with slogans like "Privatize religion," were the work of party members, not an advertising company. All of the city-state's some 1,000 members were encouraged to take part.

The Pirate Party sees itself as the antipode to Chancellor Angela Merkel's conservative Christian Democrats. "We want more freedom," says Pavel Mayer, an IT businessman and the party's third parliamentary candidate. The Pirate Party believes that "people are intelligent and full of goodwill," he adds.

Their election success is due in part to the weaknesses of the other parties, he says. During the campaign, more established parties, including the once rebellious Greens, mocked the Pirate Party. Green candidate Renate Künast said the Greens would "resocialize" the Pirate Party to keep them from running in the next election. Center-left Social Democrat Klaus Wowereit, who won his third term as mayor in the election, warned Berliners against "voting out of pure protest" for the new party and criticized their "totally unclear profile" in an interview with Bild am Sonntag.

The criticism may actually have helped drive young voters to the Pirate Party. Indeed, other parties may have overlooked the fact that the Pirate Party addressed the concerns and interests of a relevant group of voters. The party focuses not only on classic themes like direct democracy, transparency and online data protection, but also on demands that would be unthinkable to traditional politicians. The party wants to see the introduction of an unconditional basic income, for example, and the legalization of soft drugs. Both positions sit well in alternative Berlin districts such as Kreuzberg and Friedrichshain.

The Pirates also have something other parties have long since lost -- credibility, authenticity and freshness. The erstwhile alternative Greens, whose share of the vote in the Berlin election fell well behind their expectations, were also once the young party with funny mottos and unconventional campaign methods. When they entered the Berlin parliament in 1981, other parties were skeptical. At the time, the now imploding Free Democrats described the Greens as "domestic policy anarchists and foreign policy gamblers", while lead CDU candidate Richard von Weizsäcker, who would later be appointed German President, said they were "impossible to describe."

At the time, the Greens, too, had some serious campaign issues that were well-received in the more alternative districts: nature conservation, equal rights and peace. These issues of the future landed the Greens in the Berlin parliament with 7.2 percent of the vote that year.

On Sunday, the Pirate Party managed the same feat with even better results. But they hope to do things differently. "Contrary to the Greens we plan to stay true to our ideals in the future," party leader Sebastian Nerz said.