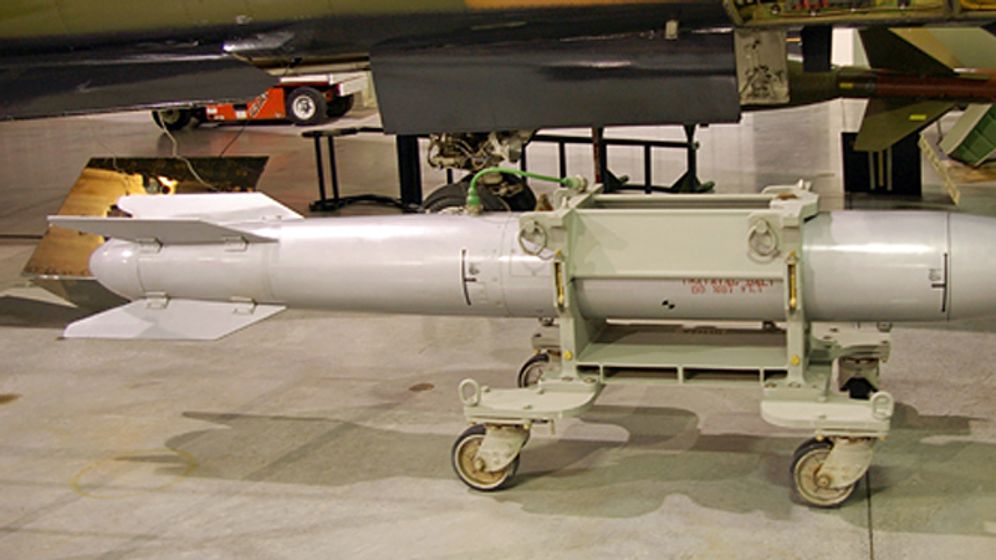 In a move that could have an impact on the future of nuclear weapons stored in Germany and other parts of Europe, the United States Department of Energy has included requests in its latest budget proposal for funding to modernize parts of the country's aging nuclear arsenal -- a move that would seem to contradict the vision of a nuclear weapons-free world President Barack Obama announced last year.

From 2011 to 2015, the agency wants to allocate close to $2 billion to push forward plans to modernize its arsenal of B-61 nuclear bombs. Some of these weapons are being kept in Europe, including some at storage facilities at the German air force base in Büchel. In total, the US Air Force still has around 150 strategic B-61 bombs in its active arsenal as well as around 400 non-strategic models and a reserve of around 200 further non-strategic bombs.

The weapons are leftovers of the nuclear arms race during the Cold War in Europe. The German government is currently seeking the removal of the bombs through consultations in NATO. The coalition contract between Chancellor Angela Merkel's Christian Democrats and Foreign Minister Guido Westerwelle's business-friendly Free Democratic Party (FDP) explicitly states that the government will push for the weapons' removal. Indeed, Westerwelle's public stance for removing the nuclear weapons has led to some alienation in Washington. Germany and four other NATO states are expected to discuss the withdrawal of the approximately 200 nuclear weapons that are still being stored in Europe at a summit of NATO foreign ministers in Tallinn at the end of April. Should the budget request be approved, it could mean further hurdles to getting the weapons removed.

In the US, the National Nuclear Security Administration (NNSA) is responsible for the development, construction and modernization of nuclear weapons. The semi-autonomous agency is part of the Department of Energy. It closely coordinates its plans with the Pentagon. NNSA administrator Thomas d'Agostino and Defense Secretary Robert Gates both back a comprehensive modernization of US nuclear weapons as well as the industrial infrastructure supporting them. They already served under former President George W. Bush and have sponsored both the modernization of older nuclear weapons as well as the development of a new generation, the so-called Reliable Replacement Warhead (RRW).

The NNSA's budget proposal first envisions a feasibility study into the modernization options for the "oldest nuclear weapons in the enduring stockpile," the B-61s. The study is expected to look into the possibilities for a "life extension" of the bombs' "nuclear and non-nuclear" components -- as well as for "re-using" the "pit," the bomb's core nuclear components.

In addition, the weapons -- which are carried by dual capable European Tornado or American F-15E and F-16 C/D fighter bomber aircraft -- would be adapted to make them compatible with the next generation of nuclear-capable fighter jets, such as the US Joint Strike Fighter. After completion of the feasibility study and the selection of components for the modernization, their development and the Life Extension Program would begin. The program is the single biggest line-item for the proposed 2011 NNSA budget. It is expected to end with the development of what would largely be a new nuclear weapon: the B-61, modification 12.

The plan isn't entirely new. Congress has already approved an initial $32.5 million in the NNSA budget for 2010. The money allows for initial study work on the modernization of the B-61. But Congress also set conditions for the approval of any sums in excess of that amount and made clear that it reserved the final decision on any work to modernize the nuclear components. One year later, NNSA is now following up. The preliminary work has now been transformed into the proposal for a multibillion dollar project that is being given the highest priority.

From 5 Bomb Varieties to 2 Modern Ones

It's a deft move by the supporters of a modernization of America's nuclear weapons. Currently, there are five versions of the B-61 nuclear bomb. Two are used as weaponry for strategic bombers: the Mod 7 and the nuclear bunker buster, the Mod 11. Three others are tactical or non-strategic nuclear weapons that are also deployed in European NATO countries. The weapons stored in Europe are the oldest models, the B-61 Mod 3 and 4 as well as the newer B-61 Mod 10, which is used as a reserve and deployed in the US. The latter are modified warheads built after the Pershing II missiles were destroyed as a result of the Intermediate-Range Nuclear Forces (INF) Treaty.

Under the modernization program, the five existing models would be transformed into two modern modifications of the weapon -- the bunker-busting B-61 Mod 11 and the newer nuclear multi-purpose Mod 12. This largely new weapon could be used from about 2018 onward by both strategic bombers as well as tactical fighter aircraft.

The project, though, has yet to be approved. First, US President Barack Obama must make the final decision as part of his "Nuclear Posture Review." The Obama administration is currently finalizing the report and will soon submit it to Congress. It will outline President Obama's plans for the future nuclear weapons policy of the United States.

Recent weeks have been marked by contentious debate over the report in Washington. Both the Departments of Defense and Energy both want to keep the doors open for a comprehensive modernization of the nuclear arsenal and possibly even for the construction of new weapons. They are currently in a fierce dispute with Vice President Joe Biden over the extent to which the report should include practical steps aimed at underscoring Obama's vision of a nuclear weapons-free world and whether the president will still leave open the possibility of widely modernizing existing weapons nonetheless. Ultimately it will be a question of whether the Obama administration publicly rules out the development of new nuclear weapons and of what the president believes constitutes a "new" weapon.

Hans Kristensen, head of the nuclear information project at the Federation of American Scientists believes the budget demands by the Energy Department are also part of a poker game for money. "In Washington, you have to demand a lot from Congress if you want to get the money approved for your most important priorities after all the usual compromises," he said.

Kristensen sees the budget proposal from the Energy Department as an opening shot for the next round of the battle for money. He said it would be highly interesting to see, "whether the modernization of the B-61 bombs will be approved in the end. ... It's controversial. Last year Congress already noted that the plan could also 'keep open the door to new nuclear weapons.'"