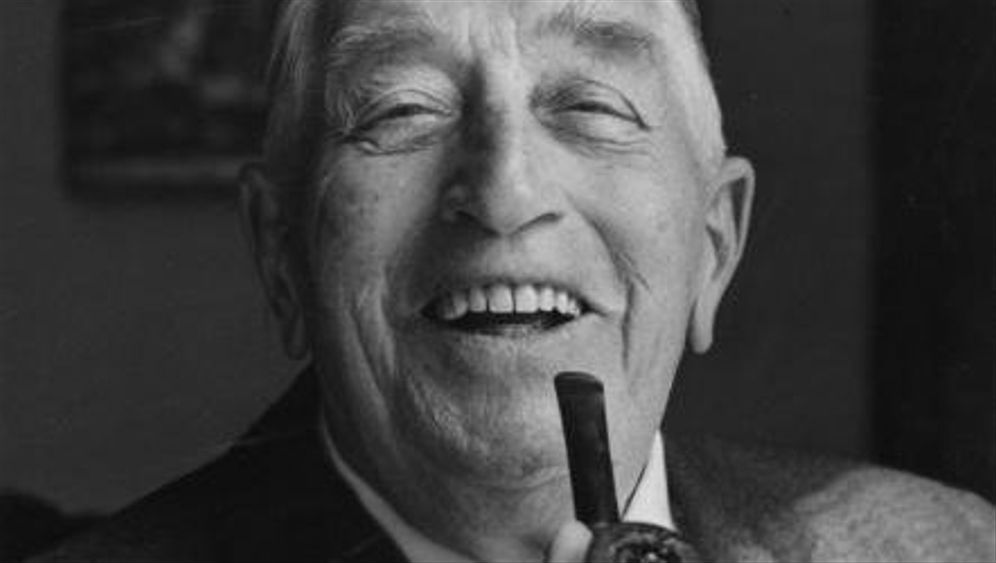 The treads of the tanks thundered against the ground as the American 104th Infantry Division, known as the "Timberwolves," approached the German city of Halle. Approximately 250,000 residents and refugees cowered within the city, whose hospitals were already full of the seriously wounded. House-to-house fighting had reached the outskirts of the city.

On April 15, 1945, American Major General Terry Allen dropped flyers on the city, bearing the ultimatum "surrender or destruction." The deadline for the surrender passed.

To avoid spilling its own blood, the American Army ordered an airstrike. Three waves of planes, 960 in total, would drop explosives and incendiary bombs, igniting a firestorm. The Air Force anticipated 30 to 40 percent of the city's residents would die.

But things didn't go as planned. Shortly before the scheduled inferno, a German ambulance trundled through enemy lines, bearing a gentleman in knickerbockers with a pipe tucked in the corner of his mouth. The man asked to be brought to the American commander, whom he addressed as "comrade," speaking impeccable English. He then appealed to the general's "noble human heart."

Allen postponed the destruction order, and the two sat down to a glass of whiskey. The miraculous result was that Halle was spared from devastating carpet bombing, a notable exception in the war. And the hero in knickerbockers, Felix Graf von Luckner (1881-1966), played a key role in that event.

Tribute to a Daredevil

The German count achieved fame during World War I for his daredevil sea voyages. After the war, he became a star in the United States, even performing in Hollywood. Yet no monument, memorial plaque or street name in Halle recalls the city's savior. For years, the city council has blocked any official tribute. Mayor Dagmar Szabados of the center-left Social Democratic Party (SPD) considers Luckner a "militarist" and a "bad example."

Now the business-friendly Free Democratic Party (FDP) wants to break through that barricade. The party has launched an initiative to erect a commemorative stone plaque on the city's market square in April, financed by private donors. Honoring Luckner this way is likely to fuel a debate over the enigmatic sailor. Some commend him as hero who tried to promote international understanding. Germany's first post-war president, Theodor Heuss, awarded him the Order of Merit of the Federal Republic of Germany in 1953. But others consider Luckner a servant of the Nazis.

This much is clear: The naval officer's ascent began in late 1916, when his auxiliary cruiser, the SMS Seeadler ("sea eagle"), broke through a British naval blockade in the North Sea with two cannons onboard and set off on a daring raiding trip around the world's oceans.

The Seeadler sank 14 enemy ships in its career. Luckner took enemy sailors onboard before sinking their ships, later setting them free. Around 30,000 nautical miles of piracy later, Luckner's weakened crew reached Mopelia Atoll, west of Tahiti, where a squall wrecked the anchored ship against a coral reef.

Luckner then traveled another 2,300 nautical miles through the South Sea in his lifeboat, before ending up a prisoner of war in New Zealand. Part of his crew made it all the way to distant Easter Island.

These adventures, as well as his gallant conduct in war, brought the German nobleman fame. His book "The Sea Devil" (the title was inspired by Luckner's nickname Seeteufel) sold a million copies in the US. The "gentleman pirate" filled halls on a global lecture tour.

Over time, Luckner, who was now an honorary citizen of San Francisco, embellished his stories more and more. At receptions overseas, he introduced his wife as "daughter of the Nordic king of dynamite, Alfred Nobel," and in Australia, he presented himself as a champion boxer, sparring partner of the famous German boxer Max Schmeling. Luckner became a Baron Münchhausen of the seas, "caught in his own web of half-truths," writes biographer Norbert von Frankenstein.

Propaganda Tour for the Nazis

But was Luckner a Nazi as well? Recent research challenges that belief.

Certainly, the naval captain was not too scrupulous to offer his services to Hitler and Goebbels. In 1933, when Hitler took power, Luckner was bankrupt and his ship confiscated in the port of New York. He was quick to ask the Nazi government to grant him 20,000 reichsmarks.

But the Nazis kept their distance, since the count was a Freemason, and even instituted a gag order against him.

Luckner's career didn't start to look up until Reinhard Heydrich -- who would later become one of the main organizers of the Holocaust -- put in a good word for him. In 1937, the count was allowed to set out on a sea voyage as propaganda for the Third Reich, traveling as far as Sumatra.

But instead of promoting his nation's Nazi rulers, the German pirate pursued his own interests. He threw Nazi brochures overboard to make space on the ship and embraced the richest Jew in Puerto Rico, according to a report by a spy onboard the ship. The same spy said that Luckner himself also smoked nearly all of the 30,000 cigarettes that had been donated by manufacturer Reemtsma.

An expert opinion commissioned by the city of Halle has reached the conclusion that the man was "opportunistic" and "of an apolitical nature." The historians who authored the opinion write: "It speaks in his favor that he was neither a committed National Socialist, nor did he join the Nazi Party."

During the communist era, when Halle was part of East Germany, the city studiously ignored the maverick seafarer. But now a private association is setting up a small museum to him in the city, in a bid to dispel the lingering prejudices about Luckner's Nazi associations. Displays include a feather cape that was a gift from the Maori to the Sea Devil, and even salvaged pieces of his ship that wrecked in the South Sea in 1917.

Matthias Maurer, head of the association that runs the museum, calls local politicians' inflexible position "unfair." He points out: "There are streets named after Luckner everywhere -- except here."

Still, there is deep-seated doubt, especially among left-wing politicians. There are other, more unsavory allegations against Luckner. Historical documents show that after the count completed his PR trip in August 1939, he was called in front of a "Special Court of Honor of the Führer" on charges of incest. He had allegedly forced himself on his own daughter at Berlin's Hotel Excelsior. He was also accused of having abused his lawyer's eight-year-old child. "In a state of sensual excitement," the documents read, he "pulled the girl with her back toward him" and satisfied himself with "intercourse-like movements."

Luckner reportedly confessed, but the transcript of his questioning has disappeared. The case never went to trial, because Hitler didn't want it to cause a stir.

'A Great Debt of Gratitude'

But is all of that true? The historians researching on behalf of the city of Halle consider the accusations credible. Other researchers, however, see the case as a "Nazi construct," a trap designed to "silence" the count.

Gerry Kley, a senior FDP politician in the Halle city council, believes this second version of events. "You have to weigh up both sides," he says. "The sexual misconduct is unproven, while Luckner's role in saving the city is unequivocal."

"My dear count, I'm going to bomb tonight," General Allen is said to have bellowed when the naval hero completed his death-defying journey to the American command post in April 1945. Little-known photographs show the two men bent over a map, Luckner grimacing and raising his fist. It seems he pulled out all the stops in his quest to save his hometown from destruction.

"The town of Halle owes a great debt of gratitude to Count von Luckner," American commander Leon Rouge also noted after the war. "Let me state that categorically."

The count was not a noble and altruistic individual. After averting the bombing ultimatum, Luckner was supposed to deliver an important message immediately to the German command. Instead, he first immersed himself in the cheering crowd as he made his way back. Then he stopped off for a drink with friends, then gave his "dear mother" the news. All this delayed the mission so long that it nearly failed after all.

Yet Halle remained standing. The shadowy figure who played an important role in that achievement was possibly a pedophile and certainly a braggart -- but he saved tens of thousands of lives.