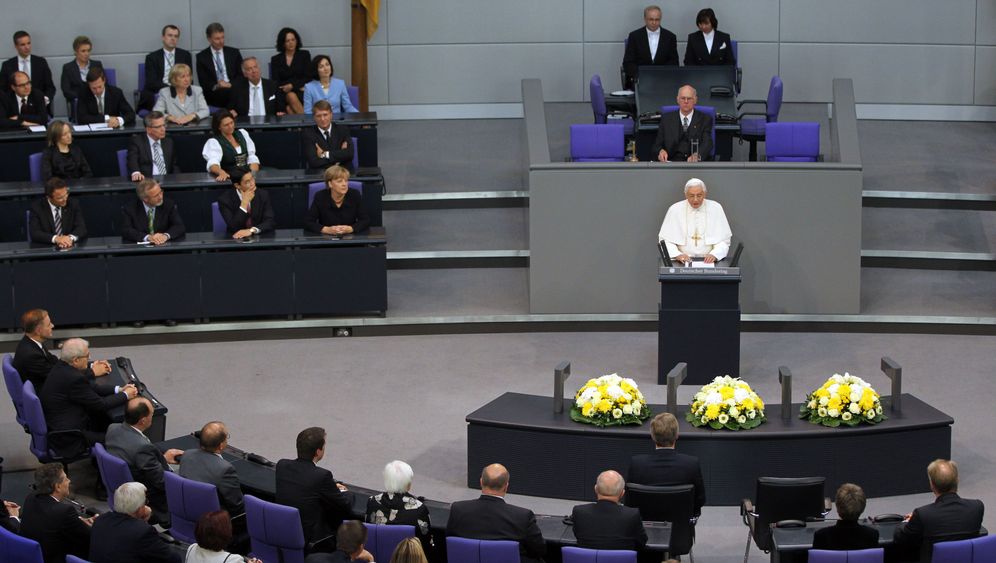 "Very positive" is how Vatican spokesman Federico Lombardi described the first hours of Pope Benedict XVI's vist to Germany, which began on Thursday. "It has really been a good beginning for us and the pope," he said.

Given the amount of criticism of the pope in the run-up to his arrival in Berlin, such a positive reception was hardly a given. And with dozens of lawmakers staying away from the speech the pope delivered before the Bundestag, Germany's parliament, on Thursday afternoon and hundreds more people demonstrating outside, it remains to be seen whether the rest of his visit will go as smoothly.

His speech before German parliament, though, despite 45 empty chairs in the Left Party faction and several more among the Greens, was well received. The pope warned that politicians must be wary of sacrificing their values for power, saying that it is a lesson that "we Germans know from our own experience."

He also said that European values such as human rights and equality stem from a belief in God and said "to ignore this or to see it as part of our past would be an amputation of our culture as a whole." He said that Europe's culture is the result of the meeting between "Israeli belief in God, the philosophical logic of Greece and the legal thought of Rome. This tripartate encounter forms Europe's inner identity."

Benedict's speech before the German parliament came in the middle of a busy, first-day schedule. He touched down at Tegel Airport at 10:16 a.m. -- 15 minutes ahead of schedule -- and was received on a red carpet by German President Christian Wulff and Chancellor Angela Merkel. It is Benedict's third visit to Germany as pope, but his first state visit. As such, he was greeted with military honors and a 21-gun salute. Several members of Merkel's cabinet were also on hand as were representatives of the Catholic Church.

On the plane ride to Berlin, the pope voiced understanding for the criticism voiced before his visit. "That is normal in a free society," he said. But he also said he was pleased to be coming to Germany. "I was born in Germany," he said. "Such roots cannot be severed, nor should they be."

The pope's main message for his trip, however, became clear soon after he arrived at Bellevue Palace, Wulff's official residence in Berlin. In his first remarks upon being officially welcomed, Benedict lamented the increasing indifference toward religion in Germany. He said that a common basis is necessary for human cohabitation and added that "religion is one of the foundations for successful cooperation." It is a theme that has become a central focus of his papacy.

When the pope arrived at Bellevue Palace, Wulff greeted him with the words: "welcome home Holy Father." Wulff said that Germany is a country in which "history and culture are closely related to the Christian faith and the struggle with that faith." But he also added that Germany is a place "where the Christian belief is no longer a foregone conclusion and a country in which the church must redefine its place in a pluralistic society."

Wulff's comments were a gentle reminder of the abuse scandal that shook the Catholic Church in Germany and triggered an exodus of some 181,000 from Catholicism last year. Indeed, on the way to Germany on Thursday morning, the pope spoke on the plane about the declining membership numbers and called on Catholics in both Germany and the rest of the world not to turn their backs on the church as a result of scandal. He added that he understands that victims of sexual abuse and their families might say "this is not my church anymore," but he also noted that there are "both good and bad fish in the Lord's net."

The Power to Act

The pope also held a private meeting with Merkel, during which the two spoke about the financial crisis and Germany's place in the European Union, Merkel told reporters. "I made it clear that European unity is of the utmost importance for us Germans, that it means wealth, democracy and freedom," Merkel said, adding that it the message was "well-received." She said they also discussed the financial crisis and agreed that politicians "ought to have the power to act and not only to react."

Benedict's address to the Bundestag soon thereafter included a touch of apparently unintended humor. Towards the end of his talk, the pope praised the environmental movement of the 1970s, saying it has since become self-evident that people must listen to the call of nature.

The Green Party immediately erupted in spontaneous cheering, to which the pope responded, "it should, of course, be clear that I am not making propaganda for a specific political party." Parliamentarians laughed and gave the pope an ovation.

Following his speech to the Bundestag, the pope will celebrate a Mass before an estimated 70,000 people at Berlin's Olympic Stadium. His stay in Germany will include stops in the eastern city of Erfurt and in Freiburg, a city in the far southwestern corner of the country. More than 250,000 people have registered to attend the Masses he will be celebrating before he heads back to Rome on Sunday.