First, the good news for the plaintiff: A southern German labor court found that Sule Eisele-Gaffaroglu had indeed been discriminated against by her employer. That, though, is likely the only bright spot the plaintiff can point to following the judgment on Thursday. She and her lawyer had asked for almost a half-million euros in what they hoped would become a landmark case in German anti-discrimination law. Instead, the court awarded Eisele-Gaffaroglu €10,818 -- equivalent to three months of her normal salary. 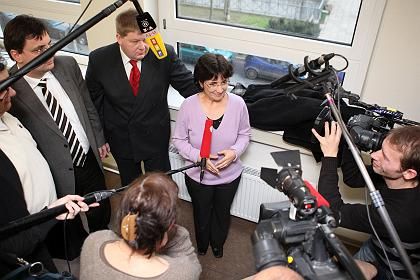 Sule Eisele-Gaffaroglu with her lawyer Klaus Michael Alenfelder on Thursday.

Eisele-Gaffaroglu, a German citizen born in Turkey, filed a gender discrimination suit against her employer R+V Insurance in December 2006, after a demotion she received from the company after informing managers she was pregnant. The former insurance salesperson was assigned to a less lucrative region after returning from maternity leave. Furthermore, her replacement at her previous position, a man, was provided an office of his own and given a secretary, both things that Eisele-Gaffaroglu had requested but never received.

Judge Jörg Krampe agreed that she had been discriminated against. But he found her request for damages to be to high. She and Alenfelder had calculated the damages request based on the lifetime earning difference between her old position and the less-lucrative one assigned to her after she had her baby. German courts have long been wary of large judgments for fear of introducing the country to the kind of million-euro damage awards that have become common in the United States.

Eisele-Gaffaroglu said she was "infuriated" by the judgment. "Given what was done to me, it is a joke," she said according to the Süddeutsche Zeitung.

The case received a fair amount of media attention this year as it came before the labor court in the southern Germany town of Wiesbaden. Berlin pushed through a new anti-discrimination law in 2006 -- to bring the country's jurisprudence in line with European Union norms -- and Eisele-Gaffaroglu's case was seen as one which could add teeth to the law. In explaining why he was asking for such a large award, Alenfelder told SPIEGEL ONLINE in April: "If it's no fun anymore -- if it's expensive and it hurts -- companies won't do it anymore."

R+V Insurance maintained throughout the case that no discrimination had taken place and that the decision to move Eisele-Gaffaroglu to a different region was nothing more than an everyday business matter.

Despite her disappointment, even the partial success is significant. German courts have, through the years, often proven unwilling to rule in favor of the plaintiff in anti-discrimination cases. Recent case law, though, has lessened the burden of proof on the plaintiff and allowed new methods of argumentation in proving that discrimination did take place. Some have argued that, even in this case, there may have been no judgment at all but for the amount of media attention it generated.

Alenfelder -- who is also president of the German Society for Anti-Discrimination law -- plans to continue to fight for Eisele-Gaffaroglu. He says Germany isn't yet sensitive enough to the existence of discrimination of all types -- and that he and his client will appeal the decision to the state labor court.