A capsized tanker carrying 2,400 tons of sulfuric acid continues to block ship traffic on the Rhine, one of the busiest commercial arteries in Europe, almost a week after it overturned.

The river is closed to commercial traffic from Mainz to Koblenz, along the picturesque Middle Rhine region popular with tourists, and 249 ships are waiting along the river, unable to pass, Uwe Gilberg-Rindsfüsser, spokesman for the rescue operations, told SPIEGEL ONLINE. Rindsfüsser would not speculate as to when the river would open again for traffic.

Rescue workers are awaiting the arrival of a pontoon, expected to arrive Wednesday afternoon, to help stabilize the ship, and four cranes to help move the tanker off the river's rocky bottom. Two cranes are expected to arrive on Friday, Rindsfüsser said.

Police continue to search for two of the four crew members of the ship, the Waldhof, and are using sonar equipment in their efforts. Pedestrians walking along the riverbank over the weekend reported seeing something that looked like a body, but police were unable to recover it, Rindsfüsser said.

Companies waiting for their ships to pass are reporting losses of up to €2,000 ($2,670) per day, said Ralf Schäfer of the German Federal Waterways and Shipping Administration (WSV). More than 60,000 ships travel the river annually, transporting some 60 million tons of goods, he said.

At 5 a.m. on Jan. 13 the Waldhof capsized near the river's famous Lorelei Rock. The cause of the accident remains unclear, but river traffic has been blocked since rescue workers arrived at the scene.

The tanker, owned by the German company Lehnkering, was delivering sulfuric acid to BASF in Antwerp, Belgium from the company's location in Ludgwigshafen, Germany. BASF has experts on the scene to work with rescue efforts, company spokeswoman Friederike Segeberg told SPIEGEL ONLINE.

Authorities said Wednesday they have no indications that the sulfuric acid has leaked from the ship's hull. BASF uses sulfuric acid for, among other things, the production of certain plastics, Segeberg said. Several cities and municipalities, including Duisburg and Düsseldorf, rely on the river as a source of drinking water.

A Narrow and Rocky Passage

The passage of the Rhine near the Lorelei rock is narrow and deep, and since the Middle Ages it has been known to be one of the most dangerous sections of the river. Still, there hasn't been a major accident at the site in the past 30 years, Schäfer said.

The rock sits in the Middle Rhine, which stretches between Bingen and Bonn along a picturesque gorge. The region is a UNESCO World Heritage Site and is a popular destination for foreign tourists.

The Lorelei rock is named after the mythical mermaid who lured fishermen to their deaths by singing the most beautiful song they ever heard. It has inspired dozens of poems and songs, such as Heinrich Heine's "Die Lorelei," which tells the story of a siren luring shipmen with her singing, causing them to crash on rocks in the riverbed.

The Rhine is the longest river in Germany, and runs from the Swiss Alps to the North Sea in the Netherlands. The river's commercial use dates back to the Roman Empire, when the Rhine fromed the empire's northern frontier. 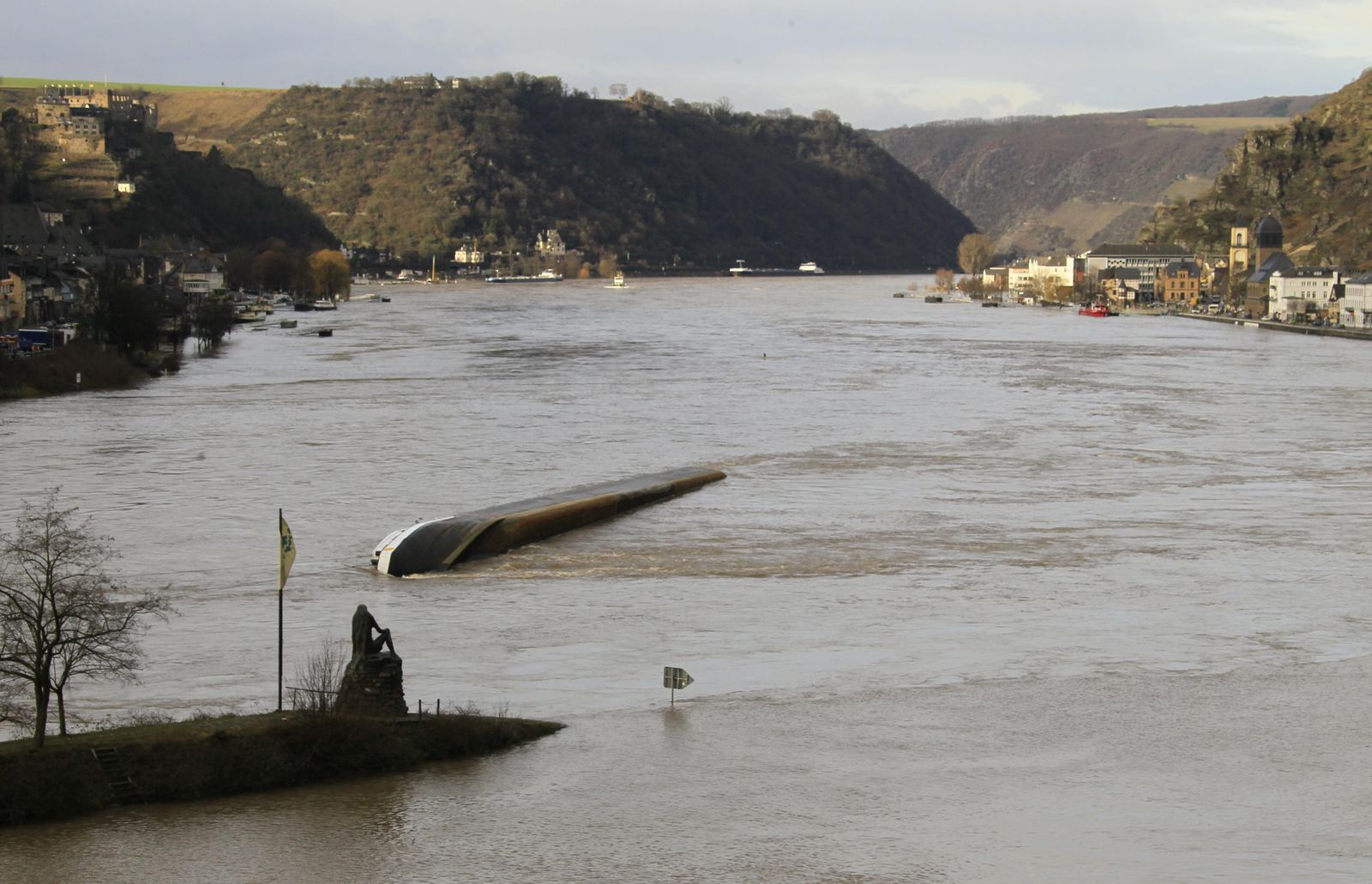 The Lorelei statue and the capsized tanker near a narrow bend in the Middle Rhine.