Last Saturday, at around 3 p.m., the enemies stood face to face. They were separated by just a few meters, one police vehicle and hundreds of officers. The facedown was the result of a calculated, staged provocation.

"Now, we are going to show the caricatures," said a member of the right-wing populist Pro-NRW group.

It was an announcement that resembled a scientific experiment: How an action is followed by a reaction. The anti-Islamists from Pro-NRW made sure that they got what they wanted. One member climbed onto another's shoulders, police say, to ensure that the gathered Salafists would get a good look at the Muhammad caricature drawn by Danish cartoonist Kurt Westergaard. Violence ensued. Rocks and bottles were hurled by the Salafists, and one even drew a knife and stabbed two officers. In the end, 29 police were injured.

"Death to the infidels!" screamed the Salafists.

The experiment was a success and an escalation of violence was the result. And that is exactly how the right-wing mini-party Pro-NRW wants it. The Saturday march was one of a series of 25 such events, at which the group displayed anti-Islam caricatures in front of Muslim facilities.

Provocation has been part of Pro-NRW's campaign as elections this weekend in the western state of North Rhine-Westphalia approach. "Of course it was part of the campaign," Pro-NRW spokesman Markus Wiener told SPIEGEL ONLINE earlier this week. On the other side of the divide, Salafists, too, are eager to attract attention.

Indeed, Salafists and right-wing extremists are more similar than one might immediately assume based on the weekend clash in Bonn. Both groups hope to profit from such displays of power.

"The Salafists' violent attacks corroborate the image Pro-NRW has of Islam as a violent religion," says Uwe Backes, deputy director of the Hannah Arendt Institute for the Research on Totalitarianism at Dresden University of Technology. The extremist group sees the Salafists' assaults on the police as irrefutable proof of the veracity of their beliefs.

For the Salafists, the escalation serves to demonstrate their precarious position in German society. "Look at us, we are a threatened minority," is their message, Backes says. It is a message, he adds, that could prove attractive to some, particularly young people.

"There will be those who feel called upon and will take up the extreme worldview they have on offer," he says. The Salafists' recent campaign to distribute free Korans across Germany was likewise designed to attract attention, but the weekend violence could ultimately be just as effective.

But it isn't just their similar goals that unite the two groups. "Salafists and right-wing extremists seek to take advantage of discontent," says Lazaros Miliopoulos, who studies extremism at the University of Bonn.

Their extremism and the absolutist nature of their ideas are comparable. Miliopoulos says that such groups seek to capitalize on people's fears. For Pro-NRW, that effort manifests itself in the way the party equates Islam with Islamism -- religion with ideology.

Their own ideology, however, is seen as the absolute truth, another characteristic that Pro-NRW shares with the Salafists. No doubts and no differentiations are allowed. Both ideologies are rooted in an extreme simplification of reality, allowing them to easily decide who is right and who is wrong. Nuance would only endanger their simple truths.

"Totalitarian thought is rooted in the willingness to promote one's own opinion with violence if necessary," Miliopoulos says. The Salafists made clear in Bonn, for example, that they are prepared to fight for what they see as the infallibility of their beliefs. And not just with words, but with rocks, sticks and knives if necessary.

In the final analysis, extremists such as those from Pro-NRW and the Salafists are united in their aspiration to do away with democracy and the freedoms it guarantees.

"Both groups are united in their desire to create a pure world," says Miliopoulos. Their critique of the status quo is telling in this regard: The world as it currently exists, so goes the message, is bad and must be changed. Any discrepancies between their view of the world and reality tend to be explained by way of conspiracy theories.

"They seek to shift responsibility," the researcher says. Salafists attacked the police, he said, in part because of their belief that the officers were protecting Pro-NRW activists out of conviction.

Searching for the Correct Worldview

Conspiracy theories are also useful for explaining their own failures. "Their view is simple: The great good can't be achieved because evil perfidiously blocks it," Miliopoulos says.

Extremism needs to play the role of victim, just as it needs to demonstrate its power. When large numbers of Salafists come together to pray on the streets, it can also be a demonstration of power, similiar to those conducted by "Black Bloc" radicals at (anti-globalization or anti-capitalism) protests, says Miliopoulos. "Individuals become part of a large mass," he says.

Salafists and Islamophobes are united by a yearning for purity, a desire to establish homogeneous societies -- united either by religious beliefs or ideological convictions. "Each group is convinced that it represents the only correct worldview and seeks to exclude those who don't share it," Backes, from the Hannah Arendt Institute, says.

Pro-NRW shares its Islamophobic views with many other right-wing extremist groups. "Since Sept. 11, 2001, it has become clear that anti-Semitism has been on the wane and Islamophobia has taken its place," says Backes.

Islamophobia is an ideological phenomenon that has taken place across Europe -- in the Netherlands, Denmark, Norway, Great Britain and elsewhere -- and has become the core belief uniting right-wing groups.

The Salafists, for their part, constitute a small group in Germany. The Office for the Protection of the Constitution, the country's domestic intelligence agency, estimates that there are only about 1,000 militant Salafists in the country.

"In contrast to the right-wing extremists, the Salafists profess not to have a political agenda," Miliopoulos says. "Rather, they seek a manifestation of Islam in the world according to their own -- purely spiritual -- vision. From the point of view of our society, however, that can lead to violent Islamism, and as such is very political."

How can one effectively counter this new phenomenon? "One can use tools available in laws governing demonstrations to prevent escalation by, for example, not allowing right-wing extremists to hold demonstrations in front of mosques," Backes says.

Repression, though, must also be complemented with prevention, particularly when it comes to the Salafists. "So far, not enough has been done in this area," Backes says. 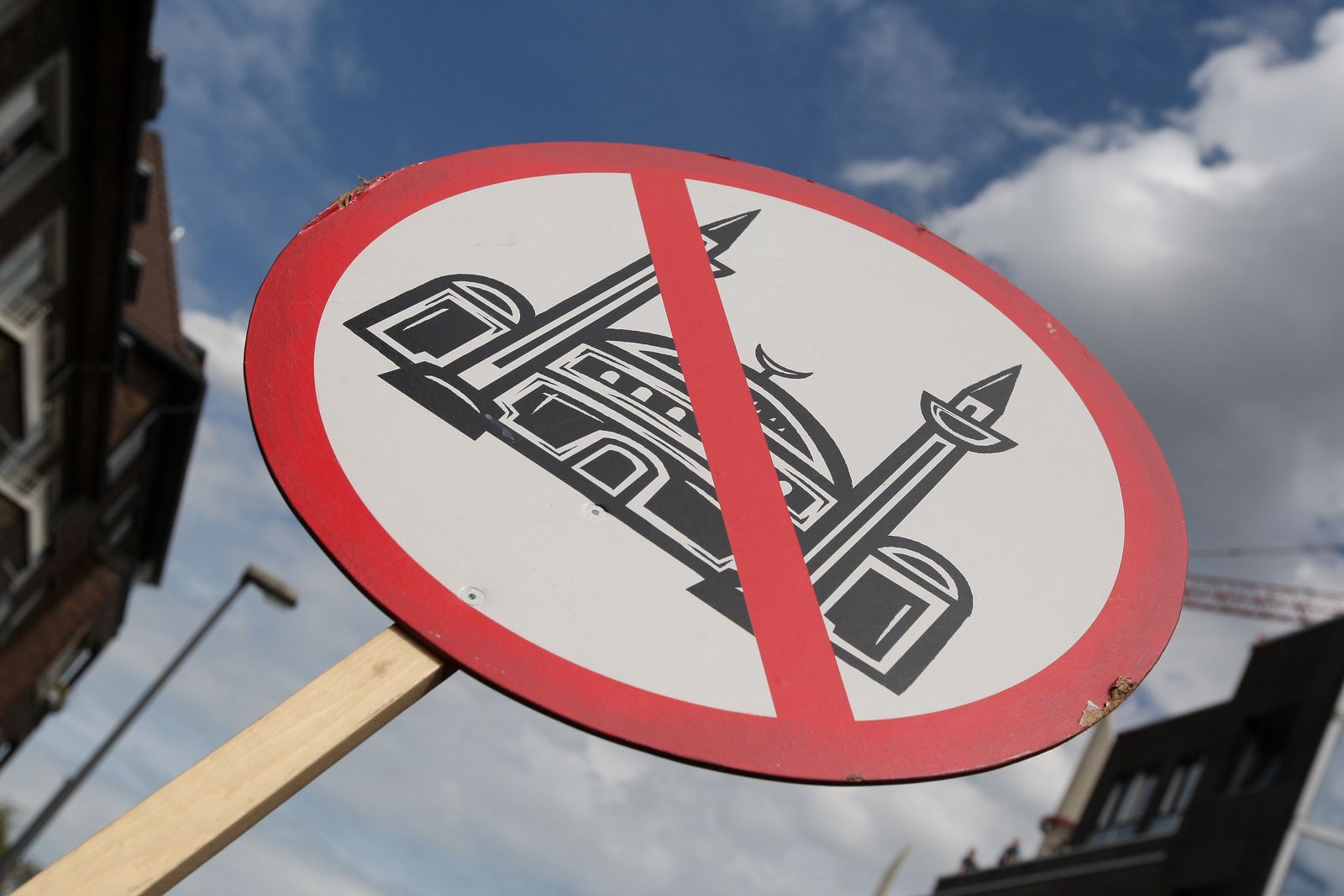 A sign held by anti-Islam Pro-NRW followers at a demonstration on Tuesday in Cologne.