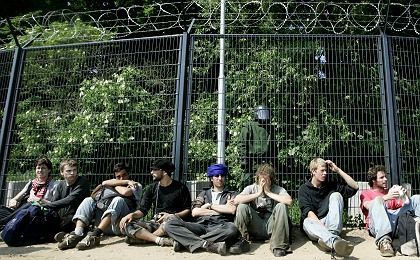 The plan of course, was to keep demonstrators away from the fence surrounding the G-8 summit at Heiligendamm. On early Thursday afternoon, though, at least one corner of that barricade -- a 12-kilometer-long, 2.5-meter high razor wire topped stripe through the vibrant green fields -- was transformed into the backdrop for a gathering of anti-G-8 activists that resembled summer camp more than a protest.

Clumps of bedraggled-looking 20-somethings sat crowded under the few trees to escape the hot sun. A few children ran around playing in the neighboring field. Dozens had succumbed to the exhaustion of manning the blockades all night -- and the sleep deprivation resulting from long festive nights in the three camps set up for protestors a few kilometers away.

Indeed, with the police having backed off on the attempts to clear people from the no-demo area originally foreseen to keep protesters far away from the fence, the only thing left to fight seems to be the boredom.

"I'm really looking forward to opening the papers tomorrow and seeing images of peace rather than the water cannons from yesterday," said Sabine Neuhausen, 35, as she lounged under the leafy branches of a linden tree. "This is a great party."

Many gathered just in front of the 30 or so police preventing people from getting any closer to the east entrance of the Heiligendamm enclosure. But they werent there to confront the cops. Rather, one young man had taken it upon himself to provide a bit of entertainment. At his behest, about 100 demonstrators were trying to teach the riot gear-clad police, some clearly uncomfortable in the hot sun, how to do the wave cheer. Each time the police failed to react, a groan went up from the crowd.

Getting to the site had become surprisingly simple. On the road down from Bad Doberan only a very few police were to be seen. And those who were on the road, with about 10 police vans, were complaining that they could go neither forward nor backward. Two groups of about 20 demonstrators each had sat down in the road blocking their way. The police, it seemed, didn't want a repeat of Wednesday when countless blockades were broken up with water cannons and pepper spray, only to see protesters erect another blockade down the road.

Some groups were practicing conflict situations, should the police elect to clear the road. Others were lounging in makeshift hammocks in the trees. Big clumps of razor wire, which had been ripped off the top of the fence the night before, lined parts of the road. And everywhere more and more people streamed towards the fence.

In the distance, helicopters circled. There were reports that a blockade on the other side of the summit venue was being cleared by the police.

Indeed police have said that 220 arrests have been made. But on the east side, it looks to be nap time. Many of the demonstrators are planning to stay the night.

Bob Geldof and Bono met with Angela Merkel at the G-8 summit in Heiligendamm Wednesday. But they weren't happy about her "wait and see" attitude on aid for Africa. Meanwhile Bush expressed his support for "Bono for president."

Ireland may not be a member of the G-8 but two of its most famous sons are at the gathering of world leaders to lobby on behalf of Africa. Rockers Bono and Bob Geldof met with German Chancellor Angela Merkel on Wednesday at Heiligendamm --but came away disappointed, saying they were far from hopeful of an agreement on aid to Africa at the summit.

The two rockers said on Wednesday that the talks had been tough. "We agree on the goal but now how to get there," Bono said, adding that anti-poverty campaigners were losing patience with the German leader's "language of wait and see."

The men want German and other G-8 countries to live up to their commitments to boost foreign aid spending to 0.7 percent of GDP by 2015. Currently Germany only spends 0.36 percent. The U2 frontman said: "We have to educate the German people," who want to help Africa and Geldof urged Germany to seize the moment and be "bold" in its approach to Africa.

Bono said that Merkel was an "honorable person" but that he wanted to see "the visionary side of her and we saw the practical side." He said he found it difficult sometimes to believe her when she said "trust me."

"Hanging out in good company, aren't I?" Bush quipped. It seems even the president of the United States can get a little star-struck -- earlier he had shouted to an aide: "Where's Bono? Bono for president!"

Bono is to join other stars to sing at an anti-poverty concert in Rostock on Thursday. The "Voices Against Poverty" concert will also feature Geldof and N'Dour alongside German acts Die Toten Hosen and Herbert Grönemeyer, as well as artists representing the world's eight poorest nations.

Detour to the Dark Side 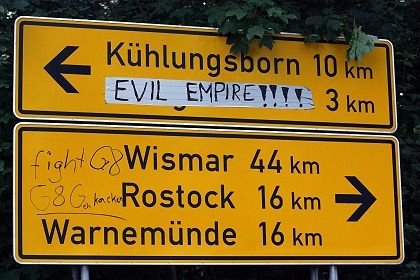 A road sign directs drivers to the "Evil Empire" instead of Heiligendamm.

Will those anti-G-8 protesters stop at nothing in their quest to bring down the military-industrial complex? After Wednesday's blockades and sit-down protests, demonstrators have resorted to no-holds-barred semiotic warfare in their war on capitalism.

On Thursday morning, a road sign to Heiligendamm was found to give directions to the "Evil Empire" instead of to the seaside resort which is the summit venue.

However hawks in the American delegation might interpret the mis-direction as a satirical statement on Russian President Vladimir Putin. The phrase "evil empire" was used by Ronald Reagan in the 1980s to designate the Soviet Union, then the US's arch-enemy. If the superpowers really are on the brink of a new Cold War, as many have suggested with an eye to current tension between Bush and Putin over the US's planned missile shield in Europe, then the phrase may soon be retrieved from the dustbin of lexicography. 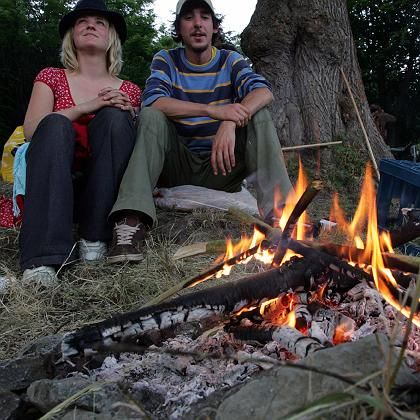 Demonstraters gather around a camp-fire on Wednesday evening.

As afternoon settled into evening Wednesday, roads near Bad Doberan were lined with weary protesters returning from battle with police. Thousands left the blockades in front of the gates of Heiligendamm for Camp Reddelich, the main protest camp at the G-8 -- not because they were dispersed by police, but simply because they hadn't thought to prepare to spend the night -- a consequence of having been too successful on the first day of demonstrations.

"We were really surprised by our own success," recounts Paul Adler, a student who flew from Madison, Wisconsin to participate in the protests. "These are the best-planned protests in years. We were scared yesterday, but now we know that we outnumber the police, and that we can outsmart them."

Indeed, the consensus at Camp Reddelich was that the day had gone better than expected: protesters had evaded police, reached the fences surrounding Heiligendamm, avoided violence (at one point inventing a chant to warn fellow activists not to pick up stones along a stretch of train tracks) and, for the most part, managed to avoid injury and arrest.

And the notorious black-clad Black Bloc seemed to have been a positive influence, rather than the destructive influence many people feared: by cutting a barbed-wire fence near one of the blockades, the anarchists gave thousands of other protesters more breathing room as police brought in mobile water cannons.

Nevertheless, the camp was abuzz with nervous energy on Wednesday evening. At the camp's independent media center, a steady stream of demonstrators were reporting alleged police abuses in progress. And no one was willing to predict what the next few days would bring.

"I think the police will certainly change their tactics," says Kevin Smith, a British climate researcher and a resident of Camp Reddelich. "In 2005, in Gleneagles, the police actually surrounded the protest camps and prevented people from leaving." The possibility of being barricaded into the camp was, no doubt, going to be fodder for a lot of heady discussion in the nightly camp meeting, as well as at the smaller meetings organized by the camp's many sub-divided "neighborhoods".

And cracks of tension were arising between different groups of activists. A number of activists returning from the "Alternative G8 Summit" -- a series of lectures, and workshops on progressive themes organized in the city of Rostock -- returned to Camp Reddelich upset that the blockades seems to have dominated the day's events. "Everyone is talking about confrontations with the police right now, but no one will remember them in a week" says Katja Albrecht, an activist who spent the day in a workshop on global trade policy. And an ongoing feud continues to simmer between anarchists and strictly "peaceful protesters".

But, with the last few hours of daylight, most activists seemed intent on restoring their energy, relieving their sunburn and enjoying themselves. Many protesters proudly recounted the day's highlights to one another. (The most commonly referenced triumph: that protesters had forced G-8 organizers into "Plan B" -- shuttling journalists and other members of visiting entourages into Heiligendamm with helicopters and boats -- because roads and rail were blocked). Others simply grabbed a beer and a plate of vegan food prepared at the camp and headed for a live music concert on the field opposite the camp.

Other people, though, couldn't wait to get back to the demonstrations. Among them was Paul Adler: "I'm going to head back to the blockades, as soon as I get enough food and water for myself and for other people."

Unlikely Allies on the March

The anti-G-8 protest movement is a conglomerate of various groups. Just how unlikely the bedfellows are could be seen on Wednesday.

On Wednesday morning, a number of protesters in Camp Reddelich got a late start on the march to Bad Doberan. Among them were a crew of black-clad anarchists and a group of orange-clad Hare Krishna devotees, who had decided to travel together. It wasn't long into the march before the anarchists decided to hurl stones at police stationed a few dozen meters away.

Alas, when push came to shove, the group solidarity dissolved like so much incense ash. Those in black bolted into the adjacent woods, while those in orange stood in place and began chanting "Hare Krishna". The police let the chanters continue their mantra and tried their best to chase the suspected anarchists.

Discouraged, the spiritual activists decided to turn back to Camp Reddelich. "We're here to save people's souls," says Maria Cristin, among the Hare Krishna activists -- something which makes it difficult, it appears, to team up with anarchists trying to break other people's bones.