There is no doubt that German Foreign Minister Frank-Walter Steinmeier has been called many names. After all, he's a politician. But he probably wasn't expecting to be described as "the pimp" by a buxom 22-year-old law student from the Berlin area. But that's exactly how one fan of the leader of the Social Democrats apparently sees the 53-year-old politician. And she does so in what would best be described as a "political music video" that has been doing the rounds of the German media over the past week.

In the professionally produced video first posted on SevenLoad, a German competitor to YouTube, the law student, who won't give her real name and who is therefore known only as the "Steini Girl," sings of her devotion for the leader of the opposition. The title of the video is "I've Got a Crush on Steinmeier" -- it's reminiscent of a series of similar videos that came out during the American elections, starring a similarly well endowed young lady and called "I've Got a Crush on Obama." The Obama viral videos were first posted by an America Web site, Barely Political, which specializes in political satire and many commentators have noted that the Steini Girl is just the latest in a series of gimmicks that the Germans have copied from the American presidential elections.

In the German music video, the Steini Girl, dressed in shorts and a tight singlet, poses provocatively outside various government buildings and Berlin landmarks. She lolls on grass and kisses Steinmeier's picture, whispering, "come under the blanket, my little toy boy," before crooning seductively that the politician's "white hair and slight squint really made her click." In the chorus she repeats that Steinmeier is "strong" and "ready," the epitome of masculinity, a new power in the land. Steinmeier's opponents -- German Chancellor Angela Merkel of the Christian Democrats (CDU) and Guido Westerwelle of the Free Democratic Party (FDP) -- get a mention too. "Angie is too masculine, Guido is too feminine," the Steini girl complains mid-song, adding that "Steini" and his plans for Germany drive her crazy (and one assumes that's with desire).

SPD And Steinmeier: It Has Nothing To Do With Us

Steinmeier's party has been quick to distance themselves from the video and they say they had nothing to do with the making of the clip. Steinmeier himself didn't want to comment and some analysts have even commented that it's the sort of thing that might turn voters off. So it took a day or two -- there were headlines like "Who Is the Steini Girl?" and some even speculated that it was an anti-SPD ploy by their political opposition -- but eventually the truth came out.

The Steini Girl was created for the Cologne-based SevenLoad Web site and was part of programming for their youthful Internet-TV channel Wahlzeit (in English: Election Time). "The Hamburg-based company "27 KM Entertainment" is responsible for the production," Germany's Süddeutsche Zeitung newspaper reported on Friday. But officials at the small production company said they were not intending to poke fun at the SPD. The video came about, the company said, because the Steini Girl approached the PR agency. "We were pleased to help her," a spokesperson for the company told the newspaper. "The girl suited the video perfectly," Christian Suhr, one of the film makers told SPIEGEL ONLINE. "But we didn't make the video with any (political) goals in mind."

'Singing About Politics Has Had A Profound Impact On World History'

When the Steini Girl herself was interviewed she explained that a friend who had been in the United States last year had reminded her of the "I've Got a Crush On Obama" videos and suggested she make something like that herself. " And you can see it in the video," she told SPIEGEL ONLINE. "It's almost exactly like the Obama Girl videos."

The Obama Girl herself -- Amber Lee Ettinger, whose videos went on to be viewed over 10 million times and who went on to minor success on US television -- congratulated the Steini Girl, saying that "everybody knows that singing about politics has had a profound impact on world history. So it's great to see you playing a role in German politics. I can't wait to see what Obama and Steini get to do together."

In a further online interview, the Steini Girl would not disclose what party she might be voting for come Sunday but she did say that, in her opinion, "Steinmeier just comes across better." What the young SPD fan, who apparently already has a boyfriend, would most like to see come from her online performance, she said is a good voter turnout on Sunday. "And maybe," she added hopefully, "a couple of lucrative jobs for me." 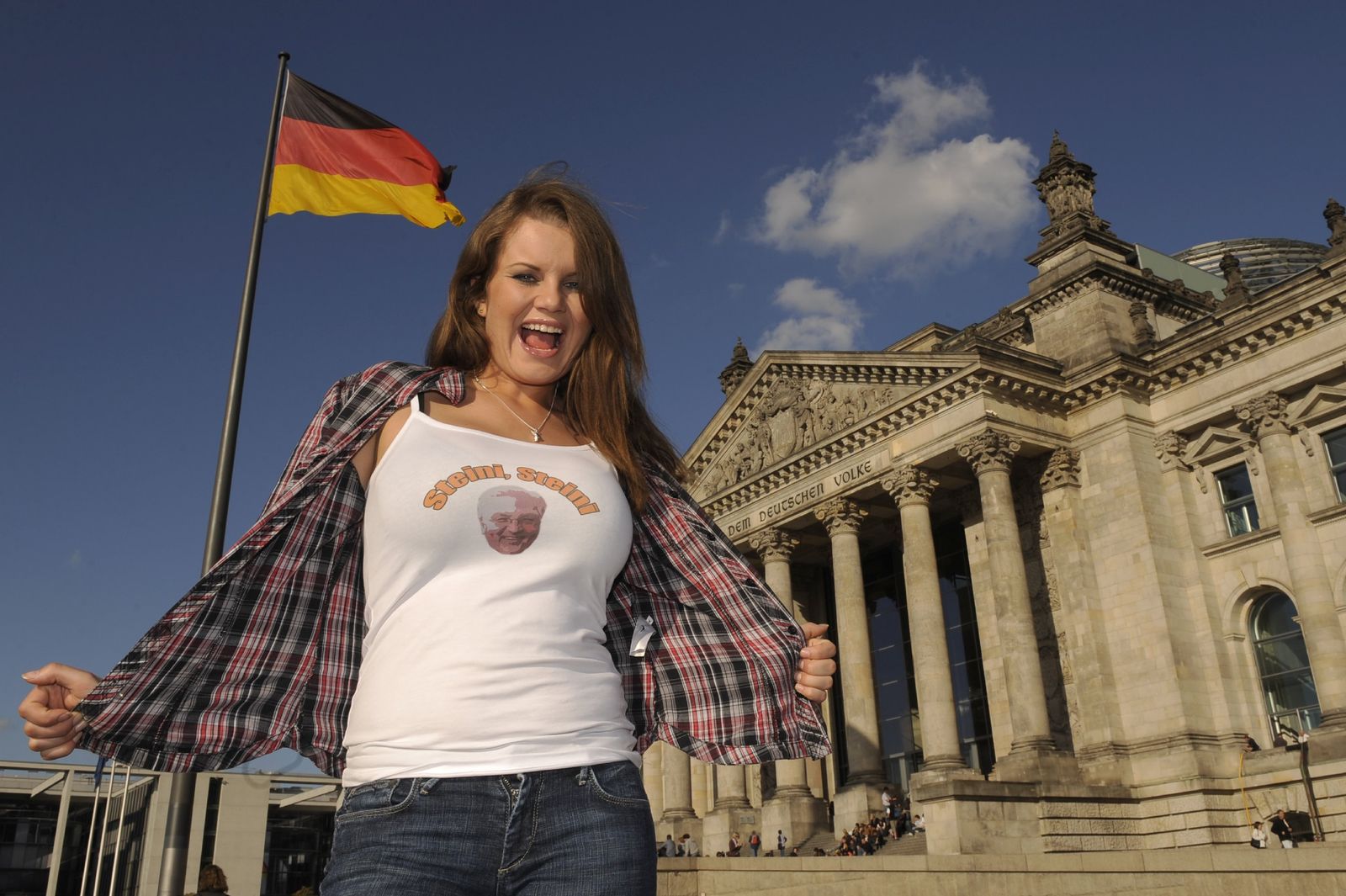 The Steini Girl poses in front of the Bundestag. She says she never expected all the attention her online video homage to Frank-Walter Steinmeier is getting.