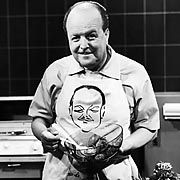 He prepared poached eggs, stuffed strawberries with almonds and is credited with inventing "Toast Hawaii," a concoction -- exotic enough to Germans of the day -- of toast topped with canned pineapple, a slice of melted cheese and a cocktail cherry.

His name was Clemens Wilmenrod, and he was Germany's first TV chef. Wilmenrod, who was born in 1906 and met a tragic end in 1967, was a friendly figure from the Stone Age of television. Today, Wilmenrod is remembered less for the dishes he prepared and more for the endless stream of chatter that accompanied his kitchen antics. He elevated nonstop talking to a TV virtue and captured the attention of his viewers -- especially women. In short, Wilmenrod was a seminal genius of modern television.

Now Wilmenrod is returning to German screens in a new TV movie, "Wilmenrod: It's on the Tip of My Tongue." He will be played by the actor Jan Josef Liefers, well known to German viewers as a forensic pathologist on the hugely popular crime series "Tatort." On the show, Liefers' character chats away as he slices up corpses -- suitable experience, perhaps, for playing the voluble TV chef Wilmenrod.

On this day of shooting at a studio in the town of Bendestorf outside Hamburg, Liefers is sporting Wilmenrod's trademark mustache and the chef's famous apron, which featured a caricature of himself. Liefers delivers lines by the TV chef which have been preserved for posterity. They have an unmistakable blend of linguistic heavy-handedness and sophisticated nonsense.

"The fruit preserved in rum spreads its aroma of warmth and fidelity throughout the house," he enthuses, describing the Rumtopf ("rum pot") dessert which he helped to popularize. "When you make the occasional trip down to the cellar to perform some terribly mundane chore, there the fruit is, standing in the corner in its colorful earthen jug, beckoning like an old friend. How could anyone even think of leaving the cellar behind without having greeted that silent, delectable companion, waiting patiently in its dark corner?"

A less subtle actor than Liefers might have been tempted to play the logorrheic chef for laughs. Instead, Liefers is careful not to make fun of Germany's first TV chef or, for that matter, mock the atmosphere that characterized 1950s and early 1960s Germany.

The new biopic reflects a new interest within Germany in the post-war era of the "Wirtschaftswunder," or economic miracle. Of course, from today's perspective, there was much to ridicule about that upwardly mobile era: its bourgeois fashions, its penchant for the kitsch and eccentric, and its tendency to repress the darker aspects of life, including the Nazi era and sexuality. 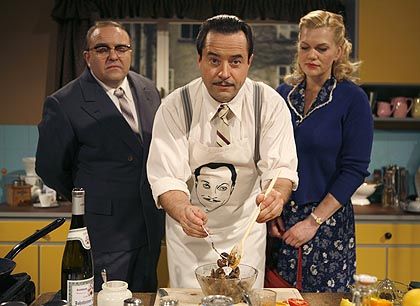 The TV movie "Wilmenrod -- It's on the Tip of My Tongue" pays homage to the 1950s celebrity.

The talkative chef Wilmenrod reminds Liefers of someone like the German author Karl May, who wrote hugely successful novels about the American Wild West without actually having visited the US. Like May, Wilmenrod added color to the drab grays of ordinary German life with his outlandish-sounding dishes, which included such treats as his signature "Arabian Horseman's Delight" (a glorified hamburger), "Rabbit Stew à la Urban" and "Salad à la Durieux." The last was a concoction of onion, vinegar, lemon, Roquefort cheese and salad greens which the dish's namesake, the Austrian actress Tilla Durieux, hopefully never experienced.

Wilmenrod, the son of a miller from the western German region of Westerwald, had grasped that sometimes the most important aspect of cooking was talking about cooking.

With a speed that would be unheard of today, Wilmenrod in 1953 managed to convince network boss Werner Pleister that television shouldn't only feature variety shows and serious programs, but also a cooking show. And Wilmenrod, then a minor actor, told Pleister that he wanted to be the chef. Only the UK's BBC had ever done anything similar, in test broadcasts before the war.

Without any lengthy deliberation in committees, Wilmenrod's plan, which was actually the idea of his enterprising wife, was added to the schedule. His first cooking show aired in February 1953 -- a good decade before Julia Child ever appeared on American TV. It was a milestone in television, marking the beginning of television's discovery of its consumers, a process that has continued to this day. His show went on to become one of the most popular on West German TV.

But in Germany, successful people will always find someone ready to rain on their parade. Wilmenrod's downfall was his adoption of surreptitious product placement. The "pretend chef," as SPIEGEL christened him in a 1959 cover story, began accepting fees for singing the praises of products from certain companies.

His economic clout was considerable. "Hausfraus who have watched him operate in his gleaming white, gadget-spangled kitchen have developed statistically measurable yearnings for what West Germans call an 'American kitchen,'" wrote the US magazine Time in a 1959 story on the chef. "Once, after he casually made use of a vegetable slicer called Schneidboy, sales of the gadget soared to 1,500,000."

Wilmenrod is even credited with popularizing the turkey as a Christmas dish in Germany. SPIEGEL in 1959 talked of a "wave of turkey triggered by Wilmenrod."

But Wilmenrod had lost the innocence he had once enjoyed as a pioneer. His theatrical linguistic flourishes and his flowery way of greeting his audience ("My dear, delightful friends") could no longer cover up the fact that he was practically sawing apart a turkey instead of carving it properly. His charm began to fade.

In 1967, with his popularity declining and his marriage over, Wilmenrod shot himself in a hospital at the age of 60, believing himself to be terminally ill. An obituary in SPIEGEL quoted the chef in happier days imagining a far different end: "It would be nice to get slowly plastered in a castle on the Rhine and then slide across into the other world."