German Foreign Minister Heiko Maas had been scheduled to address reporters on Wednesday afternoon together with his Greek counterpart Nikos Dendias. But the press conference was cancelled at the last minute.

Why? Because of events on the other side of the Atlantic. With the race between U.S. President Donald Trump and his Democratic challenger Joe Biden still undecided, Maas wanted to avoid being in a position of having to comment on the election.

In the early evening, he admitted as much on Twitter: It was too early to comment on the vote count in the United States. "Turnout was high, unfortunately so too was the polarization. That's why it is important that all politicians establish trust in the election process and results." He said that patience was necessary, and that America is a strong democracy. "The country's institutions and its rule of law have proven several times in the past that they function even under difficult conditions," Maas wrote.

Angela Merkel's spokesman only said that the chancellor was following developments closely.

A few hours earlier, before it became clear that the 2020 presidential election was going to be a nail-biter, Maas went on German public broadcaster ARD and repeated the standard diplomatic line: No matter who wins, the trans-Atlantic relationship must be patched up. "We need each other."

That remains true. But the German government and the rest of the Berlin political establishment is now looking across the Atlantic with deep concern. Will the opportunity even present itself to patch things up? On Thursday morning, it was looking increasingly like Biden would win, but it remains unclear how far Trump might go to challenge the results, or even if Biden's apparent lead will hold up. Few in Berlin can stomach the thought of four more years of Trump. But even if Biden wins, will the American democracy emerge unscathed from this election and the last four years of Trump?

Of particular concern, of course, is Trump's triumphant claims to victory on Wednesday morning, German time, despite the fact that millions of votes were left to be counted. He also announced his intention of going to the Supreme Court to challenge the counting of mail-in ballots. Trump, it would seem, is continuing to play by his own rules.

None of this should come as a complete surprise, of course. Trump, as everyone knows, is capable of anything, and he is also only doing what he had threatened to do in the run-up to the election. Still, now that he is actually pursuing that course of action, it has still come as a shock to German political leaders. German Defense Minister Annegret Kramp-Karrenbauer, head of Merkel's Christian Democratic Union (CDU), said it was an "explosive situation" and that she was concerned about a "battle over the legitimacy of the outcome."

Niels Annen, a state minister in the Foreign Ministry, told DER SPIEGEL that particularly from partners and allies, there was an expectation that the fundamental principles of democratic elections be accepted and upheld. But he also warned Germans to be patient. "For Germany and Europe, it ultimately doesn't matter if the winner of the U.S. presidential election is decided today, tomorrow or in two weeks." The most decisive thing, he said, is that the president "is elected in accordance with the democratic rules and is accepted by all."

Germany "would face a heightened need to more decisively defend all that Trump calls into question."

It is hardly a secret that Berlin is hoping for a Biden victory. But what if things turn out differently? The German government has, of course, worked through and made plans for that scenario. But even if Biden wins, noted Peter Beyer, the government's trans-Atlantic coordinator, on the eve of the election, there are high expectations of Germany to take on a more active leadership role. And if Trump does win, Beyer noted, it wouldn't make life any easier for Merkel.

Norbert Röttgen, chair of the Foreign Affairs Committee in the German parliament and a candidate to take over leadership of the CDU, was more vocal. In the event of four more years of Trump, he expects "an escalation of what we have thus far experienced." Trump, he warns, would be "completely unleashed" and Germany "would face a heightened need to more decisively defend all that Trump calls into question."

On Wednesday night, Röttgen then went on CNN to speak with Christiane Amanpour and said it filled him with "great sadness" to see Trump challenge the basic rules of democracy. He described the incumbent president's behavior as "awful."

The criticism of Trump coming from Germany is not surprising. Trump has deeply undermined the German-American relationship from day one. Early on in his tenure, it was hard for German foreign policymakers to even find someone to talk to in Washington, a situation not helped by Trump's early-term decisions to replace his secretary of state and secretary of defense. There has been some continuity since 2018, when Mike Pompeo took over the State Department, but that hasn't necessarily helped strengthen trans-Atlantic ties.

Even more challenging is the fact that Merkel and Trump never managed to find any sort of productive connection, neither professionally nor personally. For Merkel, Trump's brand of politics is both abhorrent and difficult to deal with. And there are several reasons for that:

The Democrats, of course, are likely to send a similar message on some of those issues, including the Nord Stream 2 pipeline and even the Iran deal. Still, German political leaders are almost certain that a Biden victory will result in an improvement in the trans-Atlantic climate.

"Europe would have to come closer together" and "defend itself from the Trump regime."

Plus, the German foreign policy establishment is familiar with Biden's advisers since many of them worked for former U.S. President Barack Obama and for Hillary Clinton when she was Secretary of State. "There are excellent contacts," said Peter Wittig, former German ambassador to the U.S., on the German broadcaster RTL. Nils Schmid, a foreign policy expert with the center-left Social Democrats, says that if Biden were to win, he expects "a strong signal to Europe" right at the beginning of his presidency.

The EU and the "Trump Regime"

Röttgen of the CDU tends to agree. "One thing would change immediately: We would once again treat each other sensibly." But Röttgen also warns that areas of conflict will remain no matter what, specifically mentioning Nord Stream 2 and U.S. demands for more defense spending in Berlin. Still, most foreign policy experts in Berlin believe that the challenges would be much smaller with Biden in the White House.

Jürgen Hardt, another foreign policy expert with the CDU, said on German television that he has recently been assured by his Republican counterparts in Washington that Trump would take a different approach to foreign policy in his second term. Trump, he says he was told, wants to go down in history as a "good president." Hardt, though, said on the show that he "wasn't convinced."

Former SPD chairman Martin Schulz, who ran against Angela Merkel in the last German election, was more pointed in comments made during DER SPIEGEL's election night coverage. Trump, he said, "doesn't give a shit" about international relations. Schulz, who was also president of European Parliament for many years, said that if Trump were to win, Europe would have to "come closer together" and "defend itself from the Trump regime."

European unity, though, is anything but a given these days, as could be seen on Wednesday afternoon. Slovenian Prime Minister Janez Janša, a right-wing nationalist, prematurely congratulated Donald Trump on his election victory. "It's pretty clear that American people have elected @realDonaldTrump @Mike_Pence for #4moreyears," he wrote on Twitter.

The German right-wing populists with the Alternative for Germany (AfD) party agreed. AfD foreign policy specialist Armin-Paulus Hampel said the atmosphere within the party on Wednesday afternoon was cheerful and relaxed at the prospect of four more years of the incumbent.

Proving that even in the German parliament, there are those who support Donald Trump. 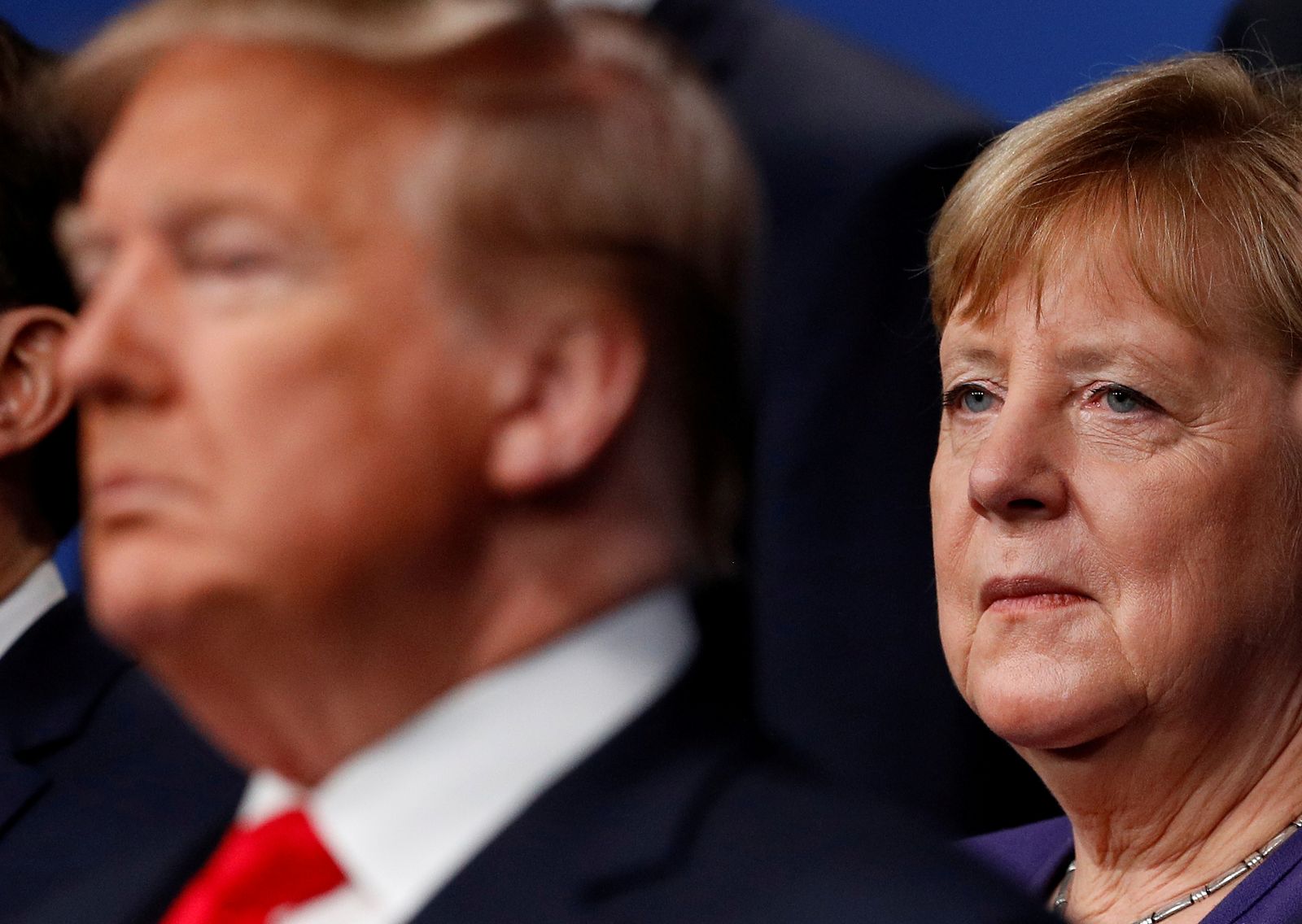 Trump and Merkel at the NATO summit in December 2019.