Richard Simmons says he knew a few spies in Berlin back in the 1970s. "Everyone spied at some point for someone," he says of the Cold War era. And why, Simmons admits to sometimes wondering, should something that was considered normal back then be seen as unacceptable now?

Simmons gazes into the urban canyons of New York City; not far away, the Golden Gate Bridge arching through the air. At the German-American Folk Festival in Berlin, prints of America's most impressive sights are on display. Sand has been spread out to create a beach-like atmosphere and flower pots have been carefully wrapped in the colors of the US flag. Palm trees dot the landscape.

Simmons, 67, is sitting in front of the hamburger stand he operates. He's wearing a casual shirt and his accent when he speaks German quickly betrays his American origins. When he talks about the fair, which is now celebrating its 54th year and is meant to be a celebration of German-American relations, what comes out is a story of rapprochement and transience.

Earlier, the fair had been held in the American-occupied sector of West Berlin, where US soldiers were stationed and lived alongside their German neighbors. Germans came to the carnival in droves. At the time, they were still grateful for Germany's liberation but particularly for the Berlin Airlift, which had seen the Americans deliver provisions to the city after land routes were completely cut off by the Soviet Union in 1948. It was a time when there were clear boundaries between friends and foes. The final day of the first German-American Folk Festival was on August 13, 1961, the day construction of the Berlin Wall began.

Simmons, came to Berlin a decade later with the US Army. He learned to love German bread and also met his wife Irene here. An American general had invited all the people who had helped out with the fair to join him in a festival tent. Irene, the daughter of a carnival showman from Berlin, had just returned from vacation. She was tired and didn't feel like going to the reception, but her mother made her. Simmons, an officer from Wyoming, had just helped put out a fire on the Army's property. He still smelled like smoke and also didn't feel like attending, but his boss told him to go. While dancing, he kept stepping on her feet. Fortunately, he had other talents, and somehow the man from Wyoming and the woman from Berlin became an item. They married in 1975 and two years later Simmons joined his father-in-law's business and took over operations at the German-American Festival.

At the time, West Germany and the United States were facing the first major postwar crisis in their relations. Many West Germans were protesting against the US war in Vietnam while many others, around 500,000 annually at the time, attended the annual fair, which was then held near the barracks in Berlin's Dahlem district. They came because they liked the United States or American music -- or maybe even its beer.

Simmons always felt there was a political dimension to the carnival. "The fair was a place where we could teach the Germans what we think and why we think that way," he says. But in 1994, a few years after German reunification, the US Army withdrew from Berlin. And now, 20 years later, with Germany's big brother having been exposed as Big Brother through the recent revelations of NSA spying, there are fewer people around to explain just how it is that America is thinking these days.

Simmons still tries. "A large country has to protect itself," he says. "And America knows that a friend can very quickly turn into an enemy."

His wife then sits down next to him as they both sip from bottles of Arizona Iced Tea. "Merkel has to assume that, in her position, she can't even go to the bathroom without being observed," says Irene, 63. She says its one thing to feel as Edward Snowden does that the NSA is too powerful and that it had no business snooping on Merkel's mobile phone. "But it's not appropriate to go public with that," she says. Irene has had a relationship with the United States for the past four decades; she understands how America thinks.

But it has become a lot harder to understand how Berliners, or perhaps even all Germans, think these days. They don't appear to know who their real friends are. Three years ago, the annual festival was driven out of Dahlem and a luxury apartment complex has been built on the carnival's former grounds. Fair organizers found a refuge in the central Berlin quarter of Moabit, once part of the sector occupied by the British. Some stand operators had reservations about the new site. Simmons rented a giant Ferris wheel in order to make it more visible in a city that isn't lacking when it comes to these types of fun fairs. A short time later, he declared bankruptcy and had to transfer operations of the fair to new owners. Now, he and his wife only run three stands selling hamburgers, hot dogs, iced tea and beer.

Once again this year, the smell of tar is mixing in with the scent of burgers on the grill. Construction sites are sprouting up all around, part of Berlin's new Europa-City office park development. Once again, it looks like the event will have pull up its stakes and move. One might argue that America is getting pushed around the city -- and it's not a country that likes to be pushed.

The last time the German-American Folk Festival moved, stand operators had hoped to relocate to the site of the city's former Tempelhof Airport. And it is a hope they have not abandoned. As the airport where many of the Berlin Airlift flights landed, it is seen as the spiritual home of German-American relations. "My sister was born in 1946," says Irene. "Without the Americans she would have starved in Berlin." But the city government ruled that the plan would violate the "need to protect neighbors." For the Simmons, the idea that Germans need to be protected from their former protector was an entirely new concept.

It was pouring rain at the opening of this year's fair and visitors sought shelter under cafe umbrellas. It felt as if the closing credits were running for the event and that this might be it. Both the US ambassador and the Berlin mayor had been invited, just as in earlier days, but neither came. The embassy sent its press attaché and the city sent a low level official. But he showed up too late for the opening ceremonies. 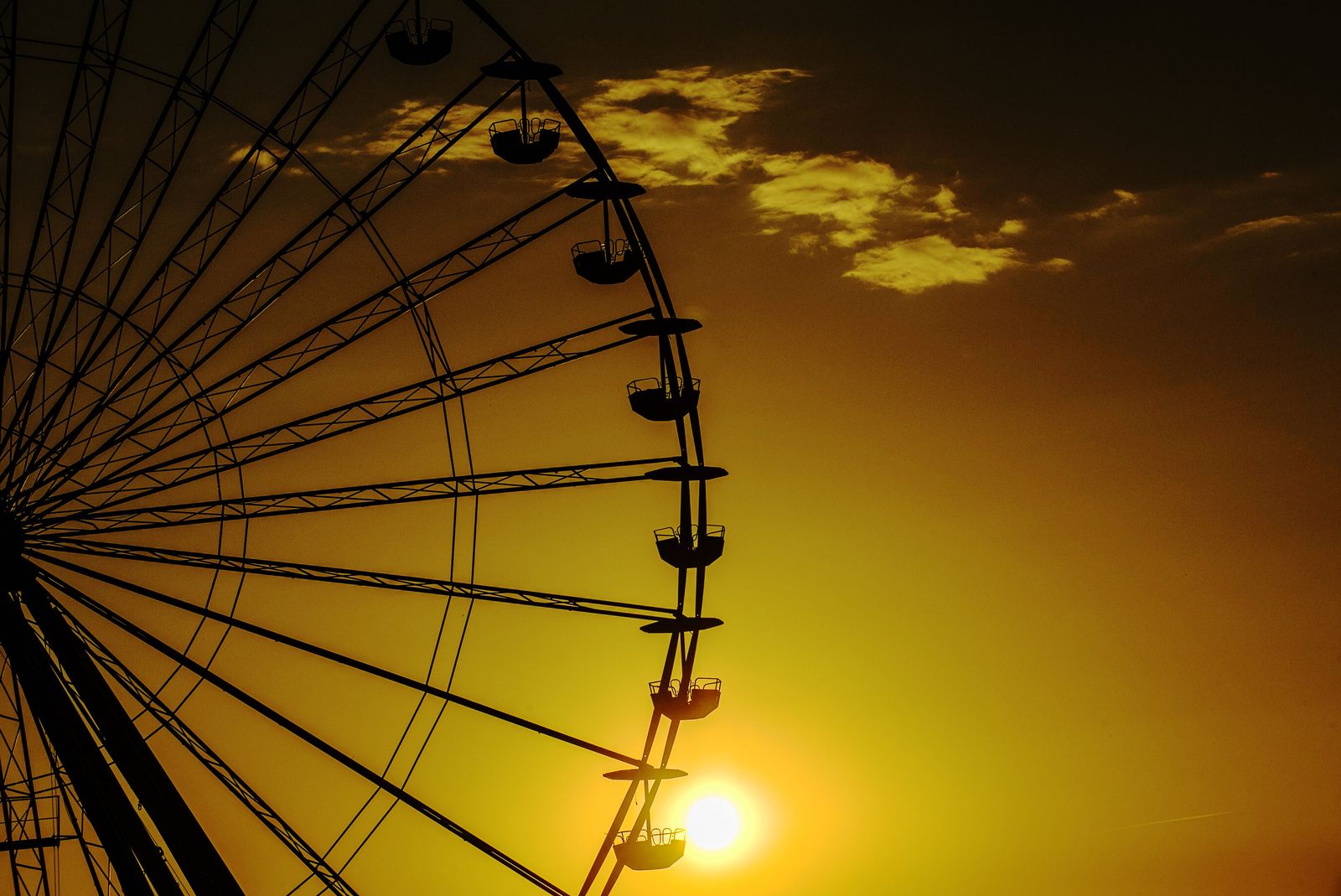 The German-American Folk Festival has been going for 54 years now. But it is suffering along with relations between the two countries. 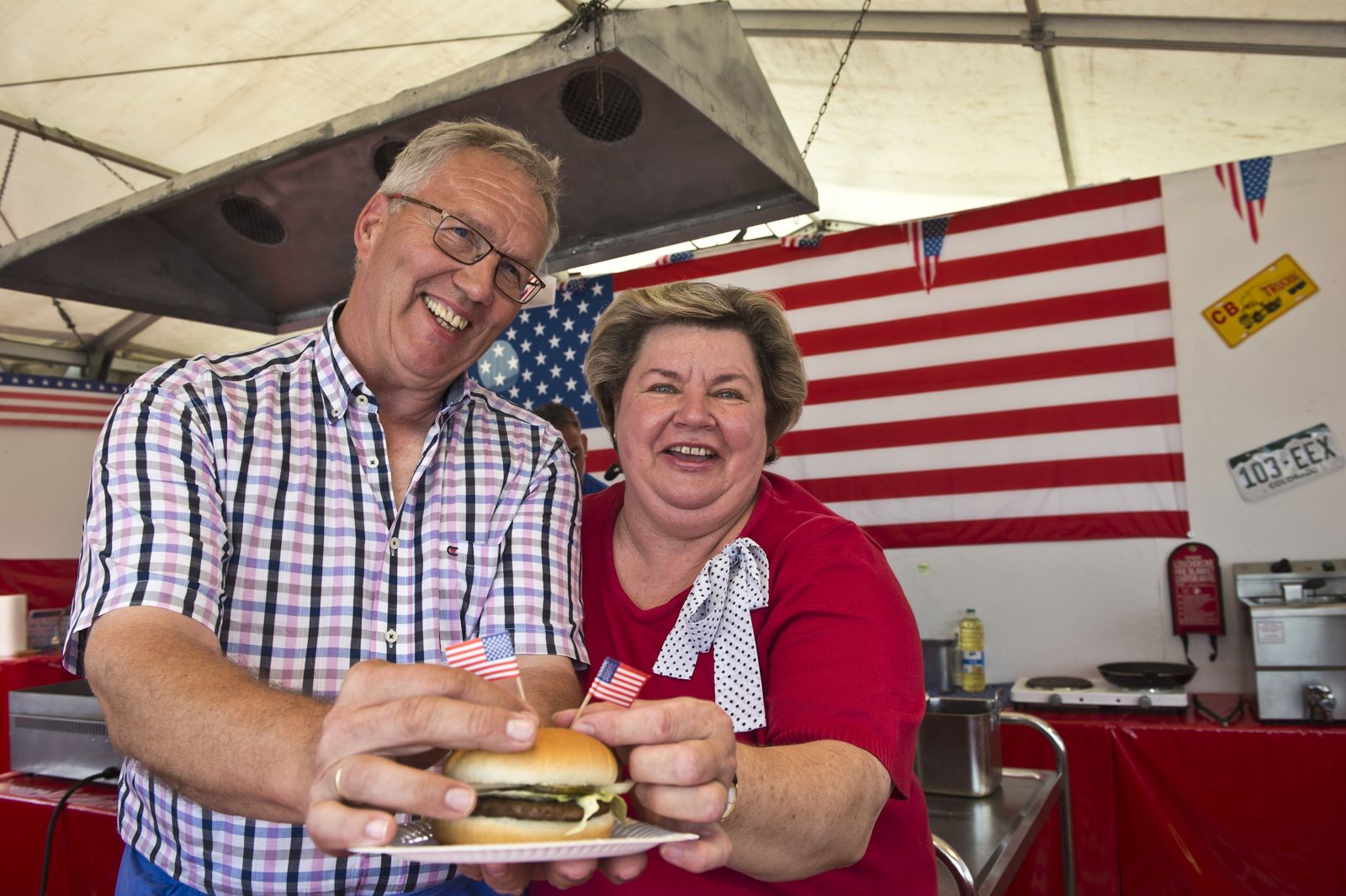 Richard Simmons and his wife Irene operate a hamburger stand at the German-American Fair in Berlin, a carnival that has seen better days.