Less than a day after an ethics commission appointed by German Chancellor Angela Merkel determined that Germany could phase-out nuclear power within a decade, the government in Berlin moved to implement plans to shut all the country's atomic reactors. Under the new plan, all German reactors would be forced to go offline by 2022.

It was yet another about-face in the recent history of government nuclear power policy. After the Fukushima disaster in Japan in March, Merkel swiftly reversed controversial legislation passed by her government in October that had extended the lifespan of the country's nuclear power plants by an average of 12 years. An earlier government led by then-Chancellor Gerhard Schröder and the Greens had previously passed legislation that would phase out atomic energy entirely in Germany.

Following the nuclear catastrophe, Merkel ordered that seven nuclear plants be taken offline for a moratorium period of at least three months until the government had the chance to reconsider its position. Those plants will now remain shut down, as well as an eighth plant which had already been temporarily closed prior to the moratorium.

Although Merkel often described nuclear energy as a "bridging technology" until cleaner sources could be found, her shift was seen as nothing less than a 180-degree turn for her government. Many saw it as a cynical election ploy, coming as it did just days before pivotal state elections that her party ultimately lost, anyway. Weeks on, however, the majority believes the chancellor had no other choice given the broad consensus in the German populace that nuclear power has no place in the country. That sentiment is expected to be codified by the German parliament on July 8.

But despite the massive popular support, there are still clouds on the horizon for Merkel. Already, Germany's major energy utility companies, for whom operating nuclear power plants has been the equivalent of being able to print money, are threatening to sue over lost revenues potentially reaching into the billions as a result of the atomic shutdown.

German editorialists are split over Merkel's nuclear withdrawal plans. Many left-leaning publications fête the development, whereas conservative newspapers are asking if society can really afford the price tag that will come with green energy.

"The reaction was predictable: The bosses of German industrial groups, particularly the energy utilities, are moaning about the decision to undergo an accelerated nuclear phase out like children who don't want to go on a day trip. They did this before the decision was made; they will probably do it for a while yet, until the heads of these firms comprehend what enormous opportunities are on offer in a world in which they have become the first mover on renewable energy and therefore are the market leader in the underlying technology."

"After the -- relatively -- clear decision, it is time to grasp the end of nuclear power in Germany as an opportunity, not just as a loss. The phase-out offers enormous opportunities if it is seen as a transition, or even as an entry into the potentially economically rewarding solar age. If it is dealt with properly, Germany will be at the vanguard of changes that, thanks to the planet's limitations, every nation on Earth will need to undergo at some point. It will be a turning point that marks an end not only to Germany's nuclear plants, but also to energy produced by consuming resources in general."

"Given the size of the task ahead, it seems almost ridiculous when politicians bicker whether three of the nuclear power plants should be running until 2022 instead of 2021, or whether one reactor should be retained as a "cold reserve" (and it is unclear how this could function)."

"The exact exit date is less important than the accompanying, much larger tasks. Germany must now make its own energy consumption more efficient, and increase the already impressive share of renewable energies. It is by no means about a forced surrender or 'green woollen sweater' ideology, but about modern, cutting-edge technology."

"The main difference between the nuclear phase-out law passed by former Chancellor Schröder eight years ago and that agreed on by Merkel's government on Sunday night is that there is no longer a chance that it will be reversed. ... The electorate's memory may be short, but since the nuclear catastrophe in Fukushima, it is impossible in Germany to mobilize a majority in favor of a return to atomic energy."

"This cross party and societal consensus is an enormous opportunity, particularly for energy firms. The debates will be bitter and protracted when it comes to how the transition into a nuclear-power-free era might look in detail and who has to pay for what. But the crude framework which has now been erected already offers one thing: legal security. Particularly for companies in a sector like energy which must make long-term investments, that is of inestimable value."

"No one can accuse the German government of inaction. Within a matter of months, the government has taken consequential action following the nuclear meltdown at Fukushima. … But were they the right decisions? After all, German prosperity and millions of jobs in the country are dependent on affordable energy. In that regard, there are a frightening number of questions left unanswered. Will sun, water and wind be able to provide us with ample and reliable energy? Who will build the needed new power masts? And what share of the costs will have to be picked up by renters and homeowners? The government has acted on the behalf of voters, but who will be forced to pick up the tab in the end?"

"Following the Japanese disaster, Merkel had nothing left to win. Sticking with the extension of nuclear plant life spans would have been political suicide. Even the chancellor's (harshest critics) would have agreed that the Social Democrats and Greens would likely get elected as the next government. It doesn't require much imagination to figure out what their first decision might be."

"But even the 'shift' (away from nuclear energy) does little to help Merkel politically. Abroad -- especially, but not exclusively, in the Middle East -- the German government's swing on energy policy (after its abstention on the UN Security Council vote on creating a no-fly zone in Libya) is being seen as yet another sign that the chancellor isn't as iron-cast as many like to think. Critics within her own party once again see the affirmation of their assumption that in questions of stability, Merkel shows considerable mobility -- often in ways that are detrimental to her own party. So far, voters aren't rewarding the Christian Democrats or the Free Democrats in the coalition government for doing what the majority of voters would like them to do, either."

"The ingratitude will continue because the next thing Merkel's government will have to do is open the envelope with the bill in it. The upgrading of Germany's energy supply, related costs and the necessity of greater energy saving will hit or at least be felt by all -- car and home owners, renters, environmental activists and companies. This project will change the entire country, and it will only be possible to know what the actual costs and undesired consequences will be once it is finished."

"Why is no one in Germany celebrating the government's nuclear phase-out plans? It's all over the headlines around the world, but here in our own country no one really knows how to react. … The U-turn that Merkel and her government were forced into could not have been any more dramatic. Just half a year ago, Merkel had decreed that the reactors would stay online until long after 2030 -- now half of them are already off the grid."

"It is a huge victory for the anti-nuclear movement, which had promoted alternative sources of energy with great tenacity and kept the discussion alive. That was the reason why the electorate was so determined (to get rid of nuclear power) after the Fukushima disaster and forced Merkel to reverse her position. … The energy revolution can finally be taken to the next level."

"The lifeblood of democracy is that you don't just have to follow one path. It's part of that lifeblood that there are always alternatives. But the German government is currently violating this basic rule in the most scandalous of ways. There's no question, in the future the country will need a smart mix of diverse energy sources, and that is why it is urgent to develop alternatives to nuclear energy. But the breakneck speed with which the government decided to hastily and permanently turn its back on the use of nuclear energy by 2022 makes a mockery of every democratic rule of procedure. It began with the repealing of the decision to extend nuclear life spans … which happened at the spur of the moment after Fukushima, without any discussion or reflection -- out of fear of the Greens (who have recently seen their influence increase dramatically in Germany)."

"Swiss Energy Minister Doris Leuthard, whose country determined not to build any more nuclear power plants and to abandon the use of atomic energy by 2034, said: 'We need time for this change, and we have that time.' This casual tone was painfully lacking in Germany. From the conservatives to the Greens, people competed to outdo each other in their proposals for how quickly the exit could happen. That damages reason."

"It is more astounding how radical the government here was in its refusal to consider alternatives. … And nobody seemed to be very upset by the fact that the committee Merkel convened to consider the issue of withdrawal was the cheeky 'ethics commission,' as if this were an ethical or moral issue rather than a question of practices and technological reason. Of the 14 members on the committee, the few who were proponents of nuclear energy were more or less silenced by the others. … And that is a victory for pugnacious democracy that lives on debate and doubt?" 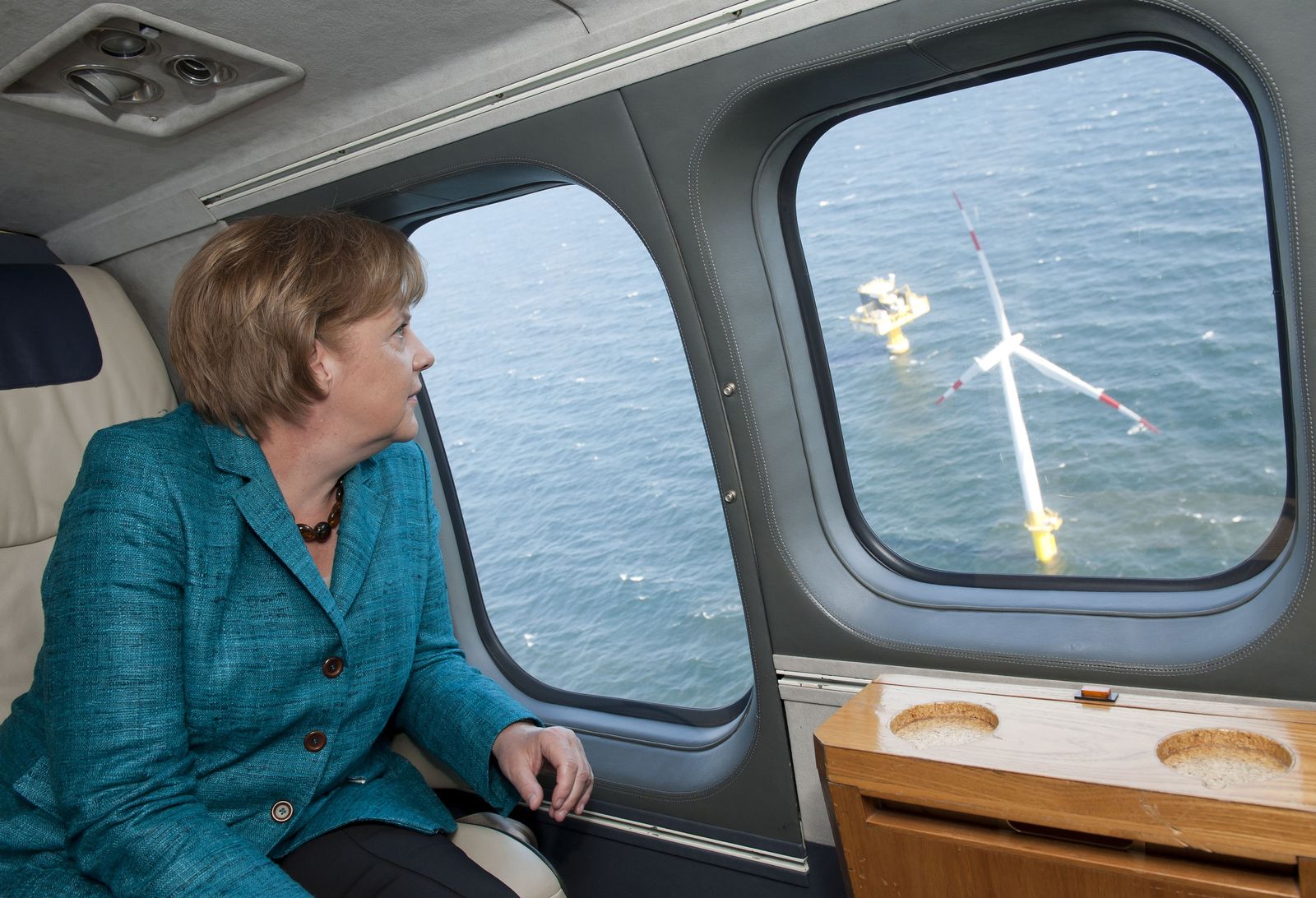 German Chancellor Angela Merkel is taking a potentially expensive gamble on the future by abandoning nuclear energy -- but it could pay off in a big way.