When he announced a referendum yesterday on the most recent euro rescue package, Greek Prime Minister Giorgios Papandreou put his own job on the line, as well as the future of the common currency. That wasn't quite the idea -- he wanted to save his job -- but now his government has to hustle to avoid collapse.

"I don't think the government will last until tonight," Costas Panagopoulos, Managing Director of the polling firm ALCO, told Reuters on Thursday, referring to new instability in Papandreou's ruling coalition. "Under these conditions a referendum is exactly what the country does not need," a finance ministry source added.

The aim of a referendum was to bolster support for Papandreou's government and avoid a snap election -- by giving Greek voters the right to weigh in on the harsh austerity measures demanded by the EU under the terms of the debt-rescue plan. "It was essentially overdue that the Greek people finally be asked what they want," the German economist Gustav Horn, from the Macroeconomic Policy Institute (IMK), told SPIEGEL this week. "The burdens being placed on their shoulders are too heavy to be legitimated solely by parliamentary decision."

But on Thursday Papandreou's influential finance minister, Evangelos Venizelos, came out against the referendum, and a crucial parliamentarian from Papandreou's party (PASOK) announced that she would not support the government in a confidence vote on Friday. That leaves Papandreou with a slender one-vote majority. Snap elections would follow if he loses the vote, and national elections on top of a referendum would bring the shape of the euro zone itself into doubt.

"At issue," Gustav Horn said to SPIEGEL, "is the question as to whether Greece should remain a member of the euro zone at all," and "if the result of the referendum is negative … one would probably see a Greek insolvency with all of the dramatic consequences for both Greece and for the rest of the euro zone."

Meanwhile, German Chancellor Angela Merkel and French President Nicolas Sarkozy vowed to save the euro no matter what -- by halting payments to Greece. And a new president of the European Central Bank, Mario Draghi, took over Tuesday to deal with the consequences of decisions made by his predecessor, Jean-Claude Trichet. The ECB has been criticized for betraying "German principles" under Trichet by designing a euro rescue mechanism that leaves even rich nations vulnerable to inflation. Chancellor Merkel has worked hard, against German sentiment, to gain support for the mechanism. That's one reason she was visibly disappointed by Papandreou at the G-20 summit on Wednesday in Cannes.

German commentators, in other words, had a lot to discuss on Thursday morning, and they were divided on the future of the euro.

"In Greece, where the people rose up against the noble classes 2,500 years ago and established popular rule -- right there is where the euro has bumped up against the limits imposed by democracy. That history's first cry for democratic rule was also a protest against debt, which sent more and more people in ancient times to jail, qualifies as a bitter historical irony."

"What should be obvious in a democratic society -- that the people should determine their own fate -- has achieved an odor of high treason under the pressure to save the euro. Crisis managers in Brussels, Paris and Berlin feel deceived (by Papandreou), and the markets feel cheated out of their last hope for an end to the trouble. Can the Greeks really just bat away Europe's helping hand?"

"But this is where wrong-headed rescue logic fails: Posing the currency union as an absolute goal ('If the euro fails, then Europe fails too') sets up not just a stress test for our democratic traditions, but an intolerable burden."

"The referendum is no real test of the people's will. The people have no choice. Rather, they have the choice between purgatorial fire and hell. If they're in their right minds, they'll choose the purgatorial fire. But that isn't certain. And here is where things become highly dangerous."

"There was an alternative to hearing the voice of the people -- namely a new election … But that would require the prime minister's resignation. This one isn't willing. Papandreou, whose party now has just 15 percent approval according to recent polls, has frequently argued that new elections in the midst of a crisis would be 'irresponsible.' The reason? They would bring Greece and Europe 'great insecurity.' In light of the nerve-racking trepidation ahead of both the country and Europe in the coming weeks, this sounds like a bad joke."

"Anyone who can't handle a referendum or an outstanding parliamentary decision needs to question their understanding of democracy. The current Greek government can be accused of many things, but not of failing to unite the people behind its politics -- or at least trying to provide as much legitimacy as possible for their actions."

"Right now in Germany these issues are more problematic. One could say that in Greece, the people are being asked about the future of their own country in Europe, while in Germany, not even the parliament makes that choice."

"What kind of a government is it that knows only secret and rushed decisions? It's supposed to bring stability, but creates permanent panic instead … The planned European Financial Stability Facility (EFSF) -- with its €700 billion in basic capital, its Luxembourg base, its immunity for personnel and its far-reaching powers -- is also fuelling an endless crisis. Discussion no longer focuses on freedom as the European idea. But the people or their representatives should at least be allowed to decide on its restriction."

"How was the farewell ceremony for the outgoing president of the European Central Bank, Jean-Claude Trichet, received by journalists, particularly the conservative ones? Trichet was branded a failure, a traitor to the constitution and to the mandate of the ECB. He was described as a Trojan horse for the French, infiltrating an organization crafted according to German principles. They depicted him in striking contrast to his predecessor, the unwavering, curly-haired Dutch politician Wim Duisenberg."

"What a cheap bit of polemics! That's not to say that all of Trichet's actions were compatible with the ECB's constitution ... but the attacks on his person are really uncalled for. When states pursue irresponsible fiscal policies and can no longer handle their debt load, then it is advisable, in a functioning society, to organize help from partner countries on governmental and parliamentary levels. But if they miss their opportunity to influence the failed financial policies of indebted countries, should the only institution capable of action, the ECB, simply sit idly by?" 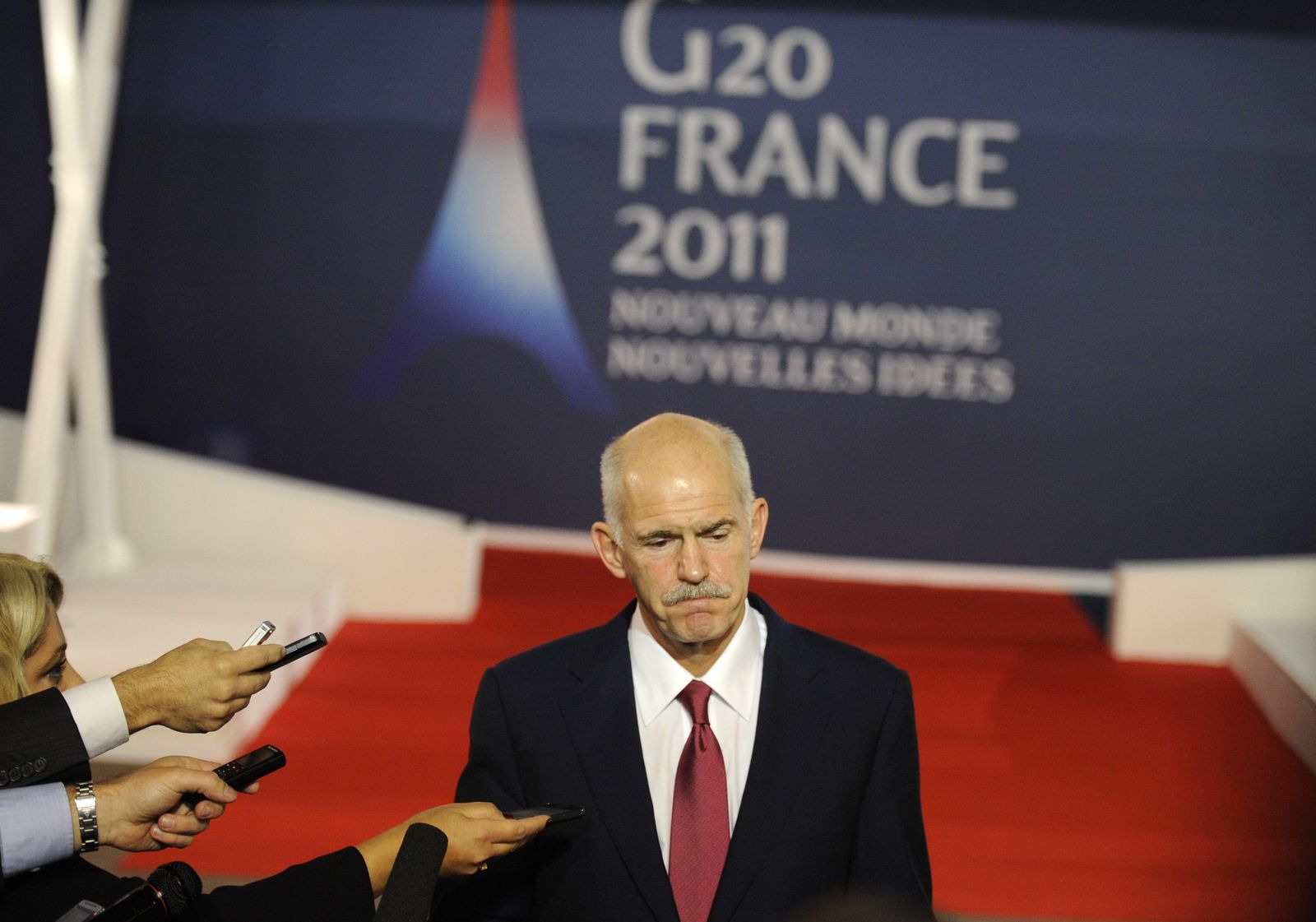 Greek Prime Minister Georgis Papandreou faces the press after crisis talks on the euro at the G-20 summit in Cannes on Wednesday.