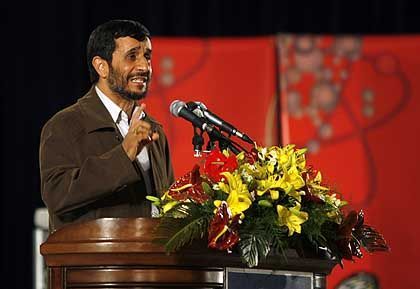 Ahmadinejad claims Iran has begun industrial-scale uranium enrichment -- an important milepost on the way to becoming a nuclear power.

Iran drew worldwide condemnation following its announcement on Mondaythat it had begun industrial-scale uranium enrichment, stoking Western fears that it has got another step closer to building a nuclear weapon.

German newspaper commentators say President Mahmoud Ahmadinejad is trying to stoke the diplomatic row with the West to distract from growing disenchantment with his domestic and foreign policies in Iran. Further sanctions are now likely but the West mustn't let Iran isolate itself any further or the world will lose what power it still has to control and monitor the country's nuclear program, commentators say.

"If the country is sealed off through self-isolation, sanctions and an international quarantine, the regime will probably take the North Korean route: stepping up the development of nuclear weapons as a bargaining tool for negotiations or for geostrategic power politics."

"Those in Europe or America who want to prevent that should make every effort to bind Iran into an international network of controls and cooperation to a greater extent than before. That, rather than confrontation, is the only way to reach the highest level of security in the nuclear arena that Western governments say they want to achieve in the region."

"For his announcement in Natanz, Ahmadinejad mobilized not only Iranian media but an audience of dozens of foreign diplomats and journalists. He seems to require a stage for self-portrayal at ever shorter intervals. Given the lack of concrete successes, the message increasingly isn't the event or its content, it's he himself."

"The Arab neighbors are already thinking about launching their own nuclear programs and America and Israel won't stand idly by indefinitely while their arch enemy builds itself a nuclear option. The Iranian nuclear program is the most pressing political problem facing the world -- especially because it is being worsened by the mess in Iraq and the new confrontation between Shiites and Sunnis."

"That's why one will have to try yet more rigorous sanctions. The measures the UN Security Council has passed so far have already begun to bite and started fuelling a debate in Tehran about the nuclear program. Ahmadinejad's grip on power isn't nearly as tight as his boastful declarations suggest. The European Union's offer to solve the crisis is generous and fair -- it will appear all the more lucrative when the price Iran is paying for its obstinacy starts to rise."

"The international community will have to get used to the prospect of an Iran with nuclear capabilities, it probably won't be able to stop Tehran, it's nuclear research program is on track."

"It's time to think about new strategies, about ways to tie Iran in as closely as possible and thereby arrive at a fairly reliable control of a nuclear Iran. It's time to start talking about a transparent partnership of security. There are pragmatic, influential Iranian circles that fear an increasing isolation of their country. These people want economic success, development and progress -- and all that is impossible under a rigid regime of sanctions and international isolation.

"The rational forces in Iran must be won over for a deal on equal terms, then there can be hope of taming a nuclear Iran."

"It's pure bluffing. The fact is that Iran is still far off from having the capability to build an atom bomb and even from being able to make the industrial fuel for the peaceful use of nuclear energy."

"In fact, things are getting increasingly tight for radical Islamist Ahmadinejad. The number of his critics, even from within the Islamic establishment is growing, as is discontent in the population. Foreign policy conflicts can save him: the bigger the better. This conflict strategy seems to be welcome in the West, especially in the US. Any provocation from the radicals in Tehran delivers fresh material to portray Iran as 'most dangerous enemy of world peace' to prepare the public psychologically for a possible military attack on Iran."

"From the US point of view this isn't just about the nuclear dispute -- they could have solved that through direct negotiations with Tehran long ago. Rather, this is about the role of Iran in the entire region: In Iraq, in Lebanon, in Palestine and Afghanistan. And it's about US hegemony in the Middle East. One has to ask what George W. Bush would do if it weren't for Ahmadinejad."