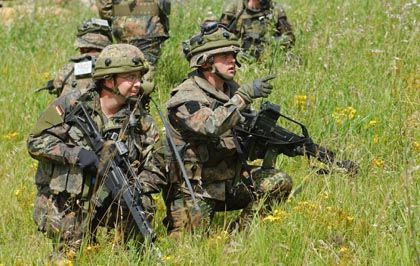 There are 3,500 German troops in Afghanistan, but some NATO allies think there should be more.

The halls were empty in Munich's Bayerische Hof hotel on Sunday morning. Fully 250 participants were on hand for the 44th Munich Conference on Security Policy, as was a small army of assistants and interpreters. But none of them were late for the Sunday session. After all, US Secretary of Defense Robert Gates was scheduled to speak. And everyone wanted to see if he was going to further intensify his criticism of Germany's engagement in NATO's Afghanistan operation.

They weren't disappointed. Following weeks of upping the pressure on Germany, urging the country to become more involved in military operations in Afghanistan, Gates poured it on once again. "We must not -- we cannot -- become a two-tiered alliance of those who are willing to fight and those who are not," Gates said. "Such a development ... would effectively destroy the alliance." Later in his speech, Gates said, "in NATO, some allies ought not to have the luxury of opting only for stability and civilian operations, thus forcing other allies to bear a disproportionate share of the fighting and the dying."

To German ears, such words are clearly intended for Berlin. After all, it was only in January that Gates sent a letter to his German counterpart, Franz-Josef Jung, asking for more German help in counterinsurgency operations in the southern part of Afghanistan. So far, Germany's 3,340 troops have largely concentrated on reconstruction and training in the relatively peaceful northern part of the country.

But Germany isn't the only European member of NATO that is having trouble satisfying the demands of Afghanistan while at the same time keeping the voters at home happy. France, Italy, Spain and Turkey all face public pressure to resist expanding operations or even to withdraw the forces they have already committed to Afghanistan. A Sunday poll in the German newsmagazine Focus indicated that 63 percent of Germans don't think the Afghanistan mission is in the country's best interests. And a survey done for German television at the beginning of February likewise found that 86 percent of Germans are against German troops becoming more deeply involved in the fighting.

A Direct Threat to European Security

Gates on Sunday sought to address those concerns. "I am concerned that many people on this continent may not comprehend the magnitude of the direct threat to European security," he said. "The threat posed by violent Islamic extremism is real -- and it is not going away. I am not indulging in scare tactics. Nor am I exaggerating either the threat or inflating the consequences of a victory for the extremists. Nor am I saying the extremists are 10 feet tall. The task before us is to fracture and destroy this movement in its infancy."

Germany has not stood idly by as the wave of criticism has broken over it. Politicians in Berlin are, according to a report in SPIEGEL, planning to increase Germany's contingent to 4,500 soldiers and widen its area of responsibility. And on Sunday, a number of politicians defended Berlin's contribution to Afghanistan. Guido Westerwelle, the head of the business-friendly FDP party said, "it makes no sense for us to reduce our largely successful mission in northern Afghanistan in order to take on further responsibilities elsewhere." Others suggested that northern Afghanistan is less violent because the German strategy of focusing on reconstruction has been more successful.

On Monday, German commentators got into the debate as well.

The business daily Handelsblatt sees a "deep tear" opening up in the trans-Atlantic alliance:

"Security debates in the US tend to focus on questions relating to where soldiers should be committed and how big the military force should be -- in the southern part of Afghanistan, for example. Germany and many other NATO partners think differently: They focus more on the exit strategy. How long must one's military be stationed in a crisis region? Is there not a different way to increase stability? There are good reasons why German Foreign Minister Frank-Walter Steinmeier emphasizes that security comes not just from the military, but also via trust and through disarmament."

"The superpower America reacts to crisis situations in Afghanistan with its stereotypical call for an extension of military operations. The Germans, though, think the reason for a lack of security in southern Afghanistan has to do with America's failure: There has been too much fighting and not enough reconstruction."

Center-left daily Süddeutsche Zeitung on Monday points its finger at Germany's politicians instead of across the Atlantic:

"As soon as the first thoughts (from the Conference on Security in Munich) on Afghanistan were made public, the German defense minister immediately felt the need to escape into denials and double meanings."

"It is absolutely necessary that Germany's politicians take the debate into the public realm. The country's citizens don't understand why the German army is stationed in Afghanistan. A shockingly high percentage of citizens think that Germany is waging a proxy war behalf of the Americans." The reason, the paper concludes, is clear: "Too little leadership."

The Financial Times Deutschland likewise argues that it is time for politicians in Berlin to act:

"The German government is aware that the Americans and other NATO partners are both morally and strategically right to demand a fairer distribution of risk in Afghanistan. Otherwise, it wouldn't bend to the pressure; otherwise, an increase in German troops wouldn't take shape after the Security Conference. Upping the German force is correct, but it's still not enough."

"The government is making a mistake if it thinks that it can satisfy demands for a fair risk distribution by becoming more engaged in areas outside the death zone. But they are still sending the message that the German army is not in Afghanistan to fight. ... The flip-flopping, and the fear of telling the public exactly what is necessary in Afghanistan, will come back to haunt Berlin. At the latest, this will happen when the NATO partners demand solidarity, and don't let Germany exit out the back door."

Gates' vision of a "two-tiered" alliance is "just as wrong as his demagogic accusation that the Europeans underestimate the danger presented by the Taliban and al-Qaida and thus are not as committed to combating this danger. In fact, NATO is threatened because its Afghanistan mission, based as it is on military operations, has been a failure. It seems even to have been counterproductive, because it strengthens Islamist fundamentalism and terrorism instead of weakening it. That's why demands in Germany and in other European NATO member states are becoming louder for a withdrawal from Afghanistan."