This week German Chancellor Angela Merkel has been busy keeping up appearances. For quite some time, Bavaria's Governor Horst Seehofer has been seeking to distinguish the party he leads -- the Christian Social Union (CSU) -- from its bigger sister party, Merkel's own conservative Christian Democratic Union (CDU). 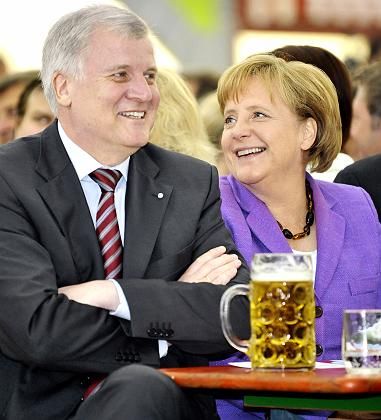 Pensions and taxes have been sources of discord in the run-up to Germany's general election on Sept. 27. And the latest bone of contention has had to do with the CSU's attitude toward the recent ruling by Germany's Constitutional Court on the Lisbon Treaty.

The court ruled that the Lisbon Treaty -- which is supposed to ease European Union decision-making -- was, in effect, in line with Germany's constitution and thereby could be ratified by the world's third largest economy and one of the powerhouses of the EU. However, the court, based in Karlsruhe, also attached conditions to their verdict saying that legislation needed to change so that the German parliament would have more say on certain decisions made in Brussels.

This decision was generally greeted with enthusiasm and relief -- except by the CSU, which came forward with a list of 14 demands they felt needed to be addressed in the new legislation. Accusations of Euro-skepticism went flying -- after all, it was a CSU member of parliament who led the challenge to the Lisbon Treaty -- as well as complaints that the CSU were deliberately holding up European integration. And these protests were coming not just from outside the CSU but from inside the party too.

As head of the CDU, Merkel was a guest at this week's CSU convention at Banz Abbey in Bavaria. There both she and Seehofer have been trying to present a more harmonious front while the two parties try to come to a compromise.

The governor of the German state of Hesse, Roland Koch, has also waded into the divisive debate. "To oppose (European integration) is the domain of the left parties -- and that's the way it should be," the CDU politician told the German business daily Handelsblatt in comments published on Wednesday. "I place great store in the fact that ... we will go into the general elections as a pro-European party -- I am certain this goes for the CSU too," he warned.

German commentators tended to agree with Koch, writing that the CSU's 14 points amounted, at the very least, to reckless electioneering and at the worst, to a crippling of the European Parliament and a setback for further European integration.

"Some of the requests Seehofer is making are not so absurd. At their heart, they make suggestions well worth considering -- mainly to do with binding the German people's elected representatives more closely to the decision-makers in the European parliament. But the CSU, with their typically populist zeal, are taking it too far."

"In the best-case scenario, Seehofer's foray will result in the German government having more of a voice in Brussels -- a voice that they can use appropriately. And also that German politicians will concern themselves with EU legislation earlier on -- instead of leaving these arduous details to their colleagues on the European committee."

"But in their undiluted form, the CSU's demands are endangering the whole EU decision-making process. Because the CSU seem to think that the German government should be concerned with every single issue."

"Whereas the Karlsruhe verdict only requires the German parliament to have a say when the EU seeks to expand, or go beyond, its powers. If the CSU starts to interfere it is in danger of virtually crippling the EU's largest member. Directives that affect all of the EU will stall because Germany couldn't find a compromise. Or, where no German participation is necessary, decisions will be made without reference to German interests. And the CSU wouldn't want either of those outcomes."

"A lot about the debate that Seehofer is conducting is deceptive. And his 'friends' in the CDU, especially Chancellor Merkel, should show this for what it is as quickly as they can. Populist propaganda in one of the most important member states of the EU is the last thing that Europe needs, while in the middle of the Lisbon Treaty's ratification process. There are plenty of ways in which these two scrappy sister parties can compromise on this issue. And now it's up to Merkel to make it happen."

"Anyone who has ever witnessed the wrangling in the ministries of Brussels or of the European Council will know how silly the CSU demands are. It is a sobering sight but a real one: For example, one clause can take hours of haggling. By the end, everyone has lost a little bit but they have also won because some problem has been solved -- usually a problem they couldn't have solved on their own. It is a time-consuming process and not always a transparent one -- but there is no better mechanism than this patient negotiation toward compromise."

"The Karlsruhe verdict clearly asks German parliamentarians to take more responsibility when it comes to EU decision-making. The verdict also requires that 'Europe' is accorded a higher status in German government. It's no secret in Berlin that anyone concerning themselves with European issues sits on the back benches. Those who want to go higher are quietly advised to find a more important subject. And that must change."

"With their verdict the German judges have -- mainly through their emphasis on German sovereignty and the state's core powers -- supported the CSU's natural urges to withdraw from the EU. But Germany must resist such impulses. Because we are all Europe now. And as always it's not what you say but how you say it -- this time that counts for the whole continent."

"Should the CDU be surprised at (the CSU's impudence)? Under Seehofer's leadership the CSU is behaving as is expected. One of its main goals is the return to a plus-50 percent paradise. To get there the CSU leader is taking every path that presents itself and following an old political tradition that says the party must make itself appear separate from the CDU. The voters are being sold this as a fight for independence, as brotherly compassion for the sister party. Its Bavarian logic: The chancellor can only remain the chancellor if the CSU do well in the election."

"And unfortunately to achieve that, the CSU need to give Angela Merkel a little kick in the shins every now and then. Seehofer is happy to accept damage to the limbs of other, more rebellious, CSU delegates as collateral damage."

"Merkel can't do much against such a political tradition except to note that her other opponents (note to the CSU: That's the SPD, the Greens and the Left Party) also have shins. She can however be grateful that the view from Berlin is different from that in Banz. After all, the CSU has never rejected the Lisbon Treaty. It's just that under Seehofer they are now making more noise, roaring like a lion -- albeit a lion caged in a zoo."

"The state of Bavaria was once an independent kingdom. Indeed among the middle European kingdoms of the second century it was one of the most important. So it is in the Bavarian blood to be cautious of sacrificing themselves to the German state. The fight between the CSU and CDU comes from out of Bavaria's domestic policy as well as out of personal motivations."

"And the power of those (CSU) demands comes from out of Bavaria's genetic make-up. No CSU leader could take on such a subject if the issue didn't mean so much to the majority of Bavarian voters."

"The EU can only achieve long-term stability if the member states feel that their sovereignty is appreciated -- then trust will grow rather than suspicion. And Munich has a quiet intuition, borne out of history, that signals when those in Brussels, or Berlin, should be reminded of this."