Last year the meeting between the Russian and German leadership that took place as part of the annual German-Russian Petersburg Dialogue forum happened under a storm cloud of criticism over the war with Georgia. This year, the two leaders meeting in Munich -- German Chancellor Angela Merkel and the new Russian President Dmitry Medvedev -- had to deal diplomatically with the murder of Chechen human rights activist and journalist Natalya Estemirova. 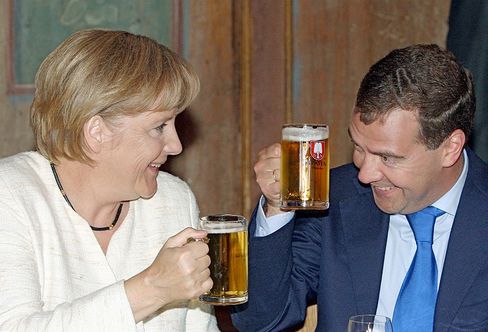 Merkel and Medvedev enjoy a lunchtime beer in Munich on Thursday.

But once that was dealt with -- and, according to reports, the potentially explosive issue was handled sensitively by both parties -- it was down to business. The Petersburg Dialogues were initiated by former German Chancellor Gerhard Schröder as a meeting between high-ranking politicians, media and businessmen from both countries, with the aim of encouraging mutual understanding and better relations between the two nations.

This year, the economy was high on the agenda. German companies have invested heavily in Russia -- exports to Russia increased by as much as 20 percent last year and look to be going even higher this year -- so news of a €500 million ($706 million) loan by the German state development bank to Russian banks, which would then be passed onto Russian businesses to ensure they could pay for those German imports, was greeted warmly. Germany has several big deals cooking with Russian firms too, for example involving a possible rescue for Wadan Yards, a struggling shipyard company on Germany's Mecklenburg-Western Pomerania coast. Opel, the troubled German car manufacturer, may also potentially be bailed out by a consortium including Russian concerns.

German commentators writing in Friday's newspapers generally considered the meeting a success -- in some cases, simply because there had been a friendly meeting between the two powers. In the past, Merkel has been criticized for upsetting mutual business interests with her complaints about Russia. But most were cautious with their praise of the summit, advocating realism and suggesting that it would be more than foolhardy to see the Russians as white knights coming to German companies' financial rescue.

Conservative newspaper Die Welt writes that, although the meeting between the Russian and German leaders only touched lightly on more controversial issues between the two nations, it was a useful exercise:

"The consultation that took place between the German and Russian states, as part of the traditional Petersburg Dialogues, probably aroused more interest around Europe and across the Atlantic than it did in Germany itself. Here, it's just routine. And it seems that the global recession has further encouraged the special relationship between Germany and Russia."

"Concrete results included talks about how the fight against organized crime should proceed, the founding of a German-Russian energy agency, an agreement to co-operate more in science and research, the delivery of Siemens-built trains to Russia, the upgrade of St Petersburg's airport and the establishment of a joint educational and research centre for international logistics and supply chain management in St Petersburg."

"So far, so good. But for the German businesses, the biggest question mark still stood over Russian security and legal stability for business. Medvedev never tires of complaining about what he calls 'legal nihilism' -- but there's not a lot he can do about it. So thoughts on Russian law and the Russian fight against corruption remain unspoken reservations in German business circles."

"The issues of human rights, the situation in the Caucasus as well as Georgia and Ukraine with their views on the West are such difficult subjects that there's no doubt that both sides were happy only to have to touch upon them briefly. But certain subjects -- geopolitical questions in which Russia plays a key role and vital German interests lie -- could not be avoided. These range from climate change to energy security to the containment of Iran's nuclear ambitions."

"A summit like this one in Munich is good and proper. Important contracts have been signed. But perhaps they are most important as an experience -- they create a stockpile of trust in the good times, in preparation for the bad times. How the trade agreements signed in Munich stack up against Russian reality has yet to be seen. The main thing is that one side spoke to the other."

The center-left Süddeutsche Zeitung writes that a realistic outlook is needed when it comes to Russian financial aid:

"In hard times there is a big desire for a helping hand. So it is understandable that shipyard workers in Wismar and Rostock had set hopeful sights on Bavaria where German Chancellor Angela Merkel was meeting with Russian President Dmitry Medvedev. The employees at the Opel plants in Bochum and Rüsselsheim are also betting on a Russian rescue."

"So it was obvious that Merkel and Medvedev would be talking about the fate of the shipyard company Wadan Yards, which can no longer be supported by their Russian owners, as well as the proposed takeover of Opel by Russian auto parts manufacturer Magna, which will only be possible with the support of Russia's largest bank, Sberbank."

"And it's good that Merkel and Medvedev are talking about these things. But their power to fulfill the high hopes of those workers is limited. When it comes to the Wadan shipyards, the talk is of billions from the Russian gas giant Gazprom. Whether a subsidiary of Gazprom is actually going to order liquid gas tankers (in a bid to help out the shipyard) is uncertain. And in the Opel case nothing new was really established either. It couldn't be. Neither Merkel nor Medvedev can know the outcome of negotiations between (Opel owner) General Motors and those interested in buying Opel."

"The German stereotype of Russian misery has been replaced by naive beliefs about boundless Russian riches. However Russia has been hit harder by the global financial crisis than many others. And political dreams can shatter in the face of economic realities. Even in Russia."

Business daily Handelsblatt writes about the ironic turnaround in German attitudes toward wealthy Russians and counsels realism and caution:

"Suddenly the Russians are being welcomed as rescuers. Indeed they must be. But it's an odd thing, because just one short year ago, the German government actually came up with an extra law saying that they would play a deciding role should those national companies made big by petro-dollars -- particularly those that had been spoon-fed by the Kremlin -- decide to buy up German businesses. How the economic crisis has changed things."

"So now the Russians suddenly come in from the cold, looking like rescuers. That is even more wondrous considering the economic situation in the giant country: At the moment Russia is hit far harder by the worldwide economic crisis than other nations."

"Gas production is being reduced because demand for natural gas has dropped drastically. Gazprom's export earnings are also dropping and the Kremlin just pruned their investment program by 16 percent. And now Gazprom subsidiaries are going to fill the order books of Mecklenburg's Wadan shipyards? That is a naive idea."

"This crisis should make two things clear to German business and German politicians. The outlook in Russia is far more devastating than one generally hears about here. The Kremlin must finally do its homework -- it can no longer lie back and relax on those plump cushions, fattened by petro-dollars. And secondly, in dealings with Russia it is helpful, above all, to be realistic. Neither calling them bad names or talking them up as some sort of white knight does anyone any good."