On Tuesday, the German parliament took the unusual step of issuing a joint declaration condemning the series of murders allegedly carried out over seven years by a trio of neo-Nazis based in eastern Germany. German papers were filled Wednesday with images of Chancellor Angela Merkel and members of her cabinet standing with their heads bowed on the floor of the Bundestag. Their statement said: "We are deeply ashamed."

Merkel spoke again on the issue in the Bundestag on Wednesday, saying: "These acts are nothing less than an attack on our democratic community." She said the decision to issue a joint declaration on the murders demonstrates "that we are determined to defend our open, tolerant and humane society against vicious criminals and hate-based ideologies." German President Christian Wulff was scheduled to hold a meeting with family members of the victims on Wednesday.

Merkel and her government have been criticized in the press for taking too long and lacking the appropriate words or gestures in response to revelations that the series of murders was allegedly carried out by a group of neo-Nazi terrorists. News broke about the connection of right-wing extremists to the murders in early November, when two members of the trio were found dead in a motor home in the eastern German city of Eisenach. Authorities believe that up to 20 people may have assisted the cell, which is suspected of killing one policewoman and at least nine immigrants across Germany. Many of the victims were small businessmen of Turkish origin.

The revelations have reopened debate in Germany over how to best fight right-wing extremism and what to do about the country's far-right political parties. The former German Interior Minister Otto Schily, of the Social Democrats, said in an interview with the German newsmagazine Stern that he favors a new attempt at banning the far-right NPD party. The Federal Constitutional Court halted an attempt to ban the party in 2003, because the NPD's leadership included informants who were in the pay of the country's domestic intelligence agency.

The current interior minister, Hans-Peter Friedrich, reportedly is looking for a way to ban the NPD without stopping the use of informants, which would mean that the authorities would lose a valuable source of information about the party. The departing Israeli ambassador to Berlin, Yoram Ben-Zeev, has also called for a ban of the party. He told the mass circulation daily Bild: "Democracies must fight against such things. I don't want to draw comparisons, but the Nazis were also a legitimate party. They came to power in a legitimate way."

German commentators weighed in on the issue Wednesday, with some taking the government to task for not adopting a stronger stance sooner.

"It is no accident that the far-right gang of killers came from Jena (in former East Germany) and not Detmold (in western Germany)… Nowhere has the right-wing milieu blossomed as much as it has in the former East Germany. Nowhere have so many police officers turned a blind eye, sometimes out of sympathy for the neo-Nazis, sometimes out of fear for their own families. In the east, democracy has been laughed off for many years, also in the horribly useless courts."

"And now, as the trail of blood is visible and runs from Thuringia straight through the country, it took a long time before the Bundestag offered its gesture of sympathy. The president had to take the initiative and on Wednesday is meeting with family members of the victims, who were once suspected of being involved in organized crime."

"The government's reaction came too late, and it is questionable how much determination it will show in getting to the roots of the evil. It is a thankless task for politicians, who fear nothing more than to frighten voters … especially in the east. How is it, that, of all things, it is often the children of former anti-fascists (i.e. people who lived in communist East Germany) who join up with the neo-Nazis? Is the generation taking revenge on its socialist parents, just like the far-left Red Army Faction once did with its Nazi fathers?"

"A group of Nazi terrorists has dealt a severe blow to Germany. Ten murders of immigrants and a police officer, 14 robberies and at least one bombing - that is the tentative tally of an unprecedented terrorism spree in the post-war history of German right-wing radicalism."

"The case has led to a terrified stiffness among politicians. More than two weeks have passed since the death of the terror duo Uwe Böhnhardt and Uwe Mundlos in their motor home. But top government leaders have still not found the right words, or offered comforting gestures. Nothing took place to help bring the victims, family members of the dead, or the stunned public together in a sorrowful, but democratic sense of community."

"It took days before insight was gained into the fact that German security agencies for years had harassed the victims and their families under mortifying suspicions, instead of focusing on the real perpetrators. Then the federal integration commissioner invited organizations representing foreigners to the Chancellery, instead of the affected families. The justice minister promised some compensation from an unknown 'victims fund,' and the interior minister offered up blanket apologies for all the mistakes of the law enforcement agencies."

"The chancellor found suitable words when she spoke of a 'disgrace for Germany.' But the chancellor's office, the federal president, and the president of the Bundestag spent a week and a half searching for the right form, location, and content for a suitable commemoration. They were trying to fight the fatal impression that in Germany it is not important what happens to terror victims and their families."

"It is a symbol that willl remain in the memory for a long time: the members of the Bundestag and of the German cabinet lowering their heads and partaking in a moment of silence as a gesture of sympathy and apology for the victims of right-wing extremist violence. It came late, but still came nevertheless. The president of the Bundestag also found the right words for the friends and relatives of the victims, several of whom were themselves considered suspects in the murders during the investigations. Empathy can be a balm on their wounded souls. A small token that could have a great effect would be providing compensation for the surviving victims and relatives and dependants…"

"There must be a societal push to determine how, where and why right-wing extremism is growing in Germany. Yet no one knows how far the organized scene extends. What is good is that everyone in parliament wants to see a dedicated involvement against right-wing extremism that can help impede it. It would be better if there were enough money to fight extremism. ... Our democratic principles have to be protected -- each and every day." 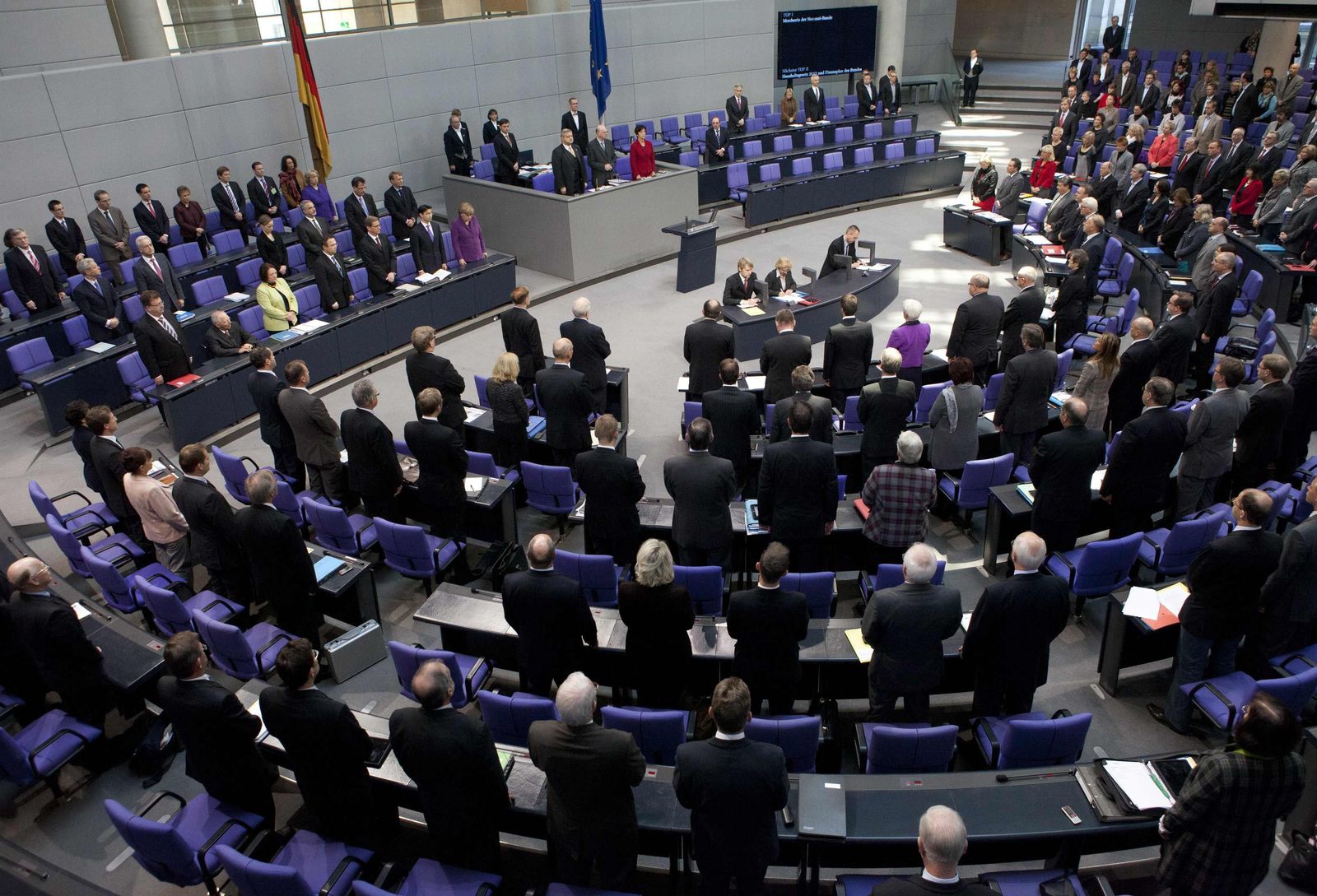 Deputies observe a minute of silence during a session of the Bundestag on Tuesday.